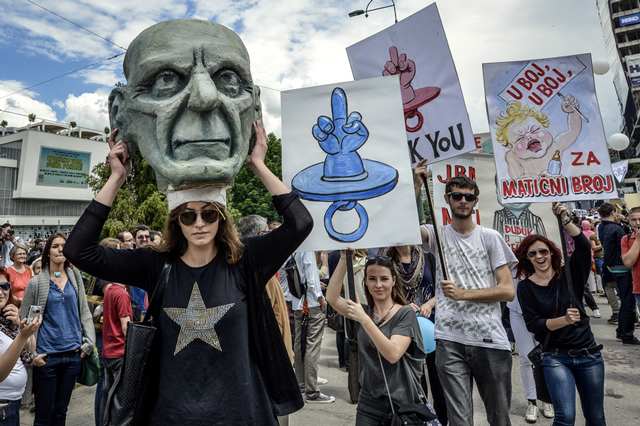 Crowds hold up signs as they demonstrate in front of the Bosnian parliament building in Sarajevo demanding laws for personal identification numbers for newborns. (Photo: Sulejman Omerbasic / Demotix)

In the shadow of events in Turkey and Brazil, Bosnians have been taking to the streets. For over a week, citizens of the small Balkan country have been protesting their leaders’ failure to pass a new law on citizen identification numbers, leaving babies unable to travel for medical care. Milana Knezevic writes

As is often the case in Bosnia, this seemingly straightforward task soon took on an ethnic element. Serbian parliamentarians wanted the number to recognize the internal geographic split between the Serb majority entity Republika Srpska and the the Croat Bosniak majority Bosnian Federation. Their Croat and Bosniak counterparts disagree.

The political stalemate means that since February newborns in Bosnia have not been able to get passports.

Last Wednesday, activists organised a car blockade of parliament in Sarajevo. The impromptu show of support for Belmina Ibrisevic, a seriously ill infant who could not travel abroad to get treatment, quickly grew until several thousand people surrounded the building, trapping parliamentarians inside.

“It [the protest] is about those few brave citizens who decided to take a risk and react. Others came, following basic instinct and their conscience”, says Sarajevo-based activist and political commentator Nedim Jahic.

On Monday, the leaderless “babylution” took the shape of a tribute to baby Berina Hamidovic, who died at a hospital in Belgrade. After weeks of pleading with authorities, her parents decided to take her across the border without a passport.

“My Berina has died, because to Bosnian authorities she wasn’t alive”, father Emir told local press.

On Tuesday, some of Bosnia’s biggest music acts stepped onto a makeshift stage outside parliament. Behind them, projected onto the parliament building, loomed the image of a giant pacifier in the shape of defiant fist. It is estimated some 10,000 people gathered to see the show. Meanwhile, citizens of Tuzla, Mostar, and other cities have also organised demonstrations under the banner of “JMBG”, the name of the ID law. The official facebook page has 22,000 likes and counting, where photos, videos and articles are widely shared. People from across the world have tweeted and facebooked messages of support, as have some of the biggest stars of the region. Combined, this makes for a remarkable, country-wide wave of political expression not seen for years.

This is not the only time Bosnia’s leaders have been unwilling and unable to make important decisions. The complex system of ethnicity-based quotas and vetoes implemented with the 1995 Dayton peace agreement to accommodate Bosniak, Croat and Serb leaders, has led to political paralysis on a number of occasions.

“The timing was important was an important reason for people reacting the way they have in this particular case”, explains Florian Bieber, Professor in South East European Studies at the University of Graz, and a leading expert on post-war Bosnia. “Frustration had been accumulating over time, especially with the deteriorating economic situation. This is an issue that affects everyone, not only one group, which helped galvanised support across the population. It also has a human face. It’s not about losing money; it’s about lack of ID numbers risking children’s lives”.

The size and scope of the protests is not to be underestimated. The feeling of unity invites comparisons to the anti-war protests of 1992. Much has particularly been made of seemingly cross-ethnic nature of the demonstrations. But while it is certainly the case that Serbs, Croats and Bosniaks alike have been taking part and expressing solidarity, the movement has largely been confined to the Bosnian Federation. Recent student protests in Banja Luka, while likely inspired by the nationwide atmosphere of protest, have distanced themselves from the message of JMBG.

“Today’s protests are also important, however, without significant number of citizens from Republika Srpska, it is hard to expect real change. In todays’ conditions and political structure of Bosnia and Herzegovina, you cannot expect to have change and efficient pressure without relevant support coming from both entities, which is rarely the case”, Jahic concedes.

Politicians have also been unwilling to cooperate thus far. Some parliamentarians have refused to come back to work citing security fears, while Bakir Izetbegovic, the Bosnian representative to the three-member presidency, has urged people not to take to the streets.

Despite this, the movement rumbles on. The protesters have given the politicians a deadline of 30th June to resolve the ID number debacle, and Jahic says the first priority is to “see results on the directly addressed issue.” However, protesters have also demanded that politicians, who earn approximately six times the national average, take a 30% wage cut and place the money in a fund for Bosnians who need medical treatment abroad. This appears to invoke the frustration and anger about the general state of the country helping drive the scale of the protests.

While Bieber is uncertain whether the demands will be met and the elites will change their ways, he does believe this could be a turning point for the country.

“Even if they fail, the protests have made citizens feel they can achieve something”.