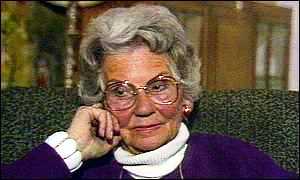 Mary Whitehouse was a shrill provocateur on a relentless crusade to stifle, oppress and scare, writes
Padraig Reidy

Mary Whitehouse has always been a peripheral idea in my life — one of those puppets on Spitting Image I never really recognised as a child, but laughed at anyway, because if I didn’t seem to be paying attention, my parents might revoke the ‘being allowed up late to watch Spitting Image’ licence they had so generously granted.

Later, in my smart-arsed adolescence, came the Mary Whitehouse Experience, the apotheosis of smart-arsed comedy. I don’t think I really knew where the name came from, save from the notion of some batty old woman.

That batty old woman turned up again last night, in the BBC’s Filth: The Mary Whitehouse Story. Whitehouse herself was played by Julie Walters, which, to me at least, immediately makes her a sympathetic character: everyone likes Julie Walters, not least because she generally plays likeable people. The casting directors might claim they merely picked a great actor (and Walters is a great actor) but I can’t help being reminded of the casting of Brad Pitt as an IRA volunteer in The Devil’s Own: back then, the producers furiously rebuffed notions that they were “glamorising” the IRA, but, being honest, the very fact of casting Pitt had to imply glamour. Pitt is intrinsically glamorous, and Walters is intrinsically likeable.

There does seem, at the BBC, to be a collective Gene Hunt Syndrome infecting all commissions dealing with the 60s and early 70s. DI Gene Hunt was, of course, the bad copper of the first series of Life on Mars, a bitter, thin-lipped bigot: by the time spin-off Ashes to Ashes came round, Hunt had become a lovable, rough round the edges but essentially decent bloke. ‘Gloriously un-PC’ as many had it.

More worrying was the near-rehabilitation of Enoch Powell during the recent, disastrously arrogantly titled ‘White Season’ (the entire thrust of which seemed to be to prove that white working class people are racists whose only concerns are immigration and Islam; the highlight of which was seeing the curious alliance of Bob Crow and John Gaunt berating the BBC on Newsnight).

The BBC’s documentary on Powell and his ‘rivers of blood’ speech (not a phrase he used, by the way) could not stop reminding us of what a brilliant man he was, implying that he had in fact, been prescient on future racial tensions (though what Powell was talking about was not ‘racial tensions’, it was proper, full-on race war of the kind now only normally discussed on the Stormfront message board).

And so with Whitehouse, who, we now discover, was not a censorious, evangelical bigot (cut, as Nancy Banks Smith points out in today’s Guardian, from the same cloth as Margaret Thatcher) but a decent woman lost and confused in the licentious 60s. Balderdash and, indeed, piffle. Whitehouse was a shrill provocateur on a relentless crusade (or jihad, if you prefer) to stifle, oppress and scare: witness her furious pursual of Gay News’s Denis Lemon, who became the last man to be found guilty of blasphemous libel in this country after he published James Kirkup’s The Love That Dares To Speak Its Name: witness her outrage at Howard Brenton’s Romans In Britain. These campaigns were not the work of a woman merely behind the times, or at odds with the more decadent aspects of the age, as the BBC’s drama had it: rather, they were the work of an unrepentant bigot. We should not imagine Whitehouse as any different, and we should guard against the re-emergence of her spirit.