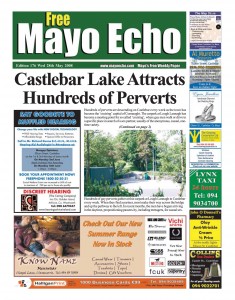 A popular community-based website in the west of Ireland was forced to cease operating last week in the fallout that followed the publication of an inflammatory article in a local newpaper attacking alleged gay ‘perverts’.

The article, penned by Tony Geraghty, editor and proprietor of local freesheet, the Mayo Echo, provoked widespread debate on Irish web forums. This quite startling front-page article, which reads like a bad Onion spoof, told the story of a recreational area in Castlebar, Co Mayo being transformed into a latter day Sodom, with hundreds of men visiting on a weekly basis to have anonymous sex with strangers, propositioning young boys, and getting their rocks off whilst thumbing through children’s magazines. Perhaps most horrifying, the article described ‘drooling perverts getting off whilst watching children’ playing at an adjacent playground.

‘Castlebar lake attracts hundreds of perverts’, read the headline. Mr Geraghty’s appeal to outrage, spread across several pages, contained terrifying conclusions, noting these sordid shenanigans ‘might lead to sexual attacks in the future’. Not content with such bristling polemic, Mr Geraghty decided that the public interest would best be served by the publications of photographs, which included one of an alleged ‘pervert’; a car, which, lest the reader be short of sight, was accompanied by a close up of its registration plate; and the truly gruesome sight, sure to shock befuddled of Ballinasloe, of discarded condoms and tissues lying close to pages from a ‘boys’ magazine’.

Men, the reader was informed, were travelling from as far afield as Galway and Donegal, to cavort in the bushes in broad daylight, just yards away from a playground, in the west of Ireland’s number one cruising spot. The Irish police force, the Garda Siochana, we were told, had been conducting an undercover operation for many months, leading to several recent arrests, and had received numerous complaints (although clearly not as many as our intrepid reporter). But more on this later.

Castlebar.ie was a tremendously popular local website, receiving as many as three million hits per month – or at least it did up until last Saturday, when the site announced on its main page that it had been ‘forced to cease operation after more than 10 years of publication [due to] threats of legal action received from a commercial publication based in Castlebar’, which it identified as the Mayo Echo. Editor Geraghty had objected to critcism of his article, and him, on the site’s very active forum. Indeed, an email from Mr Geraghty, previously available on Castlebar.ie, read:

‘I would like to express my utter disgust at postings placed on your website www.castlebar.ie on the ‘Online Forum’… There is lengthy discussion of an article published in the Mayo Echo this week, and some of the comments are completely unacceptable, untrue, and completely defamatory to myself…

‘I am completely in favour of the principle of a free press, freedom of expression, and the free exchange of ideas, but with such rights come responsibilities, both legal and moral.

‘I hereby formally call on you to ensure the following:

‘That the offending postings are removed immediately.

‘That at the first opportunity, a mutually agreed full and unequivocal apology be made to myself, and to the Mayo Echo, admitting that the comments made are unsubstantiated, untrue and are withdrawn forthwith.

‘I am also seeking any information or data that might identify those persons that contributed these postings, IP address etc. I am also requesting the identities of the moderators that monitor and vet the postings.’

The offending posts were removed, and, it is understood that the website issued an ‘unreserved and unequivocal apology’ – the first time in its history it had done so. But the unremitting cloud of legal threats finally forced that site administrator’s hand into shutting the site down entirely.

RTE’s Liveline, presented by Joe Duffy, is one of the most the most popular radio shows in Ireland, offering a platform to the indignant and the irritable to vent their spleen. Covering issues from Spanish exchange students conversing too loudly on buses, to more serious matters like political corruption, fraudulent trading, and medical malpractice scandal, the show has long been compulsory listening. Tuesday’s show opened with Mr Geraghty, in bullish form, reiterating his allegations and attempting to copper fasten his new found fame as a zealous crusader for public morality.

A flood of calls followed.

One of the first to respond was Frank O’Grady, a representative of regional gay rights group OutWest. Earlier in the week, his organisation had issued a statement claiming that Mr Geraghty’s allegations were ‘unfounded’. We didn’t just have to take Mr O’Grady’s word for it, however, because O’Grady had taken the eminently sensible step of making official contact with the Garda Siochana. A superintendent had confirmed to OutWest that, not only had no arrests been made, but there was no ongoing operation regarding the matter. In fact, the Gardaí had not received a single complaint.

A local councillor, Michael Kilcoyne, went on the record stating that he was appalled by the allegations, ‘which [have] no basis in fact whatsoever’. Several further callers, many locals, both gay and straight, called to register their disgust at the article and its casual linking of homosexuality to paedophilia. One caller, who claimed to live a ‘stone’s throw away’ from the lake, expressed his disbelief at the allegations. Councillor Brendan Hennigan was particularly scathing in his criticism, claiming that the allegations were ‘outrageous’, and had scared local people away from their recreational area. When he pushed Mr Geraghty on the matter of the photographs, the editor’s excuse for publishing the registration number bordered on the absurd; claiming that the type of car was ‘rare enough’, but many people drove similar cars in the area, and he feared reprisals against their innocent owners. More incredible still was Mr Geraghty’s claim that it was his duty to ensure that families should ‘be aware of what their fathers and brothers’ were up to.

There were isolated expressions of support for Mr Geraghty’s bravery, although tellingly, none of these came from Castlebar natives. The majority were more or less united in objecting to the shrill nature of the piece, labelling it as incitement to hatred. One elderly caller spoke of his sadness at having his community site, a window to the world and a source of business, closed down by the legal threats. Another caller forced Mr Geraghty into furious backtracking regarding the nature of the images from ‘boys’ magazines’ found at the site, which turned out to be nothing more malign than the Dandy, home of Desperate Dan and Beryl the Peril. Nonetheless, Mr Geraghty made the bizarre claim that the comic had been used for ‘sexual gratification’.

As it stands, Castlebar.ie is still offline. Meanwhile, in this week’s edition of the Mayo Echo, Geraghty has treated us to a further two-page polemic concerning the response to last week’s sensational piece of journalism. ‘One of the principles of good journalism is that the journalist should not become the story,’ it begins. With an apparent absence of irony, he pontificates further on the issue of free speech, before railing at the injustice of it all:

‘It seems in this modern day that there are certain groups we simply are not alloyed [sic] to discuss. When we talk about issues of concern with some members of the travelling community, we are immediately labelled as anti-traveller, despite the issues raised being completely true, and of legitimate concern to the public. When we raise some societal challenges being faced due to the sudden influx of foreigners (almost a no-go word in itself), we are accused of being racist. And when we raise issues clearly of concern to our own community concerning a practice among some members of the gay community, we are accused of being anti-gay. In this era of over-the-top political correctness, it seems the only acceptable topic for discussion is the weather, and GAA.’