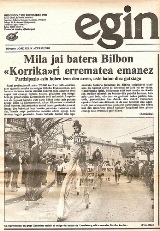 The Basque daily was closed down 10 years ago today, signalling the beginning of the Spanish government’s repression of left-wing nationalist media, writes Angelo Miotto

It was called Egin, which in Basque means to do, to act. A daily paper printing 10,000 copies, its editorial office was situated in the Polygon Heciago, an industrial compound in the vicinity of Hernani. It was a low building, and hosted on its roof the aerial of Egin Irratia, the radio station. On 15 July 1998 the doors of the building were blocked by the seals of the Spanish judiciary. Both the newspaper and the radio station were shut down by policemen in balaclavas and helmets.

They stopped the rotary press, destroyed machinery and ravaged the archives of the radio. This was called a ‘precautionary suspension’ and was accompanied by the investigation and arrests of the directors of the newspaper, the editor Javier Salutregi and the assistant editor Teresa Toda.

The charge was that the newsapaper received money from ETA, the armed Basque organisation, and that ETA was dictating the editorial line.

The process that kept the accused people under physical and psychological pressure for nine years, showed an absolute lack of evidence. Rather, the evidence ‘does not exist any more’, says Marian Ferrer, a respected journalist and spokesman of 18/98+ platform. It is gone. As is the charge of receiving money from ETA, (which, in the course of the process turned into the charge of giving money to ETA, to the astonishment of defence laywers).

‘18/98’ was the code number of the judicial procedure, and the 18/98+ platform is an organisation that supports all those people that have been charged, accused, jailed or tortured. The two most famous people supported by the 18/98+ platform are Teresa Toda, accused of terrorism and jailed since 1 December 2007 without a sentence, and Martxelo Otamendi, editor of the closed newspaper Euskaldunon Egunkaria, who was imprisoned and tortured.

Egin was launched in 1977, amid increasing demand in Basque society for Basque news sources. Spain’s transition to democracy had begun, and the big editorial groups were adapting to new times.

Egin displayed a new approach in its headlines, layout and front-page pictures. Egin also had a foreign affairs section independent of the big press agencies, and a team of investigative journalists, coordinated by Pepe Rei, that uncovered many stories on the drugs trade over the years. The newspaper suffered the loss of managing editor Jusu Muguruza, of Egin, who was elected to the Spanish parliament in 1989 and killed on 20 November of that year, on the eve of his first parliamentary session.

During the darkest days of the Basque conflict, the press campaigns orchestrated by the Spanish interior minister created a kind of axiom — ‘Egin points, ETA shoots’, that began to spread.

A few hours before the closure of the editorial office, the editors got organised. The day after, hundreds of copies were printed using a registered old heading, Euskadi Informacion. Egin’s readers photocopied, stapled and distributed those few copies.

On the front page there was a large picture in black and white, portraying two hooded agents sealing the editorial office. The headline said: ‘Egingo dugu’, roughly translating as ‘here is Egin’, a challenge by those who managed to resist censorship.

From the ashes of Egin a new project emerged: Gara (from the Basque, ‘we are’). It was set up with money gathered in the smallest and most secluded villages, the bigger cities and foreign countries. All that is left of Egin today is the rotten rooms of the editorial office, with diaries on the tables and layers of dust, dirt and mould — 10 years on from a ‘precautionary suspension’.

Angelo Miotto is news editor of peacereporter.net, where a longer version of this article originally appeared