DEFAULT
One word of truth
04 Aug 2008
BY NATASHA SCHMIDT

In his Nobel Prize acceptance speech, Alexander Solzhenitsyn made an appeal to the writers of the world. Index was proud to be the first publication to print his call to action in English and marks his death last weekend with the following excerpt 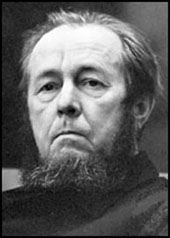 I am heartened by a vivid awareness of world literature as a single great heart, throbbing over the world’s cares and sorrows, even though they appear in different forms and guises in each separate corner of the world.

But today there is an interaction between the writers of one country and the writers and readers of another which is, if not instantaneous, then at least very close to it, as I myself have experienced. My books, unpublished, alas, in my own country, have swiftly met with responsive readers in the world outside in spite of hasty and often slipshod translations. Critical analyses of them have been produced by such outstanding western writers as Heinrich Böll. Over these last years, when my work and liberty have not collapsed, when they have been sustained against all laws of gravity as though in mid-air, as though resting on nothing – on a wordless tautly stretched membrane of public sympathy – I have become aware with the warmest gratitude of something that came as a complete surprise to me, namely, the support of a worldwide brotherhood of writers. On my fiftieth birthday I was astonished to receive the congratulations of famous European writers. Thereafter no sort of pressure on me was able to pass unnoticed. During the weeks of my expulsion from the Writers’ Union, a time extremely dangerous to me, I was shielded from worse repressions by a defensive wall raised about me by the world’s famous writers, and the writers and artists of Norway hospitably offered me a roof over my head in case the threatened exile from my homeland should take place. Finally, my very nomination for the Nobel Prize was put forward not from the country where I live and write, but by François Mauriac and his colleagues. And afterwards entire national writers’ organisations expressed their support for me.

And so I have come to realise, and have personal experience of the fact, that world literature is no longer an abstract graph, no longer a generalisation constructed by literary experts, but a common body and common soul, a living responsive unity reflecting the growing spiritual unity of mankind. State frontiers are still glowing crimson, inflamed by electrified barbed wire and bursts of machine gun fire: some ministries of internal affairs still suppose that literature too is the ‘internal affair’ of the countries under their jurisdiction; and it is still possible to see newspaper headlines: ‘They have no right to interfere in our internal affairs!’ But meanwhile there are no internal affairs left on this cramped globe of ours. And mankind can only be saved if everybody takes an interest in everybody else’s affairs, if the people of the East cease to be indifferent to what is thought in the West and if people in the West cease to be indifferent to what is happening in the East. And literature, one of the most delicate and responsive instruments at the disposal of human beings, has been one of the first to apprehend, assimilate, and sustain this sense of mankind’s growing unity. And now I address myself to the world literature of today, to hundreds of friends whom I have never met in the flesh and perhaps shall never meet.

Friends! Let us lend a hand ourselves if we are worth any thing at all! Who, in our own countries, riven by the wranglings of parties, movements, castes and groups, has acted from time immemorial not as a divisive force but a unifying one? This essentially is the rôle of the writers, embodiers of the national language, which is the main tie that binds a nation, binds the very earth a people occupies and, in happy instances, the national soul itself.

I think it is within the power of world literature in these troubled times to help mankind (in spite of what is being dinned into it by prejudiced individuals and parties) truly to comprehend its own nature and to transfer concentrated experiences from some of its parts to the others, so that we might cease to see double and be dazzled and so that the divisions on our scales could be matched, thus giving certain peoples a faithful, concise and true picture of the history of others with that same force of recognition and painful actuality as if they had lived through it themselves – and thereby safeguarding them from making the same errors so much later. And we ourselves perhaps may learn to develop in ourselves a world vision. Using the centre of the eye, like everybody else, to see what is near, we can begin to use the corners of our eyes to take in what is happening in the rest of the world. And we shall correlate and observe the world’s coordinates.

And who, if not writers, should say not only to their incompetent leaders (an easy enough furrow to plough in some states, where everyone who can be bothered to is doing the same), but also to their society as a whole, whether for cowardly submission or for self-centred weakness – and also to the frivolous excesses of youth and young pirates brandishing knives?

They will say to us: what can literature do against the remorseless onslaught of open violence? Ah, but let us not forget that violence does not and cannot exist on its own, it is inextricably bound up with the lie. The link between them is fundamental and entirely natural and organic: violence has nothing to cover itself with except the lie, and the lie has no way of maintaining itself except through violence. Anyone who once proclaims violence his method is inexorably bound to choose the lie as his principle. At the time of its birth, violence operates openly and is even proud of itself. But no sooner has it affirmed and established itself than it feels the air around it growing thinner and cannot continue to exist without surrounding itself with a smokescreen of lies and hiding behind their honeyed sounds. Violence does not always and of necessity come right out and throttle you: more often than not it simply demands of its subjects that they subscribe to the lie or participate in it.

And the simple course of the simple brave man is not to participate in the lie and not to support lying actions. Even if that comes into the world and reigns in the world, let it not be through me. But writers and artists are capable of more: they can conquer the lie! For in the struggle with the lie, art has always conquered and always will conquer – visibly and irrefutably for all to see. The lie can withstand much in this world, but never art.

And no sooner is the lie dispersed than violence stands forth in all its repulsive nakedness – and feebly collapses.

That is why, my friends, I think we are able to help the world in its hour of need. We must not use our lack of arms as a pretext for saying no, nor give ourselves up to a life of ease. We must go into battle!

In the Russian language the most popular proverbs are about truth. They emphatically express the not inconsiderable and hard experience of the people and sometimes do so with astonishing force: One word of truth shall outweigh the whole world.

It is on this apparently fantastic violation of the law of conservation of masses of energy that I base my own work and my appeal to the writers of the whole world.