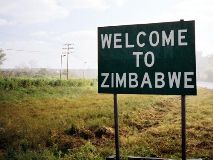 Despite the dangers, Zimbabweans are still managing to spread a democratic message through the media, writes
Farai Maguwu

Zimbabwe has some of the harshest media laws in Africa. Currently the country has only one state-run television station and one state-controlled radio broadcaster that broadcasts on four channels. Hundreds of journalists were driven out of employment by Draconian media laws that forced the closure of private newspapers and blocked the creation of private radio and television broadcasters. The defeat of ZANU PF in the 29 March general elections led to increased censorship of the press as a damage control measure by the Mugabe government. The government has been using the public media to disseminate liberation war rhetoric that aims at inciting and justifying violence against the opposition MDC and the critical civil society. Because of the active involvement of the state-controlled media in promoting violence, some of the senior reporters from both the print and electronic media have been included on the list of Zimbabwean officials under the EU ‘targeted sanctions’. Despite overwhelming evidence showing that more than 160 opposition and civic activists were murdered by ZANU PF militias and state security agents between April and July 2008, the state-controlled media conspired to either ignore the killings or, when under immense pressure to comment, blame the opposition for the violence that claimed its own supporters.

Zimbabwe has only three remaining weekly publications that survived the government onslaught against private newpapers. Another private newpaper, the Zimbabwean, which is printed in South Africa, had its delivery van burnt by suspected ZANU PF youths in May 2008. The driver and his assistant were beaten and left for dead. Several journalists reporting for foreign press have been arrested, assaulted and detained for several weeks on spurious allegations.

Against this hostile environment for the private media, Zimbabweans have resorted to setting up private radio stations abroad that broadcast into Zimbabwe. The three prominent ones are Studio 7 Voice of America (VOA), Shortwave Radio Africa and Voice of the People (VOP). Unlike the state-controlled media, they give both sides a chance to be heard. Apart from the private radio stations, Zimbabweans have also set up online newspapers such as Newzimbabwe.com, zimonline, and hararetribune.com, which give alternative views. However, not many Zimbabweans have unlimited access to the Internet. Due to the economic quagmire Zimbabwe finds itself in, the majority of people use the Internet for emails and job application purposes only. The Interception of Communications Bill (2007) gives the state the right to open private emails, thereby limiting the people’s freedom to express political views through the internet. There is deep suspicion among Zimbabweans due to the clandestine operations of President Mugabe’s secret agents, causing many to fear even reading an email with a political message. The private radio remains the safest and most reliable source of information. Another growing parctice is the use of text messages to convey political messages.

At least twice a week I give political anaysis on Studio 7 Voice of America and Voice of the People. I have been speaking on Studio 7 Voice of America since 2005. My commentries are aimed at inspiring Zimbabweans to express their political views despite the threats of violence that abound. Knowing that I criticise the government from within Zimbabwe has inspired a lot of people to come to me looking for journalists to give their political views or to report cases of political violence that might have taken place elsewhere. We have sometimes invited journalists from Studio 7 to cover our workshops in rural areas, and we give traditional leaders a chance to be heard. However, as the situation became tense after the 29 March elections, the Centre for Research and Development (CRD) conducted shadow reporting on the sidelines of our rural workshops. Information was gathered through interviews from workshop participants and, through the snowball method, other interviewees were traced to their homes. We then disseminated this information to other civic organisations through email alerts.

Living in a high density surbub and using public transport some of the time means I don’t have any form of special protection from the militias and government secret agents. In 2005 the war veterans tried to abduct me in the street but failed, and this year they threatened me with death at a government building in Mutare. The people I work with are also in constant danger as evidenced by suspected CIOs who stormed our offices in April 2008 and left threats.

I chose the human rights and democracy path very early in my life, having felt a strong disquiet concerning the culture of fear and terror that President Mugabe’s government had cultivated in Zimbabwe. A few weeks into my second year at university I was voted the Students Representative Council (SCR) president. I then joined other student activists under the banner of the Zimbabwe National Students Union (ZINASU), demanding a commitment to democracy and freedom. When I studied for a Masters in Peace and Governance I was convinced that unless we chose the path of good governance our country was destined for an imminent destruction. I then founded a trust dedicated to civic education in the spheres of human rights, peace and good governance. I chose not to seek work abroad because I strongly felt my skill and zeal are best used where the situation is precarious, and Zimbabwe is one such case at the moment. My work is very dangerous given that in Zimbabwe the state is the biggest perpetrator of human rights violations and speaking out against these abuses puts me at a high risk.