Earlier this month a Moscow court freed Ekaterina Samutsevich, one of three imprisoned women from Russian punk band Pussy Riot but upheld the two-year jail term handed down to her bandmates. Samutsevich, Maria (Masha) Alekhina and Nadezhda (Nadya) Tolokonnikova were convicted of hooliganism in August after staging a “punk prayer” in a Moscow cathedral to protest the Russian Orthodox Church leader’s support for the president Vladimir Putin ahead of the Russian presidential election. The band’s conviction came amid a wider crackdown on dissent, which has included tighter controls on media, moves towards internet censorship and the harassment and arrest of opposition activists and civil society.

Samutsevich — also known as Katya — believes everyone has social and political responsibility, and that artists have the power to make “people understand problems they couldn’t see before.” And exercising that responsibility is how Katya got in trouble.

In a week where her comrades were sent to harsh prison camps in remote Russian regions, Samutsevich gave this exclusive telephone interview to Elena Vlasenko, Index on Censorship’s Russia correspondent, and assured her Pussy Riot is here to stay.

INDEX:  You were given a suspended sentence on appeal after you alone switched lawyers. The judge’s decision hung on the fact you were ejected from the cathedral before being able to perform but your friends remain in prison. Are the rumours about a split in the group true?

Ekaterina Samutsevich: All the talk about divisions in Pussy Riot are the authorities’ attempt to spin the situation. We definitely didn’t expect my release on probation, [we] thought the sentence would not change. Anyway, this is a victory for all of us … one person out of three is released, or at least on a suspended sentence. Nadya and Masha hugged me and congratulated [me] on this.

INDEX: Why did you switch lawyers? Who disliked your previous  lawyer Violetta Volkova most — you or the judge?

ES: Prisoners sometimes change lawyers several times per trial, and that’s ok. I don’t really want to emphasise it, like some media do, that is why I prefer not to comment on the issue.

INDEX: How did you say goodbye to Nadya and Masha? Are you managing to stay in touch?

ES: We wished all the best to each other. We used to write each other letters almost every day before their departure to the penal colonies, but now it’s hard to communicate.

INDEX: You filed an appeal to European Court of Human Rights saying your prosecution and detention violated article 10 of the European convention — free expression — and article 3 — prohibition of torture. Why article 3?

ES: We consider ourselves innocent and the very fact of our detention illegal. The court obviously wanted us exhausted. We were woken up every day at 6am and taken to the court at about 9am, no matter what time the proceedings started. Sometimes we had to wait several hours in a room under convoy before we finally got to the courtroom. The same waiting happened after the proceedings. We spent several hours under convoy waiting for a car, and another hour — in front of the pretrial prison gate. We entered the cell at about 1am. The next day we had to get up at 6am; every day of the proceedings would be the same. Before the proceedings we had to come to the court every morning to familiarise ourselves with the case … We spent two and a half weeks on this schedule.

As a rule, if a case isn’t big — normally criminal cases run to tens of volumes, and ours was only seven — the court holds proceedings once a week. But not this time. From our perspective, the rush was deliberate so that we were too tired to understand what was going on during the proceedings. I was so exhausted once we had to call the ambulance. And the doctors had to give Masha an injection as her blood sugar level dropped dramatically and she was awfully dizzy.

It was torture for us.

INDEX: One could see how physical and rude the bailiffs were to you after the judge ruled. Why?

ES: They were extremely rude and very rough while escorting us to the car: they twisted our arms, for example, maybe so that we couldn’t wave to our supporters. This rudeness is typical towards any person in handcuffs in Russia.

INDEX: Other members of Pussy Riot who remain in hiding told Index on Censorship if they could turn back time they would still repeat the punk prayer. Would you?

ES: Nobody expected the arrests. Punk prayer is not a crime, besides, we successfully left the cathedral without being detained. Of course, we would repeat our prayer: we can’t stay silent … But we would definitely sing the song to the end, the guards didn’t let us that time. I personally would prefer to stay in the cathedral for all the song’s duration, not just 15 seconds.

INDEX: From your perspective what event changed Russia, making it once again the kind of country where controversial trials, like yours, are possible — Putin’s presidency, the Chechen war, the 1996 elections? What was the point of no return?

ES: I don’t think there was a point at all. There are many factors, and one of the most important one is the authorities’ policy towards culture and education. The prerequisites appeared long ago — there was no freedom of expression in the Soviet era — but the situation began worsening sharply when Putin came to power. 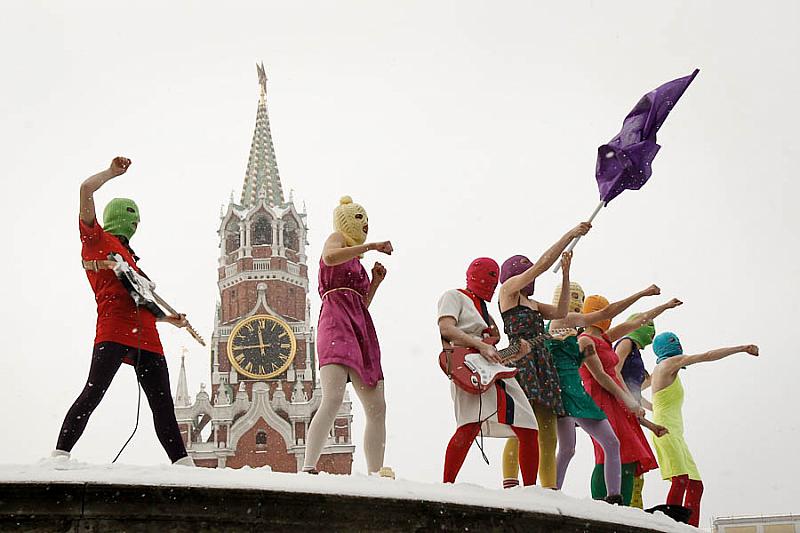 People don’t have opportunities to learn about modern art, culture and civil politics. They think politics is a number of high ranking people who sit in their offices. Citizens don’t see themselves as part of policy making, because they simply don’t know they have the right and means to become part of the process. The lack in education leads to the lack of civil protest culture. As a result they play by the rules dictated by authorities.

The only solution is education and self-education, which is becoming more possible because of the internet. The internet is indeed our rescue – as a source of education. The second most important thing is a will to unite, like the lesbian, gay, bisexual, and transgender  activists or ecologists recently did. It is important not to count on one leader who will save everyone. There won’t be one, and there shouldn’t be. Pussy Riot is against leaders, we stand for more complex structures of civil communities.

INDEX: Western artists and intellectuals supported you more vocally than those in your own country. Has Pussy Riot suffered for the growing political indifference of Russia’s intellectuals and the artistic community?

ES: Pussy Riot does pay for this. But not only for intellectuals and people of art, but for the whole country’s political indifference. But we should take political pressure and censorship into account. We don’t have art communities which are 100 per cent independent of the authorities.

INDEX: Pussy Riot stands for political art. Does that mean you believe artists have a responsibility to speak out?

ES: Yes, of course, but it is not just artists that have social and political responsibility. Every person is responsible for seeing what surrounds them and for expressing concerns over it. Citizens are provided with power by the constitution and they have a right to influence the situation in a country. That’s what they should do, especially artists. They have the power and knowledge to communicate serious issues in clear, efficient ways which make other people understand problems they couldn’t see before.

INDEX: When will you achieve your goals and stop performing? What is the perfect future for Russia – one where Pussy Riot is no longer needed?

ES: This will happen years from now; now the government is only intensifying repressions. The current power  should change the model of its behaviour. People should form a strong and active civil society, which will influence and dominate the authorities — the opposite of what we have now… So we will continue fighting.