Pavel Sviardlou, a Belarusian journalist with European Radio for Belarus, was denied accreditation prolongation by the country’s Foreign Ministry at the end of January 2013. The ministry gave the reporter’s previous administrative arrest as a reason for dismissing his accreditation. 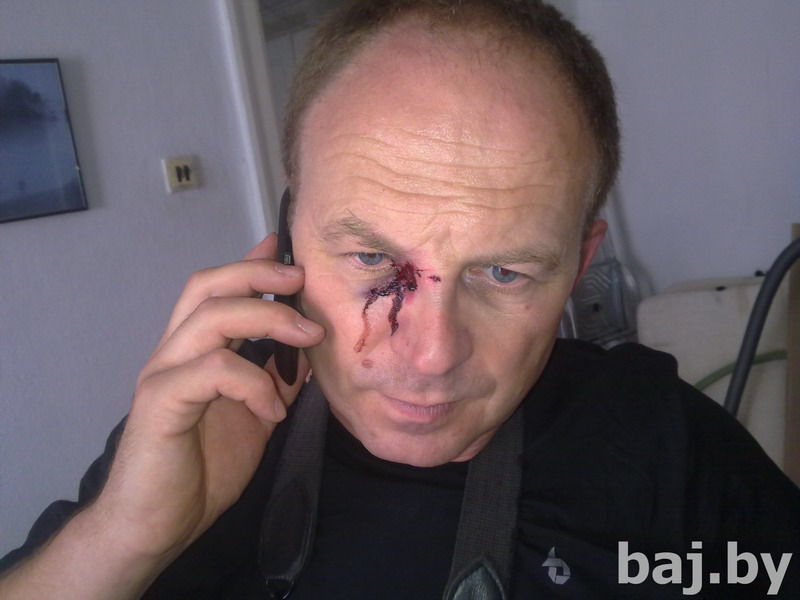 Belarusian photographer Sergei Grits, after being attacked by plain-clothes police officers while covering a protest

Sviardlou was detained and served a 15 day arrest in June 2012 — when he was grabbed from the street and forced into a minibus by police officers while he was on his way to the editorial office from home. The journalist, also a teacher of cultural studies, was accused of swearing in a public place; two police officers’ testimonies, though contradictory, were used as evidence, and the sentence was pronounced before his lawyer was even able to get to the court. Six months later this piece of Belarusian judiciary practice was used to refuse the journalist’s press accreditation.

Sviardlou’s story highlights the challenges independent reporters face in Belarus. Accreditation is just one side of it; physical violence and the absence of independent courts are even more serious problems.

The difficulties intensify during major political campaigns. Dozens of journalists were beaten by the police and detained on 19 December 2010 during the brutal dispersal of protest against alleged presidential election fraud.

In September 2012 seven journalists who covered a peaceful street performance of opposition in Minsk were seized by plain-clothed police officers; Sergei Grits, an Associated Press photographer, suffered a serious facial injury during the attack. When Grits made a complaint, the police replied that they had had nothing to do with the attack and had been unable to “identify the attackers” — despite numerous photos and videos of the incident being available.

“In the end, it does not matter whether you work for a Belarusian or foreign media outlet,” Vital Zybliuk, the editor of European Radio for Belarus in Minsk, says. “We all have Belarusian passports. The only difference is the Ministry of Information being in charge of regulation of the activities of the former, and the Foreign Ministry ‘taking care’ of the latter. But none of the ministries has ever really stood up for a journalist who suffered from violence from the police or persecution by the KGB.”

Use and abuse of media law
Belarus’s media law came into force in February 2009. The Belarusian Association of Journalists, a leading national press freedom organisation, has been campaigning to change the most repressive provisions of the law: restrictions in registration of media outlets and a narrow definition of “a journalist of a mass medium” (it does not allow legal grounds for freelance journalism).

According to BAJ, the present regulations turn press credentials into permission to seek and impart information, with these rights guaranteed by the Constitution and the country’s international commitments. In fact, even the present laws written by the authorities are often ignored, as law enforcement interferes with the activities of journalists.

“Ten years ago we taught our members how to avoid law suits for libel and defamation while writing articles. Now at our seminars we explain to journalists how to behave during detention, interrogation or a search,” Andrei Bastunets, BAJ Vice Chairman and a major Belarusian media lawyer, admits.

Yet, libel is still an issue. “Discredit of the country”, and insulting a state official or, especially, the president are crimes in Belarus. In 2002, several journalists served terms of compulsory labour for openly criticising the country’s authoritarian ruler, Alexander Lukashenko. Andrzej Poczobut, a correspondent for the Polish national daily Gazeta Wyborcza in Belarus, received a suspended imprisonment sentence for the same “crime” in 2011 — and still faces another round of similar charges at the moment. If found guilty of insulting the president again, the journalist could go to jail for up to five years.

Economic pressure
Not all repression of media in Belarus is so straightforward; some is less brutal and vivid, but no less dangerous for media freedom.

Independent media face economic discrimination. Non-state printed news media have to pay more for paper than state-owned ones. They also face problems with printing houses — there are few private ones, and state-owned printing presses collude with censorship. There have been instances when state printing houses demanded an independent newspaper cut a critical article, or refused to publish the paper altogether.

Another way of putting pressure on independent media was introduced before the presidential elections of 2006, when state systems of press distribution terminated their contracts with dozens of non-state newspapers. Not all of them had their own distribution networks; some of them had to close down or move completely online. Eleven independent publications are still kept out of the state-controlled system of retail press distribution and subscription catalogues. This means they are limited in the ways they can earn money and sustain their news operations.

About 75 per cent of the Belarusian economy is state-owned; the remaining 25 per cent can be — and actually is — controlled by the state. It is done through regulations and laws, but also by “insistent recommendations” from the authorities. For instance, in 2010 they “recommended” both state-owned enterprises and commercial banks avoid advertising in independent newspapers. That move led to further cuts of non-state media budgets.

“They could suppress us all completely, but prefer to keep us alive, but struggling,” Uladzimir Yanukevich, the CEO of Intex Press independent publishing company from Baranavichy, says. “They have the whole arsenal of restrictions in store for us: they limit access to information for our journalists, they charge us more for paper and printing, they limit our distribution and advertising. But the authorities are not really interested in strangling free press completely. Their policy is to swing like a pendulum between Russia and Europe; they want to show to the latter that there are independent media in the country.”

But it is not the good will of the authorities that really keeps free press in Belarus alive.

“Independent journalists and media managers work extra hours, study, develop, they learn how to master new technologies, how to do good journalism, and try to earn from doing so, while being able to avoid all traps,” Yanukevich says.

Most independent newspapers that have survived in Belarus were established in 1990s — but now it is next to impossible to register a new media outlet covering political news and social issues. It is not only about finding a team of dedicated people and initial capital, but also meeting all the formal restrictions the law imposes. For instance, the editor-in-chief of a newspaper must at least five years of senior editorial experience in order to be registered by the Ministry of Information, a requirement not easy to meet in the country where the media market is so restricted.

There are also numerous ways the authorities of Belarus curtail free voices online. To learn more on digital challenges to freedom of expression in Belarus, read Belarus: Pulling the Plug policy paper by Index