In the run up to the presidential elections in October 2013, there have been increased attacks on free expression in Azerbaijan. And social media has become a new target for the country’s authorities, says Idrak Abbasov

Azerbaijan’s next presidential elections are scheduled for October this year and the country’s authorities have already begun silencing dissent, extending the already alarming restrictions on freedom of expression and other civil and political freedoms.

On 12 March, Avaz Zeynalli, editor of independent newspaper Hural, was sentenced to nine years in prison for alleged bribery. The journalist pleaded not guilty, and has claimed that the charges brought against him were connected to his work. According to the Baku-based Institute for Reporters’ Freedom and Safety, six more journalists critical of the ruling regime have faced false charges — ranging from possession of drugs to high treason.

Impunity is still a problem: those responsible for the murders of journalists Elmar Huseynov (2005) and Rafiq Tagi (2011) have yet to be found or tried. Well-known Azerbaijani journalist Chingiz Sultansoy told Index:

Impunity has affected the work of all journalists in Azerbaijan for years. The recent cases show that people who attack reporters feel permissiveness and have no fear of punishment for violence. It was the case with brutal attacks on Hadiza Ismail, one of the best investigative journalists in Azerbaijan, or Rashad Zustamov, a reporter for Zerkalo newspaper, who conducted his investigations in the provinces. 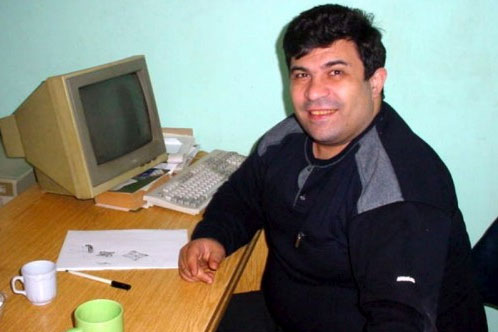 The independent press has faced economic discrimination, as authorities regularly pressure advertisers not to sell ads in these papers; critical newspapers are kept away from press distribution networks, which are controlled by state officials.

“The further pressure aims to completely stifle the free press and restrict media freedom in the country. The regime has not been able to completely destroy the independent media, only because of several courageous media outlets and reporters who continue their work selflessly,” Ganimat Zahid, the editor-in-chief of Azadliq (“Freedom”) newspaper, says.

“Ministers continue filing suits against the press and claim huge compensations and fines in libel cases in order to bankrupt newspapers. As the authorities are aware their real electoral support is low, they try to tighten the screws and restrict people’s rights and freedoms, especially freedom of expression,” Natig Dzhafarli, an executive secretary of REAL movement, says.

Television remains an important source of information for the population of the country. Most of the nine national TV channels are either directly owned by the state or controlled by the authorities. Audiences are inundated with state propaganda, even through channels that offer no direct coverage of current events or political news. For instance, commentators on a state sports channel often forget to comment on a sports event they broadcast — and instead praise President Ilham Aliyev for “the great attention” he pays to development of sports in the country.

“There is no independent television in Azerbaijan. Even the Public TV that is supposed to be a public service broadcaster serves the government. The only alternative TV is ‘Azerbaijani Time’, broadcast from Turkey,” says Shahvalad Chobanoglu, a journalist and critic of the government.

While the authorities keep almost total control over the traditional media, social networks have become an important platform for free expression. Facebook is one of the most popular sites used. According to blogger Ali Novruzov, social media will play a significant role during the election campaign, as IT remains the only free channels of information in Azerbaijan — and it certainly keeps the regime wary.

Several activists have been arrested for their protest activities on social networks. In public statements, high-ranking officials aggressively attack social media, calling it a “harmful phenomenon”. Fazail Agamaly, an Azerbaijani MP, publicly called for access to social networking websites in Azerbaijan to be blocked during a speech in Milli Majlis, the country’s parliament.

According to Turgut Gambar from the Nida Civic Movement, there has been a “wave of unprecedented attacks” against recent pro-democracy protests organised by Azerbaijani youth. On 3 April, Nida reported that seven of its members are currently imprisoned and are being held in prison for three months in pre-trial custody. They include activists Shahin Novruzlu, Mammad Azizov and Bakhtiyar Guliyev, arrested on 7 March for alleged possession of drugs and molotov cocktails; NIDA board members Mammad Azizov, Rashad Hasanov Rashadat Akhundov and Uzeyir Mammadli, arrested on 7 March, 14 March and 30 March; and blogger and activist Zaur Gurbanli, arrested on 1 April.

The war declared by the regime on social media became more serious after street protests — organised by young people through Facebook — on 10 March . 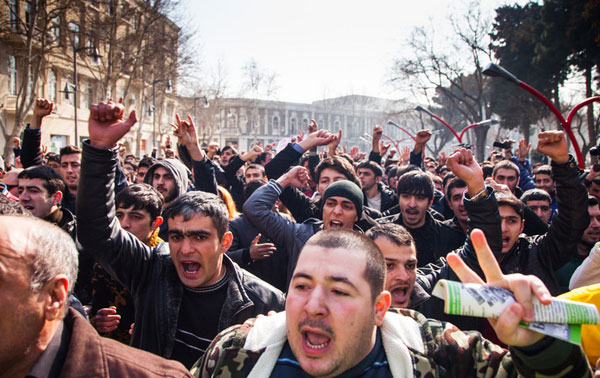 Hundreds of protesters gathered in Azerbaijan’s capital on 10 March

On the same day, Eynulla Fatullayev, the editor of haqqın.az website and a former political prisoner, published an investigation accusing the head of a local branch of National Democratic Institute (NDI), Alex Grigorievs, of sponsoring $2 million to the “Facebook revolution”, as the event has already been dubbed. Grigorievs has denied this, and Fatullayev’s colleagues have accused him of “turning pro-government”.

Azerbaijani authorities took the report seriously: not only was this reflected in the number of activists detained, but also in its decision to support those using social networks to show their allegiance to the government. On 16 March, president Ilham Aliyev allocated 5 million Azerbaijani manats (about £4.2 million) to fund activities of pro-governmental youth organisations in social networks.

But the blogger Ali Novruzov believes the authorities will not be able to coerce opinion on social media:

The government does not control the internet and is not really able to; this is why they are afraid of new technologies and are paranoid about ‘Facebook revolutions’ and alleged millions spent on mobilising the youth in social networks. The regime understands that with one million Azerbaijanis being on Facebook and able to impart and receive uncensored information, it will be difficult to implement their election scenario.