On 6 May 2012, the day before Putin’s inauguration, tens of thousands marched towards Moscow’s Bolotnaya Square, protesting against his return to power, fuelled by allegations of election fraud. 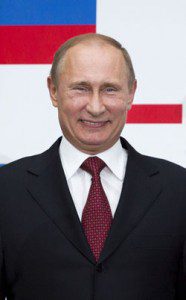 The rally was to be the culmination of the historic peaceful protests for fair elections in late 2011. The plan had been to end the march with a rally in the sqaure, where the throng of protesters were funneled through metal detectors. A splinter group launched smoke bombs at the police, which erupted into violent clashes with security forces. Hundreds were arrested — including opposition leaders Alexei Navalny and Sergei Udaltsov — and many faced criminal charges for participating in “mass riots.”

Days later, when 200 protesters protested the Bolotnaya Square arrests, organisers of the encampment were arrested. Criminal charges were brought against almost 30 protesters, most of whom, according to rights activists, were either mistakenly prosecuted or should have faced lesser administrative charges.

In April 2013, a public inquiry led by members of Russia’s opposition and human rights activists refuted the official narrative around the 6 May rally. The inquiry found that the response of protesters was an act of “self-defence”, provoked by “police officers and masked men”. Despite the findings, there is an air of pessimism about the political climate.

The deterioration of the free expression environment in Russia has accelerated since Putin’s inauguration. Authorities prosecuted Pussy Riot and instituted of a number of repressive laws against non governmental organisations, rally organisers, and re-criminalised defamation. There is also an ever-growing blacklist of websites. The second reading of the so-called “homosexual propaganda” law is planned. Yet, none of these recent actions have been met with a substantial response from Russia’s opposition.

Student Blog Competition
Think you have what it takes to be published by Index on Censorship? Here’s your chance to find out. More >>>

Last October, groups opposed to the Kremlin created the “Opposition coordinating council” — an online, elected pseudo-parliament meant to legitimise opposition leaders. Throughout its young existence it has received criticism — not from pro-Kremlin media or activists, but from people who voted for them or participated in the elections — for using expensive facilities for their monthly meetings. In fact, most elected opposition leaders don’t attend these meetings, which means that the council doesn’t have the quorum to make decisions. The council’s decisions are also minor administrative details about bylaws, and have less to do with fighting to change the current system.

The council, created to form a united opposition strategy, still hasn’t decided whether it should criticise Putin and demand his resignation, or to call on him to implement radical reforms.

Even though it has failed to give a strong response to the Kremlin’s attempts to silence dissidents, the opposition has faced criminal prosecutions of its leaders. Sergei Udaltsov is currently under house arrest on charges of organising “mass riots” and political activist Alexei Navalny is facing charges of fraud. The result has been to blunt the rising political power of Udaltsov and other members of the opposition’s leadership.

When this year’s 6 May anniversary rally ended, demonstrators were made to pass long lines of soldiers blocking their way to the Red Square and many other places, forcing the protest’s traffic towards Moscow’s metro stations. One could hardly call the picture of protesters winding through rows of soldiers, police and military cars, one of freedom. Without much to expect from either the government or the opposition a general feeling of entrapment hung over Bolotnaya Square’s anniversary protests.

One response to “Putin’s war on dissent in Russia”