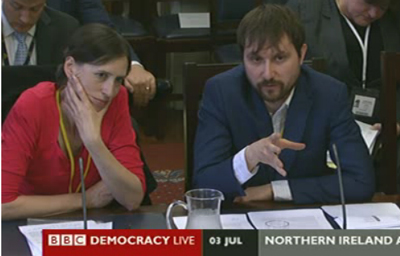 Mike Harris, Head of Advocacy at Index on Censorship, and Jo Glanville give evidence before the finance committee of the Northern Ireland Assembly on Wednesday.

MLAs will today be told that reform of Northern Ireland’s outdated law is needed or else the province will lose out on investment, writes Mike Harris in the Belfast Telegraph

In 2008, the United Nations Human Rights Committee condemned the libel law of England, Wales and Northern Ireland for having a chilling effect on free speech across the world.

Not only did important elements of the law pre-date the invention of the light bulb, let alone the internet, but corporations and oligarchs could bully their critics with near-impunity, silencing freedom of expression both here but also abroad.

The courts heard cases with no connection at all to this jurisdiction. One Ukrainian oligarch sued a local Ukrainian paper and a disgraced Saudi businessman, Sheikh Khalid bin Mahfouz, sued a US academic for a book not even published here.

To protect free speech, US President Barack Obama signed into law the US Speech Act to protect US citizens from the effect of English, Welsh and Northern Irish libel law, an act described as a “national embarrassment” by MPs.

Now Northern Ireland is alone with its embarrassing libel law. The law of England and Wales has been substantially reformed after the Libel Reform Campaign won support from 60,000 members of the public and over 100 charities and campaigning groups and in response the Government passed the Defamation Act.

Meanwhile in the Republic of Ireland, the Defamation Act of 2009 made modest changes to update the law to reflect the internet age and improve the defences available to those sued.

It is extremely unfortunate that Sammy Wilson, the Minister of Finance and Personnel, personally vetoed adoption of the Defamation Bill without scrutiny by either the Assembly or the Executive.

The worry is that “libel tourists” such as corrupt businessmen, powerful vested interests and global corporations may begin to use the High Court in Belfast to silence their critics using Northern Ireland’s unreformed law.

When we started our campaign, we asked people to tell us what had been censored using the libel laws. The results were startling.

Half of GPs surveyed said libel laws were stifling debate about the safety of drug treatments. Which? told us it went through lengthy legal proceedings by a manufacturer after they lab tested child safety seats.

Mumsnet faced legal action for humorous posts on its forum. Those who spoke out on the dumping of toxic waste in Africa and the funding of terrorism were taken to court.

Chillingly, cardiologist Dr Pete Wilmshurst told us how he was being sued by a US corporation for pointing out possible problems with heart devices.

In the four years he fought his case, patients continued to have these devices implanted in their hearts. Some then needed extensive surgery to have them removed because of the fault. If his concerns hadn’t been silenced by his four-year libel case, doctors may not have recommended this treatment.

Dr Wilmshurst will be joining me, English PEN and Sense About Science to give testimony to the Finance and Personnel Committee of the Northern Ireland Assembly today after the Chair Daithi McKay personally intervened to ensure Northern Ireland has a debate about these laws.

Mike Nesbitt MLA is also working with lawyers to prepare a Defamation Bill to bring to the Assembly later this year.

While Sammy Wilson thinks there is no need for reform, other politicians beg to differ.

If Northern Ireland gets this right, it will have a law fit for the internet age that protects ordinary people and GPs, scientists and academics speaking out in the public interest.

If it fails to reform the law, it’s hard to see how it will attract internet companies with a publication rule from 1849; how it will attract academics with no public interest defence for their work, or ensure books don’t get pulped (as they have done) with little protection for comment or opinion.

England and Wales have enacted wholesale libel reform for the first time in 170 years, Northern Ireland cannot afford to miss this opportunity.

This article originally appeared at the Belfast Telegraph.