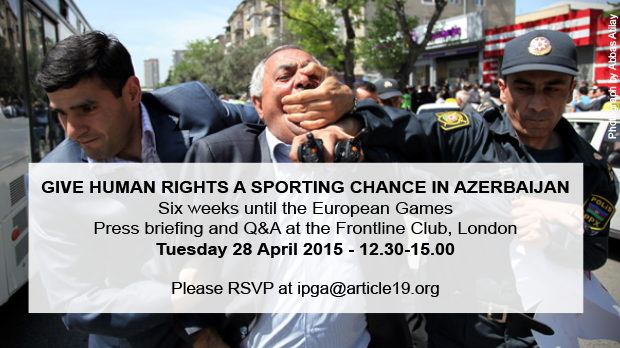 Should human rights activists call for boycotts of sports events hosted by repressive regimes? What responsibility do sports organisations have? How can journalists effectively cover the full scope of human rights, social and political issues surrounding the Baku European Games?

In June 2015, Azerbaijan’s capital Baku will host the first European Games under the umbrella of the European Olympic Committees. Controversy already surrounds this new sporting venture, following reports earlier this year that Azerbaijan will foot the bill for all 50 national Olympic teams to attend.

The country’s internal political situation gives further cause for concern. Over the last twelve months, a wave of arrests of key critics — including human rights activists, election monitors, lawyers and investigative journalists — has almost entirely silenced Azerbaijani civil society, leaving activists and journalists in exile to highlight the regime’s on-going attacks on freedom of expression. Several large NGOs have been closed and legislative amendments make it almost impossible for critical groups to get foreign funding. The government controls all broadcast media, and in December, it forcefully closed the Baku branch of Radio Free Europe/Radio Liberty, a US-funded media organisation.

Meanwhile, Azerbaijan continues an expensive PR campaign to promote its image abroad – with considerable success. International criticism has been largely muted; with the EU and the US looking at ways to foster closer and strategic ties with Azerbaijan.

During this interactive session, our panellists will explore the relationship between sport and human rights, examining the argument that Azerbaijan is using such high profile events to whitewash its image amidst criticism from domestic human rights activists as well as international bodies regarding its human rights records.

The panel, chaired by ARTICLE 19, will bring together Azerbaijani human rights activists, political commentators and international human rights experts. The panellists will include Emin Milli, a former political prisoner in Azerbaijan, now director of Meydan TV, Rebecca Vincent, coordinator of the Sport for Rights Campaign, Giorgi Gogia, Human Rights Watch’s senior researcher on Azerbaijan who was recently denied entry into the country, and others to be confirmed.

The event format will be as follows:
12.30 – 13.00: Arrival, lunch and informal discussion
13.00 – 14.00: Interactive session, featuring Azerbaijani journalists and activists as well as human rights experts.
14.00 – 15.00: Opportunity for one-on-one interviews/discussion with panel members

The Panellists:
Emin Milli is an activist, blogger and co-founder of Meydan TV, an alternative online Azerbaijani news service, operating from Berlin. In August 2009, Milli and Adnan Hajizada, (known as the “donkey bloggers”), were found guilty of hooliganism and imprisoned for more than a year after posting an online video satirising the Azerbaijani government.
@eminmilli

Rebecca Vincent is a human rights activist and former U.S. diplomat who has been working on Azerbaijan for nine years. In December 2012, her Azerbaijani residence permit was revoked in connection with her human rights work in the country, and she has been unable to return to Azerbaijan ever since. She is currently the coordinator of the Sport for Rights campaign.
@rebecca_vincent

Giorgi Gogia is a senior researcher at Human Rights Watch with over a decade of experience working on Azerbaijan. Giorgi was recently banned from travelling to Azerbaijan, preventing him from monitoring the trials of human rights defenders behind bars on politically-motivated charges. He was deported without any explanation after spending 31 hours in Baku’s Heydar Aliyev airport.
@Giorgi_Gogia

This event is hosted by Article 19, Human Rights Watch and Index on Censorship on behalf of the International Partnership Group for Azerbaijan (IPGA). The IPGA is a coalition of 22 international NGOs, coordinated by ARTICLE 19, working to promote and protect freedom of expression in Azerbaijan. The group arose from a broader International Partnership framework established by International Media Support (IMS) and Open Society Foundations (OSF) in 2010. Since then, the IPGA has engaged in joint advocacy around specific events, such as the Eurovision Song Contest and the Internet Governance Forum both of which were held in the Azerbaijani capital Baku in 2012; and  has regularly raised issues relating to human rights in Azerbaijan at international and regional institutions, notably the Council of Europe – with Azerbaijan chairing the body’s Committee of Ministers in 2014. – Read more about the IPGA