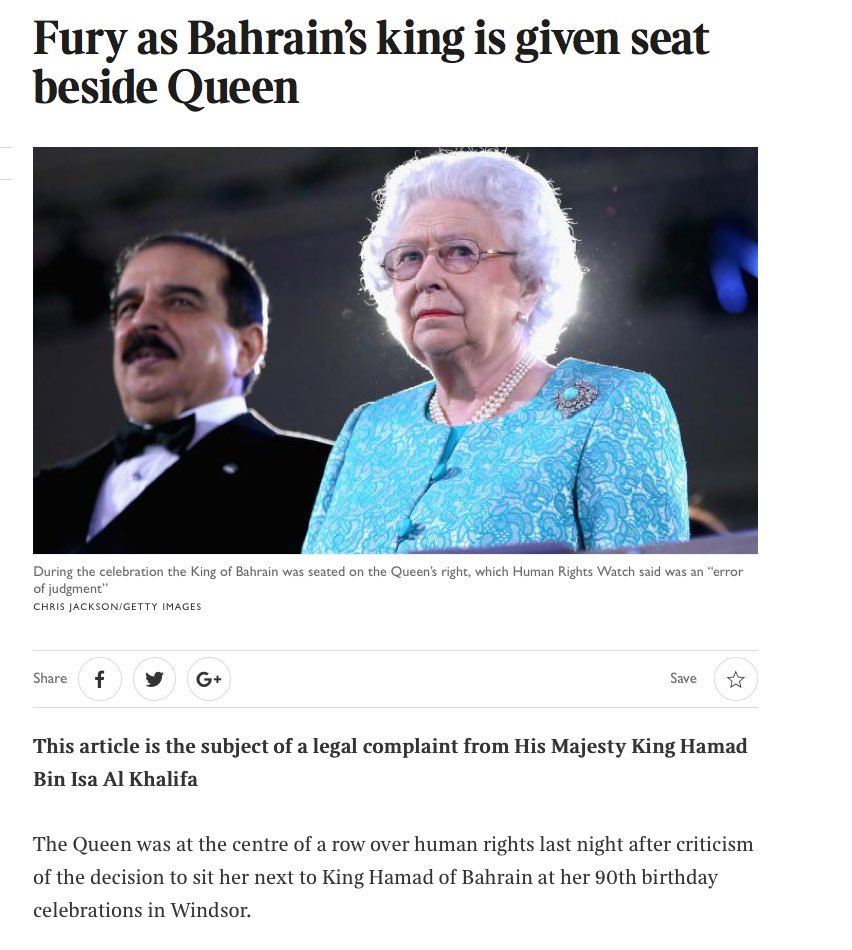 The Royal Windsor Horse Show should sever ties with the Kingdom of Bahrain, say five rights groups today in letters to Buckingham Palace, event organisers HPower Group and principal partner Land Rover. King Hamad, who local Bahraini media report to have departed from Bahrain, is expected to arrive in the UK today.

The human rights groups state: “The Royal Windsor Horse Show and the monarchy risk reputational damage by maintaining close relations with the Kingdom of Bahrain and its head of state, and the continued association only serves to undermine the work of human rights organisations such as ours who are seeking a peaceful and reformative cessation of human rights abuses in Bahrain.”

The Royal Windsor Horse Show, which hosted a live-broadcast celebration for the Queen’s 90th birthday last year, has regularly hosted the King of Bahrain and his son Prince Nasser for the past several years. The King was spotted in the royal box, sat next to the Queen, during her birthday celebrations, and Bahrain sponsors at least four events at the annual horse show, including an endurance race and the Kingdom of Bahrain Stakes for the King’s Cup.

King Hamad’s high profile presence at the Queen’s birthday sparked controversy. The Times reported “fury” over the King’s seat, and was subjected to a legal complaint based on its reporting. The Independent and Daily Mail also reported on the King’s attendance. Buckingham Palace told the Independent that the King was there “at their behest”, while horse show organisers HPower said “he was there because he supports the horse show.”

The Horse Show has also sparked controversy for the attendance of King Hamad’s son, Prince Nasser, with one outlet last year reporting“Bahraini prince accused of torture expected to attend Royal Windsor Horse Show.” The prince, whose diplomatic immunity to the United Kingdom was quashed in 2014 over torture allegations, is a regular attendee and participant in the races.

The letter, signed by NGOs including the Bahrain Institute for Rights and Democracy, Reprieve and Index on Censorship, calls for the horse show to sever its ties with Bahrain until stronger ethical commitments are in place. The campaigners point to the deteriorating human rights situation in Bahrain, where the King signed death warrants for the execution of torture victims in January, and where civilians are currently being tried by military courts following fresh constitutional amendments. There are currently thirteen individuals on death row in Bahrain, six of them sentenced in March 2017. Two men, Mohammad Ramadan and Husain Moosa, allege torture and unfair trial, and have exhausted all legal appeals. They risk imminent execution.

Commenting, Director of Reprieve Maya Foa said: “Make no mistake – visits like this gift the Bahraini government a royal cloak of acceptability, while the Kingdom mercilessly executes political prisoners and uses torture to extract ‘confessions’. Theresa May wants stronger UK-Gulf relations, but we must not help the Bahrainis to whitewash their appalling abuses. Instead of drafting in the Queen to cosy up to King Hamad, the UK must urgently protest Bahrain’s use of torture and executions to silence opponents.”

To Land Rover, whose partnership with the horse show will soon be up for renewal, the rights groups ask that they do “not renew its partnership with the Royal Windsor Horse Show unless human rights commitments are adopted, including the exclusion of states engaged in human rights abuses from sponsoring the event and the prohibition of athletes with allegations of torture from participating in the event, and the severing of current ties with the Kingdom of Bahrain.”

Sayed Alwadaei, who protested King Hamad’s attendance of the horse show in 2013, was stripped of his citizenship two years later. Since March 2017, his mother-in-law and brother-in-law have been arrested, tortured and unfairly tried. Their prosecution appears to be solely to punish Sayed Alwadaei for his protests and human rights campaigning. Human Rights Watch described it as a “cowardly attempt to break the resolve of an activist by attacking his family.”

In 2015, Sayed penned an open letter to the Queen asking that she does not meet with Bahrain’s King, writing, “I strongly believe that my citizenship was stripped on account of my legitimate and peaceful protest at the horse show two years ago.” But the close relationship between the monarchies continued: during the 2016 Royal Windsor Horse Show, King Hamad was seated by the Queen’s side during her 90th birthday celebrations at the event.

Bahrain directly sponsors four events in the event schedule. Friday 12 May sees the Royal Windsor Endurance supported by the Kingdom of Bahrain, the Manama Two Phase jumping competition and the Bahrain Pearl Stakes race. Prince Nasser and his brother Prince Khalid have both participated in the Endurance race in previous years. On Saturday, the Kingdom of Bahrain Stakes for the King’s Cup will be held. The winner of the race is awarded the cup jointly by King Hamad and Queen Elizabeth.

Royal Windsor Endurance (CEI2*) supported by The Kingdom of Bahrain
Friday 12 May, 07.00