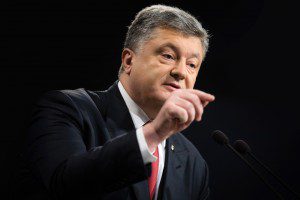 16 April 2019 – “The Verkhovna Rada adopted a resolution on the risks and threats to national security that come from two TV channels. Before addressing this issue, I commissioned a law enforcement agency that is responsible for national security in Ukraine, the SBU, to urgently check the information of the Verkhovna Rada,” president Petro Poroshenko said regarding the 112-Ukraine TV channel, answering a question regarding his plans to consider a petition in defense of the TV channels 112-Ukraine and NewsOne, which got over 25 thousand signatures.

Poroshenko said that as soon as the check is completed, the TV channels will be provided with the results, and will be able to provide comments that will be taken into consideration. 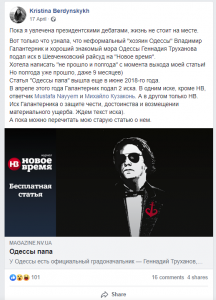 Novoye Vremya reports that there is another complaint filed against it

An informal “master of Odessa” Volodymyr Halanternik and a good acquaintance of the mayor of Odessa Gennady Trukhanov filed a complaint against Novoye Vremia weekly, she wrote. The journalist added that her article on Volodymyr Galanternik was published in June 2018. In her article Berdynskyh reported that Halanternik had a significant impact on politics and business in Odessa.

Journalist beaten up by local politician in Odessa

16 April 2019 — Bogdan Osinskiy, Gromadske Slidstvo outlet correspondent and editor for Megafon website, was beaten up near a temple by Odessa regional council deputy Roman Senik and his mother. The journalist fell to the ground in the crowd, and Senik hit him in the face with his feet. The police intervened, but Senik’s mother attacked the journalist in the presence of the officers, hitting him multiple times, and Senik pushed a phone out of the journalist’s hands and smashed it.

4 April, 2019 — Prosecutors have accused Kirill Vyshinsky, the head of Russia’s state-run RIA Novosti’s office in Ukraine, of publishing “anti-Ukrainian” articles and materials at the beginning of his treason trial in the Kyiv court. The Podil District Court began the trial on 4 April, almost a year after the 52-year-old was detained by the Ukrainian Security Service (SBU) amid accusations that RIA Novosti Ukraine was participating in a “hybrid information war” waged by Russia against Ukraine. After hearing the prosecutors’ indictment, the court adjourned until April 15th. SBU officials have said Vyshinsky, who at the moment of his arrest had dual Russian-Ukrainian citizenship, received financial support from Russia via other media companies registered in Ukraine in order to disguise links between RIA Novosti Ukraine and Russian state media giant Rossia Segodnya. They also said he was receiving some 53,000 euros (about $60,000) a month from Russian sources for his work, and that the money was sent to him through Serbia. According to the SBU, Vyshinsky was preparing reports at Moscow’s request that sought to justify the seizure of Ukraine’s Crimean Peninsula by Russia in 2014. Vyshinsky faces up to 15 years in prison if found guilty of the charges against him.

Update: 15 April 2019 – The prosecutor’s office accused Vyshinsky on the basis of publication of 72 “anti-Ukrainian” articles, Radio Liberty reported. This was announced by the prosecutors when they announced the indictment in Podilsky district court of Kyiv. Prosecutors stated that these articles were posted by Vyshinsky between 2014 and 2018. According to the prosecutors, the materials contained “false, biased information about Ukraine, the Ukrainian authorities and the army and refuted the Russian aggression against Ukraine.” The prosecution also believes that these materials “justify the possible separation of certain regions of Donetsk and Luhansk regions from Ukraine”.

Update: 7 May 2019 — Podilsky District Court of Kyiv extended arrest to Vyshinsky until 22 July 2019, Radio Liberty reported. The prosecutor demanded that the court leave Vyshinsky arrested for another two months. He substantiated this with the fact that the defendant has Russian citizenship and can escape to Russia. The defense spoke against the extension of the arrest and requested that Vyshinsky be released under house arrest.

2 April 2019 —  Zhytomyr.Life online outlet crew was assaulted by local transport company employee in Zhytomyr. The man attacked cameraman Vasyl Homyuk and twice tried to knock the camera out of his hands.