MEDIA FREEDOM
Azerbaijan: Press freedom violations May 2019
31 May 2019
BY INDEX ON CENSORSHIP 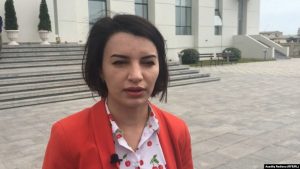 27 May 2019 – Journalist Sevinc Vagifqizi was taken to court, in connection with her reportage about a school teacher who was involved in carousel voting on the day of presidential election in Azerbaijan, repored, Azadliq Radio, Azerbaijan Service for Radio Free Europe.

Elmira Alandarova who is also the deputy principal, claims Vagifgizi’s coverage of her as someone who has manipulated the voting day and the results was a stain for her honor and dignity. Alandarova claims she was not involved in carousel voting, even though Vagifgizi’s reporting clearly shows how Alandarova directed the carousel voting at the polling station.

Vagifgizi refutes the accusations and says they are baseless considering the same woman tried taking Vagifgizi to court right after the election but the case was closed because there was lack of evidence.

The trial will continue on June 10.

Although at first, it was reported that the reason for the journalist’s detention was a blog post he wrote in response to the news of a recent resignation of Chief of Staff of the Armed Forces of Azerbaijan the court later said, the real cause for his detention was not paying aliments.

Yenicag claims Mammad was subject to a series of attacks over his story on the retired chief of staff and that he had no intention of running away or not paying the aliments. The court in Agdam however, ruled instead to sentence the journalist to the administrative detention.

Azerbaijani NGO Human Rights Club also confirmed that the detention is likely connected to the story about the general.

23 May 2019 – Journalist Ayrac Ahmadova was taken to the police reported independent Meydan TV.

Ahmadova also said, two other reporters Fargana Novruzova and Turkan Bashiri were stopped forcefuly by the police. One of the women reporters, shared how police ripped her jacket.

Ahmadova also said the police warned her, that from now on, no reporter could film without a permission outside the premises of the Presidential Allaparatus.

Police intervene in a protest organized by newspaper staff

23 May 2019 – A group of reporters from Futbol+ sports newspaper were prevented by the police from protesting outside the Presidential Administration reported independent Meydan TV.

Futbol+ was established in 1997. Its founder is Vugar Mammadov and editor in chief Mahir Rustamli. The newspaper employs around 30 journalists.

The editor in chief Mahir Rustamli promised to set up a meeting with the presidential apparatus to find further solution.

The group held a similar protest in April.

Journalist’s accreditation cancelled ahead of the Europa League final

20 May 2019 – Turan News Agency reporter Aziz Karimov lost his accreditation to cover the upcoming UEFA Europa League Final to be held in Baku on May 28, reported Meydan TV.

Although at first Karimov received accreditation from UEFA, three days later, UEFA informed the journalist his accreditation was cancelled.

When Karimov inquired with the UEFA for the reasons of this decision, the photojournalist was told that it was the local authorities who refused the accreditation to Karimov not UEFA.

Previously, the news agency Karimov represents – TURAN was also not allowed to cover the Formula 1 race that took place just a month ago in Baku.

25 May 2019 – UEFA confirmed the accreditation of Karimov and explained the refusal, as a mistake.

Azerbaijani journalist based in Russia subject to deportation

18 May 2019 – Fuad Abbasov, an Azerbaijani journalist based in Russia,  is being deported from Moscow reported Berlin based Meydan TV.

It has been reported that several Azerbaijani individuals based in Moscow have complained to Russian authorities asking them to deport Abbasov.

Abbasov was based in Moscow.

The local court in Moscow ruled in favor and currently the deportation papers are being processed.

30 May 2019 – Abbasov will return to Azerbaijan on 31 May according to independent Meydan TV.

Although there is an appeal made to the local court on illegal deportation, unless the administrative detention where Abbasov has been placed receives the court decision by tomorrow Abbasov will be deported on 31 May.

22 May 2019 – Group of activists and family members of Abbasov have gathered outside the Russian Embassy in Baku protesting the arret of Abbasov and calling for his immediate release.

20 May 2019 – The embassy of Azerbaijan in Russia met with Abbasov reported Meydan TV.

The embassy also noted that it is following the case closely.

Journalist detained while covering a protest

18 May 2019 – Freelance reporter Nurlan Libre was detained while covering a protest in Sovetski neighborhood in the capital of Baku, reported Azerbaijan Service for Radio Free Europe.

Libre, was covering the residents’ protest who were unsatisfied with the compensation offered to them by the authorities for their homes that were being demolished.

Libre was released later during the day with the rest of the residents who were also detained by the local police.

In an interview with Azerbaijan Service for Radio Free Europe, Libre said, police told him they arrested him because the rest of the reporters covering the protest were women.

Journalist receives a warning from the prosecutor’s office

Mammadov explains while at the prosecutor office, he was told to stop writing stories about SOCAR- the state oil company.

Mammadov, is currently on a two year probation period. He cannot leave the country and must report to the relevant state body.

Criminal.az is an independent website covering predominantly crime-related stories. The website was blocked by the authorities in 2017, along with a number of other critical and independent news websites. It later began operating under the criminalaz.com domain, which was recently blocked.

Mammadov was questioned after publishing reports on an attempt on the life of the mayor of Ganja, Elmar Valiyev, on 3 July 2018.

9 May 2019 – After publishing an investigative story about SOCAR – the State Oil Company, the website of Meydan TV, that is already being blocked for access in Azerbaijan since 2017 received multiple DDoS attacks, reported independent Contact.az.

This is not the first time, the website is DDoSed after running a critical story or an investigative piece.

8 May 2019 – Lawyer Elchin Sadigov was unable to meet with jailed journalist Afgan Mukhtarli during his prison visit, reported Azerbaijan service for Radio Free Europe. Speaking to the Azerbaijani service of the radio, Sadigov said although at first he was informed it will take a few minutes to process his visit. Bur rather than receiving the permission he was told no visits were allowed after 16.30 in the afternoon.

Sadigov said, lawyers were able to meet with their defendants as long as they came before 17.00.

The penitentiary service where journalist Mukhtarli is being held, so far, has not provided any explanation.

1 May 2019 – Journalist Shafag Agajan was detained during a police raid in the capital of Azerbaijan, reported independent, Berlin-based Meydan TV.

According to police reports, Agajan was detained during a police raid against illegal drug sales across from a local hospital located in Baku.

Agajan refutes all the claims, and said it is a measure taken against her, by the authorities,  after her news agency, published a story about Ali Hasanov, the presidential aide and his direct influence in the sale of drugs at local pharmacies.

Agajan, was sentenced to three months in pre-trial detention on May 3. Following the court decision, Agajan said she is going on a hunger strike in protest against the court ruling.