Kostroma photographer detained and asked to admit to terrorism

28 September – Alexey Molotorenko, photographer with the regional media outlet 7×7, was detained by the National Guard of the Russian Federation (Rosgvardia), when he was taking photos outside the Rosgvardia building, 7×7 reported.

Molotorenko was approached by a several Rosgvardia officers, who demanded that he delete the photos. When he refused to do so, they reportedly grabbed him and took him into the headquarters, where they confiscated his phone and searched his bag.

Four officers, including one from anti-extremism section of the Ministry of Interior Affairs, questioned the reporter for four hours, demanding that he admit involvement in terrorist activities. According to Molotorenko, they threatened to “cause problems” for his family if he didn’t plead guilty. The journalist was taken to a local police department and subsequently released without charge. 7×7 called the incident unacceptable obstruction of journalistic activities and sent complaints to the police and Rosgvardia.

26 September – Natalia Vasilieva, a reporter with international news agency Associated Press, said she received threats from the Central Election Committee after interviewing its head Ella Pamfilova about the Moscow city parliament election that took place in August, which were met with mass protests against the disqualification of independent candidates, news agency Zakon reported.

Head of Petrozavodsk prison threatened to sue Zona.Media over an article about the torture of detainees

26 September – Ivan Savelev, head of Petrozavodak jail №9, threatened to sue Zona.Media over a piece they published about detainees being tortured, Zona.Media reported.

The article, which was published on 24 September, contained interviews with former detainees about torture they endured at the hands of Ivan Savelev.

Savelev says that he plans to sue the website, the journalist, and the former detainees that were cited for defamation. Savelev says he sent a complaint to the Investigative Committee regarding damage to his professional reputation.

25 September – Justice of the Peace of Zheleznodorozhny district court fined the Young Journalists of Altai Region 50,000 rubles ($778) for a 1999 hyperlink to the Open Society Foundation website, Zona.Media reported. George Soros’ OSF was deemed “an undesirable organization” by the Russian government in 2017.

“We forgot that we had it [the link] among the volume of information. But vigilant officials found it,” Sergey Kanarev the head of Young Journalists of Altai Region said.

24 September – A daily newspaper Izvestia, which belongs to the state-owned National Media Group, removed from its website the op-ed “The achievements of Sergey Shoigu as Defense Minister” by the military reporter Ilya Kramnik, who described the incident in a Facebook post.

Referring to an interview by the newspaper Moskovsky Komsomolets with the Defence Minister Sergey Shoigu, Kramnik wrote that it’s unlikely to be correct that the recovery of the Russian army was due to the appointment of Shoigu, since its reform was initiated by the previous minister. Kramnik also wrote that the defence ministry has taken more of a propagandist line since Shoigu’s appointment.

Kramnik reportedly said that he didn’t know the specific reasons behind the removal of the article but that some kind of administrative pressure was involved. The newspaper’s press service allegedly accused Kramnik of violating corporate standards and said that the article was deleted because it didn’t align with editorial standards. The newspaper said that the decision was made by the editorial board, which considered the material to be insufficiently developed with too many of Kramnik’s views rather than facts. Kramnik said that he didn’t receive any comments about the article until it was published. Kramnik is reportedly no longer working for the publication.

20 September – Radio Svoboda reported that Svetlana Prokopeva, a Pskov-based independent journalist, was officially charged with justifying terrorism for discussing whether the planting of a bomb by a 17-year-old student at a Federal Security Service headquarters last year was provoked by a repressive political regime. The journalist pleads not guilty. Her lawyers called the charges absurd.

Local journalist detained ahead of president visit to Izhevsk

19 September – Dariya Komarova, a reporter from Idel Real was detained in Izhevsk ahead of President Putin’s visit to the city, Idel Real reported. Policemen detained the journalist while she was taking photos of residents passing through security check-point to get to the main square. Komarova was released shortly afterwards, but was told that the police would be watching and checking her.

16 September – According to the media outlet Lenizdat, Andrey Klimov, the head of Federation Council’s Commission on Sovereignty Protection, accused the founder and editor-in-chief of investigative online outlet Proekt.Media, Roman Badanin, of studying in a “private intelligence school”, that prepares “anti-Russian journalists”. Klimov called Stanford University, where Badanin studied in 2017, a “CIA school”. 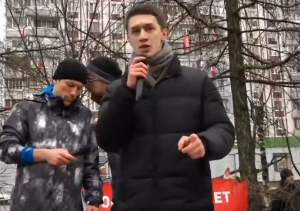 Prior to his arrest in August, Yegor Zhukov had urged people not to be cowed into silence. He had been participating in the protests.

14 September – Tatyana Kolobakina, reporter with the student media outlet DOXA, was detained in Moscow at a student rally in support of political prisoner and fellow student, Zona.Media reported. Kolobakina was detained alongside two rally participants, who were dressed in T-shirts with slogans “Freedom to Zhukov”. Kolobakina has a similar sticker on her bag. All the detainees were released briefly without any charges and were told that they had been mistakenly detained while police were checking “info about some organization”.

12 September – Mariya Karpenko, a former Fontanka reporter who was fired in March because of her personal Telegram-account on Saint Petersburg politics, became a target of several defamation articles, Lenizdat reported.

According to reports, the articles may be linked to Evgeny Prigozhin’s “media factory”, which publishes almost identical pro-government articles and targets independents journalists and opposition activists.

Source(s) of violation: Another media 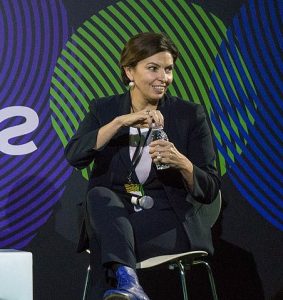 Dozhd CEO Natalia Sindeeva was summoned for questioning in September.

Dozhd CEO questioned over funding received during the July protests

10 September – CEO of independent broadcaster Dozhd, Natalia Sindeeva, was summoned for questioning related to funding Dozhd received during the July protests, Sindeeva said in Facebook post. During the protests in late July the broadcaster lifted the paywall and encouraged viewers to donate money.

Bus with journalists attacked in Tuva

7 September – A bus with journalists and observers, that were going to monitor and report on the local elections, was attacked with a gun fire at the border of Krasnoyarsk region and Tuva republic, local deputy Sergey Natarov said in his Facebook.

Witnesses say the bus was attacked by a group of around 10 gunned men.

The police said that nobody was injured and said that only the front wheels of the bus were damaged.

8 September – Journalists Ilya Azar and Natalia Ivleva were detained in the centre of Moscow before the rally in support of political prisoners, MBH Media reported. Later MBH Media reported that journalist Maxim Kondratyev was also detained.

According to court documents, the lawsuit was registered on 5 September. Fly Auto accuse Dozhd of organising mass protest against the disqualification of independent candidates for local elections, that as the company claims, resulted in billion damage due to cancelled orders for car rentals, disrupted services and protesters damaging cars.

15 November – Arbitration court of Moscow dismissed the lawsuit against Dozhd TV channel, quoting lack of proof in the documents provided by the company.