Journalist beaten and then detained while reporting 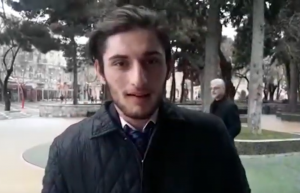 30 September 2019 – Freelance journalist Nurlan Gahramanli was filming a group of Karabakh war veterans being beaten by the State Oil Company security staff when he was attacked by the police and SOCAR security staff. He was beaten and sustained an injury on his face, before being taken to the police station where he was questioned. He was released later the same day.

In interviews with Meydan TV, the war veterans said that they were attacked by the SOCAR staff over a property which they say they acquired legally. SOCAR, in a statement, said that the building was acquired illegally and requested that the veterans pay a bribe to keep the property.

They say that their staff engaged in no physical violence and that the police were called. Police and the relevant government institutions are investigating.

23 September 2019 – Voice of America’s Azerbaijan correspondent Tapdig Farhadoglu was detained outside the Grave Crimes Investigation Unit building, according to the independent outlet Contact.az.

Farhadolgu was filming protesters outside the building when police abruptly stopped him, confiscated his camera and microphone, and took him to the police station where his phone was also confiscated. He was prevented from contacting his family or his lawyer.

He was released half an hour later, after receiving a warning not to engage in such activities again.

11 September 2019 – Tezehan Miralamli, a journalist with the opposition newspaper Azadliq, was covering a court case against opposition activist and member of Popular Front, Ruslan Amirli, when he was attacked by police officers who tried to push a group of journalists away from the courthouse.

Miralamli fell to the ground and received minor injuries. Azadliq condemned the forceful removal of journalists from the scene, and called for a fair investigation into the actions of the police.