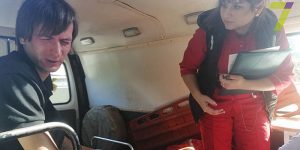 30 September 2019 – Andriy Kulba, a cameraman for Channel 7, was reporting on a domestic incident, involving a young child, in Odessa when he was assaulted with pepper spray. Paramedics who were called provided Kulba with first aid and he was taken to the burn department of a local hospital. Both of his forearms, as well as his neck, face and eyes were injured in the assault.

Journalist threatened with a gun

26 September 2019 – Video blogger Andriy Pylypovych was shooting a story on illegal construction in the city of New Kakhovka (Kherson region), when he was threatened with a pistol by a builder on the site.

“I was shooting a story for my video blog [on YouTube], and as a freelance correspondent for the newspapers Dniprovsky Prospect and Chas. We perceived the threat of “firing” at us as a joke until the builder pulled a gun out of the car,” Pylypovych told the Institute for Mass Information representative.

No one was injured and the police have opened a criminal investigation.

National Council on television to revoke licenses for TV channel

26 September 2019 – The Ukrainian National Council of Television and Radio Broadcasting made a decision not to extend broadcasting licence of 112 Ukraine TV channel, which is available in five Ukrainian regions, including Donbass, TASS reported.

A spokesman for the regulator, Serhiy Kostinsky, said that 112 Ukraine TV channel’s request to extend their licence would be denied. All members of the committee have backed this decision.

On 30 September, the OSCE Representative on Freedom of the Media, Harlem Désir, expressed his concern today over the decision taken by the media regulator, the National Council of Television and Radio Broadcasting of Ukraine, not to renew the digital terrestrial broadcasting licenses of five regional television companies.

“I hope that the National Council of Television and Radio Broadcasting of Ukraine will find a solution to preserve pluralism in the media environment,” said Désir. “It is important to ensure diversity in the broadcasting, while fully respecting the legal requirements, and balancing any regulatory decisions with access to pluralistic media.” 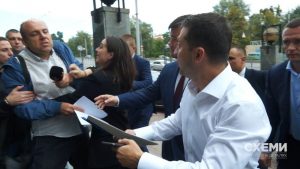 26 September 2019 – Radio Free Europe/Radio Liberty and UA:Pershyi correspondent, Serhiy Andrushko, was repeatedly pushed back by presidential press secretary Yulia Mendel, as he tried to approach the Head of the President’s Office and President Zelenskiy to ask them questions.

A video of the incident shows Mendel repeatedly shoving Serhiy Andrushko as he tries to approach the two men. The Head of the President’s Office, Andriy Bohdan, approaching the journalist and told him: “I do not communicate with representatives of the media, which deceive society and don’t adhere to journalistic standards. This is my final point.”

RFE/RL’s Kyiv correspondent Christopher Miller said he had encountered Mendel’s confrontational approach at a conference in Kyiv on 13 September. According to Miller, Mendel shoved him aside while he was talking to Zelenskiy at the conference.

23 September 2019 – KyivPost journalist, Anna Myronyuk, received a text message from pro-Russian fighters from the occupied areas of the Luhansk region saying that she could be be given up to 10 years to life imprisonment for alleged “genocide and prohibited means / methods of war”.

She was the third KyivPost journalist to have received such messages after sending their documents to the Joint Forces Operations press centre about three weeks ago. She wrote on Facebook: “I have reason to believe that there was another leak of the data of journalists who have applied for accreditation to work in the combat zone or the Joint Forces Operations zone. Colleagues from other media who did not apply for accreditation during this period did not receive such threats. I will be happy to be incorrect, but so far everything looks different – that it is not becoming safer to work as a journalist in Ukraine”.

Olga Rudenko, KyivPost deputy editor-in-chief, said that SMS messages were received by journalists who had not yet travelled to the Joint Forces Operation zone. British journalist Reece Lynch is also reported to have been threatened.

The assault on the journalist occurred at night, during the village celebrations in the local House of Culture. According to Institute for Mass Information, Ryshchuk hit the journalist on the head and in the shoulder and then took his phone, breaking it.

The police opened a criminal investigation under the article “intentional slight bodily injury.”

6 September 2019 – Journalist Kateryna Kolgan of 2+2 TV’s DjeDAI (ДжеДАІ) program was assaulted by a motorist in Kyiv, the National Union of Journalists of Ukraine reported.

Kolgan posted on Facebook that the program crew was filming a story about violators of traffic rules in the urban district of Borshchagovka. According to the National Union of Journalists of Ukraine, one of the drivers who Kolgan approached for interview, punched her from his car. In doing so, he knocked her mobile phone from her hand and drove over it.

The journalist was not injured but the phone was damaged as a result of the incident. “I’m glad that only the mobile phone was broken – and not my leg. The car came very close to my foot,” Kolgan wrote.

The journalist contacted the police, saying that she has a video, which shows both the driver and the car number.

5 September 2019 – The Ukrainian National Television and Radio Broadcasting Council has accused the News 24 Hours TV channel of inciting ethical, racial, and religious strife, noting that it is going to file a lawsuit to deprive the TV channel of its license, the KyivPost reported.

The council said that it recorded violations during News 24 Hours’ unscheduled inspection of the TV station in July, which came about as a result of NewsOne TV’s (which is owned by News 24 Hours) intentions to hold a TV link-up with the Russia-1 TV channel on 8 July.

Reading out the council’s decision, Herasymiuk accused the TV channel of “inciting ethnic, racial, or religious animosity or hostility in statements that were made live on the News 24 Hours TV channel between June 6, 2019, and July 8, 2019”.

In a statement on its website, NewsOne said that the National Council’s decision is based on multiple violations of the law that have taken place before and during the inspection of the TV channel. “The National Council blatantly and cynically displayed the negligence of legal procedures and put a rude pressure on its employees in order to ruin the independent TV channel,” NewsOne said in the statement.

5 September 2019 – Bellingcat journalist Oleksiy Kuzmenko received an anonymous e-mail containing a link to the video and death threats after he tweeted about a far-right festival held in Kyiv by the Azov movement. He received other insults and threats by various far-right groups.

Since Bellingcat published an article on the translation of the Christchurch shooter’s manifesto in mid-August 2019, Michael Colborne and Oleksiy Kuzmenko have been consistently harassed and threatened online.

In August, a threatening video appeared on a far-right Telegram channel that promotes the Christchurch shooter’s manifesto. The video featured the photographs of Michael Colborne, Oleksiy Kuzmenko and fellow journalists Dmitry Gordon and Valerie Kipnis, being shot one by one with a firearm. It was posted with the following message: “This video is kind of an instruction manual on how to deal with our enemies.” Michael Colborne’s photograph showed him as he was beaten up while covering an anti-LGBT rally in Kyiv last November.

Nazarova told the Institute for Mass Information that she was sitting near Tolkach at a meeting and placed the audio recorder on the table. Tolkach grabbed the recorder and put it in his pocket, saying that she was not allowed to record him. He ignored her requests to give her back the recorder.

The journalist then began using her phone to record, but the deputy grabbed her phone and threw it. Describing the incident, she said, “He took the recorder, so I turned on the recorder on my mobile phone. I put it on the table. He picked up the phone and tossed it on the floor. He shouted to us that ‘your place is in the corner, get in the corner and write from there’.”

As a result, the meeting was suspended and the journalist called the police. The police launched an investigation under the article “Obstruction of the legal professional activity of journalists.”