19 October 2019 – Multiple media outlets reported the arrest and assault of journalists during an unsanctioned rally against corruption and low wages in Baku.

According to the independent reporter Ulviyya Ali, Nurlan Libre was assaulted in the police car after being detained at the rally. At least three journalists were reported to have sustained minor injuries as a result of police actions: Sevinc Vagifqizi sustained bruises on her arms, while Ramin Deko and Shahla Abbasova also sustained minor injuries. Journalist Tazakhan Miralamli was held at the police station for more than four hours. None of the journalists filed complaints against the police. 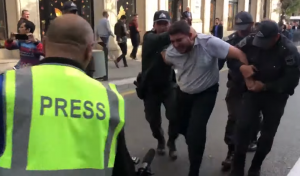 More than 80 people were reportedly arrested during the protests in October, including at least eight journalists.

17 October 2019 – Meydan TV journalist Seymur Hezi was arrested while leaving his house in Baku two days before a scheduled protest, Hezi’s wife Nigar told the Committee to Protect Journalists. He was sentenced to 15 days in administrative detention for alleged hooliganism and noncompliance with police orders. Hazi was reportedly intending to cover the protests, which were due to take place on 19 October.

The arrest came less than two months after the journalist was released from prison, where he served 5 years on charges of hooliganism. Hazi was recognized as a prisoner of conscience by Amnesty International. The European Court of Human Rights had ruled that his detention was illegal.

29 October 2019 – Azadliq Radio reported that Seymur Hezi was sentenced to an additional 15 days in administrative detention.

16 October 2019 – Online news site Sozcu.az reported that 7gun.az’s editor, Javid Shiraliyev, was the victim of an attempted arson attack. His house was set on fire in the early hours of 16 October. 7gun.az had previously published a series of stories about corruption in Azerbaijan.

Shiraliyev said that despite the family being at home at the time of the incident, no one was injured. He had reported the incident to the police.

Shiraliyev said he believed that the attack was in retaliation for the series of stories his outlet published about corruption and local governance violations in Masalli administrative district.