24 October 2019 – Journalist Emre Orman, a reporter for Net news agency, was arrested in Istanbul and subsequently jailed pending trial on the charge of “spreading propaganda for a terrorist organization” on account of his social media posts, Evrensel reported.

Orman was arrested on 23 October 2019 and sent to pre-trial detention after giving a statement to a prosecutor at Istanbul’s Anadolu Courthouse on 24 October.

1 November 2019 – According to Bianet, Orman was released from detention on 31 October.

22 October 2019 – Police raided the house of Eren Keskin, a prominent human rights defender and co-chairperson of the Human Rights Association (İHD), Mezopotamya news agency reported. Keskin has been prosecuted more than a hundred times for her symbolic support for the shuttered pro-Kurdish newspaper Özgür Gündem.

Keskin was not at home during the late-night raid. She testified to a prosecutor the following day, responding to accusations that she was “spreading propaganda for a terrorist organization” in her social media posts. Keskin was released without judicial control measures. 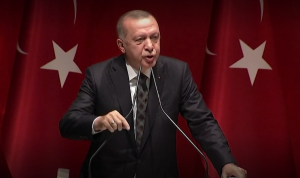 On 10 October, President Erdoğan threatened that he would “open the gates” to the EU if they called his military operation an “invasion”.

20 October 2019 – Özlem Oral, a reporter for the left-wing Mücadele Birliği newspaper, was arrested during a police raid on her home on 19 October, Mezopotamya news agency reported. Oral was accused of “disseminating propaganda for a terrorist organization” and “inciting the public to hatred and animosity” for her social media posts about Turkey’s military operation in Syria. She was referred to the courthouse on 20 October and was subsequently released under a travel ban and has been ordered to report to the police station once a week.

19 October 2019 – Police carried out an early morning raid on columnist and T24 contributor Nurcan Baysal’s home in the southeastern city of Diyarbakır. Announcing the incident on Twitter, Baysal said that she was abroad when the raid took place, and therefore she was not arrested, but her two children were at home at the time of the raid. Baysal said that she believed the raid to have been in connection with her social media posts.

17 October 2019 – Tuğba Özer, an editor for Cumhuriyet daily, was ordered to pay 5,000 Turkish lira (around $875) in compensation over a news report, Bianet reported. The lawsuit was overseen by the 23rd Civil Court of First Instance of Istanbul.

The lawsuit was filed by the conservative and Islamist İHH Humanitarian Relief Foundation over Özer’s report about an elementary school teacher volunteering for İHH. Özer reported that the teacher had made his students pose for a picture as they held pieces of rope symbolizing the executioner’s rope and shared these pictures on social media.

The picture was posted at a time when President Erdoğan was reigniting the debate on bringing back the death penalty. The report says that the teacher shared the picture in which he is seen showing the rope on his social media account, saying “Either the state should take the lead or the raven will hover over the dead. President! We want justice.” The message came after a terrorist attack near the Inönü stadium in Istanbul’s central neighborhood of Beşiktaş killed 48 people, mostly police officers. In another social media message the teacher is seen forcing his students to make a military salute in the classroom. The teacher was suspended after the report caused a wide outcry.

10 October 2019 – Hakan Demir, editor of the website of BirGün daily, was taken into custody during an early morning police raid on his Istanbul home, Bianet reported.

The grounds for Demir’s arrest was “the way in which a news item posted on the newspaper’s online edition was shared on Twitter.” The report referred to the military operation launched by the Turkish military in Syria on 9 October.

Demir was referred to the courthouse later in the day. The 13th Criminal Judgeship of Peace ruled to release the journalist under an international travel ban.

10 October 2019 – The managing editor of the news portal Diken, Fatih Gökhan Diler, was arrested at Diken’s offices in Istanbul, the website reported. Diler was eventually released under a travel ban by the Criminal Judgeship of Peace.

Diler was reportedly detained as part of an investigation on the allegation of “incitement of hatred and animosity” in a news story published by Diken that featured a statement by the speaker of the Kurdish-led Syrian Democratic Forces (SDF). The Turkish military launched an operation in Syria on 9 October, mostly targeting Kurdish forces controlling the border.

10 October 2019 – Reporter Beritan Canözer of the Diyarbakır-based pro-Kurdish and feminist news website JinNews had her home raided by police, Bianet reported. During the raid, police confiscated several magazines and newspapers they found in her apartment.

Police officers informed Canözer’s sibling, who was alone in the apartment when the police came, that the journalist was being summoned to the Diyarbakır Police Department to give her statement in connection with her social media posts.

While thanking broadcasters for “meeting society’s need of being informed with accurate information and contributing to national unity and togetherness,” RTÜK said it would not tolerate negative coverage of the operation. In the statement, RTÜK said that divisive and destructive broadcasts against Operation Peace Spring, published with the support of the [PKK] terrorist organization, are being swiftly identified and silenced with the support of other state institutions.

7 October 2019 – Evrensel writer Ender İmrek is facing an investigation over a column he wrote about First Lady Emine Erdoğan, the newspaper reported.

In a Twitter post, Imrek said he was called to testify at the police station over his column.

On the surface, Belarus is one of the quieter places for journalists – one rarely hears about gruesome violations, physical assaults or murders of media workers in this post-Soviet country. But a lack of horror stories does not mean there is a liberal policy towards the media. In 2017, Belarus scored 83 points out of [...]