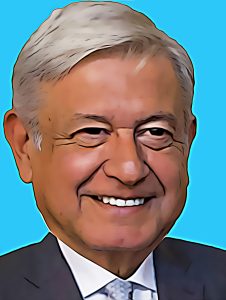 “He who has nothing to hide, has nothing to fear”. These were the words uttered by the Mexican president, Andrés Manuel López Obrador in a February 2022 press conference held the day after Heber López Vásquez, founder and director of the digital news outlets NoticiasWeb and RCP Noticias, was shot and killed. However this was not a call for greater transparency and action to respond to the ever-climbing rate of journalist murders in Mexico. He was publishing what he alleged were the confidential financial details of leading journalist, Carlos Loret de Mola, in response to the journalist’s reporting.

“This act of intimidation and the abuse of the presidential office would be egregious in any circumstance. However In Mexico, against a backdrop of rampant impunity and one of the worst track records for the safety of journalists, it is far worse than that,” says Index’s policy and campaigns officer Nik Williams. “According to the Committee to Protect Journalists, 151 journalists and press workers have been killed in Mexico since 1992. The causes of these murders are complex; but a messy tangle of narco-politics, organised crime, corrupt police and state officials and runaway impunity has made Mexico one of the most dangerous locations to be a journalist outside a warzone. In fact, so far in 2022, Mexico is second only to Ukraine for the number of journalists killed.

Since Obrador only came to power in 2018, it would be overly-simplistic to lay this solely at his feet. However, according to Article 19, attacks on the press have increased by 85% since he took power, with every single Mexican state witnessing such incidents for the first time in 2021.

When there is a culture of impunity and the devaluing of journalists, the scene is set for violence. It is this erosion of the civic fabric that makes Article 19’s director for Mexico and Central America: “His [Obrador’s] speech causes other political actors to replicate his attacks. These actors feel empowered and allowed to attack in the face of a narrative that presents the press as an adversary. We are in a war speech, where the enemy must be annihilated.”

After publicly leaking Carlos Loret de Mola’s alleged salary and potentially violating Article 16 of the Mexican Constitution in the process, Obrador labelled journalists who are critical of him as “thugs, mercenaries, sellouts” and “the real mafia.” This framing establishes a false and dangerous parallel between the free press and criminal enterprises, further emboldening threats that can soon escalate to violence.

Impunity, the like of which is found in Mexico, requires significant and proactive action to address. It is not something that will just right itself when no one is looking. It requires a commitment to the value of free expression. It requires action. According to Human Rights Watch, “[o]f the 105 investigations into killings of journalists conducted by the federal Special Prosecutor for Crimes Against Freedom of Expression (Feadle), since its creation in 2010, just six have led to homicide convictions.” What good is a dedicated prosecutor if the rate of convictions is so low? Not only is this a failure to the family, friends and colleagues of the murdered journalists whose killings are being investigated by Feadle, this is a signal to those seeking to silence critical reporting: you can continue uninterrupted and undisturbed. This weakening of the mechanisms by which journalists can be protected is also seen in the 2020 decision of the Mexican Congress and supported by Obrador, to eliminate the independent funding that supported the Federal Mechanism for the Protection of Human Rights Defenders and Journalists. Now the mechanism is dependent on the Interior Ministry to pay for protection measures, but funds have been consistently cut. Leading media freedom organisations and 14 members of US Congress have raised concerns about this, seemingly to no avail.

Williams says: “What Obrador sees as a war against the elites, we see as a war against journalists, and ultimately free expression. Without Obrador stepping forward and addressing the ingrained climate of fear and impunity, instead of fixating on those who report on uncomfortable facts, Mexican journalists will remain stuck in the crosshairs of those seeking their silence.”