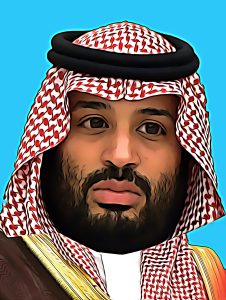 “Mohammed bin Salman should be awarded the title of ‘tyrant of the year’ not only because of his track record of censorship and suppression, but also because of the potential for violent tyranny to come” says Emma Sandvik Ling, partnerships and fundraising manager at Index on Censorship.

At only 37 years old, Mohammed bin Salman, colloquially referred to as MBS, is the youngest of the tyrants on our list. He therefore has the potential to offer a suppressive regime for decades to come.

In 2022, MBS celebrated his appointment as prime minister. The crown prince and de facto ruler has held various political positions since he became minister of defence in 2015, though his father King Salman bin Abdulaziz, 86, still holds the throne.

While Saudi Arabia is committed to a more liberal, globalist image, those calling for freedom of expression still face harsh punishments. In October, three members of the Al-Huwaiti tribe were sentenced to death for resisting eviction caused by the $500 billion NEOM development. Meanwhile, the University of Leeds student Salma al-Shehab has been sentenced to 34 years in prison for retweeting Saudi activists. On 12 March, 81 men were executed for “terrorism and holding deviant beliefs” including 41 who were believed to be minority Shia Muslims who took part in anti-govenrment demonstrations in 2011. Women, minority groups, activists, and journalists alike face severe consequences for speaking out against the regime.

Adding insult to injury, Bin Salman’s behaviour appears to be tolerated – if not accepted – internationally. In November 2022 the US State department granted the crown prince diplomatic immunity from prosecution over the brutal assassination of journalist Jamal Khashoggi. This is despite President Biden’s repeated assurance that he would hold MBS accountable for his involvement. Due to Saudi-Arabia’s important financial and strategic ties, MBS looks poised to rule for years to come.

“As the world watches on, bin Salman continues to exert power in horrific ways. His rule will likely continue to restrict basic freedoms in Saudi Arabia and beyond,” says Sandvik Ling.