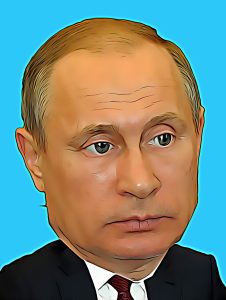 Vladmir Vladimirovich Putin is the tyrant’s tyrant in more ways than one. Over the two decades he has dominated Russian politics as president and prime minister, he has set a new standard in the brutal oppression of opponents at home and abroad. His illegal invasion of Ukraine on 24 February has had a devastating effect on the global economy and turned Russia into a global pariah. But he has also been a consistent champion of other tyrants, whether it is Ayatollah Khamenei, the supreme leader of Iran, President Assad of Syria or his closest ally in the region, President Lukashenska of Belarus.

The horrors perpetrated by the army sent to Ukraine in 2022 by Putin are too many to catalogue here. But they include torture and summary execution, as evidenced from the mass graves of Bucha, the forced deportations of citizens of occupied territories in the east of the country, indiscriminate attacks on civilian targets such as the maternity hospital in Mariupol and sexual violence used as a weapon of war. As winter sets in his forces have targeted power facilities, leaving many Ukrainians without light, heat and water in freezing conditions.

Meanwhile, in Russia itself the independent media has been crushed, with many journalists silenced or forced into exile. New legislation has turned protesters into traitors. Even calling Russia’s intervention in Ukraine a war has been deemed a crime, with anyone convicted of spreading “false information” facing a 15-year prison sentence.

“Most tyrants only brutalise their own people or the countries they invade. But Putin is a truly global tyrant who has made the whole world a poorer place by strangling the supply of Russian oil and gas and Ukrainian grain. And he has made it a more dangerous place by bringing the threat of nuclear war to Europe. Tyrant of the year? More like tyrant of the century,” says Index’s editor-at-large Martin Bright.