"The court hearing took place today [Dad] so I already know how you had to ‘get changed’ – I bet everybody in the detention centre could hear me laugh!"

Reader’s Note: In September 2020, the prominent Belarusian opposition figure Maria Kalesnikava was abducted from Minsk and taken to the border where security forces tried to expel her from the country; she ripped up her passport in defiance. In the days that followed she was charged with incitement to undermine national security and placed in pre-trial detention. 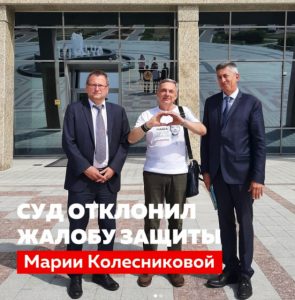 The letter that follows (the original is at the bottom of the page) was written by Maria Kalesnikova to her father on 16 July 2021, the day the Supreme Court rejected her complaint regarding the extension of her detention until 1 August. Her father, Aliaksandr Kalesnikov, had gone to the hearing to support his daughter wearing a T-shirt with Maria’s image on it (pictured right). He initially refused access to the hearing so he took off the T-shirt, turned it inside out, and put it back on. He was then allowed to enter.

Aliaksandr has repeatedly been refused the right to visit Maria in detention. According to Maria’s sister, Tatsiana Khomich – referred to as “Tania” in the letter, Aliaksandr has been denied permission to see his daughter on every occasion (more than fifteen times) with no explanation. On 4 August, Maria went on trial facing up to 12 years in prison on charges of extremism. The trial was closed to the public, including family members. Maria’s family said it was a relief to see her healthy and cheerful at the trail, albeit on television screens.

Tatsiana said that although Maria is writing a lot, her letters have become increasingly infrequent. Suppression of letters from political prisoners in Belarus is commonplace, denying family members and loved ones the chance to hear vital news. This is done to put pressure on individuals and their families. The letter below is the last communication Maria’s family have received from her. One year since the fraudulent elections in Belarus, Maria’s sister agreed to publicly share this personal letter between Maria and her father.

Letter from Maria Kalesnikava to her father Aliaksandr Kalesnikov:

How are you doing in this trying time?

I’m constantly thinking of you, grandpa and all our nearest and dearest – sending my hello’s and lots of hugs to all!

The court hearing took place today so I already know how you had to ‘get changed’ – I bet everybody in the detention centre could hear me laugh! You really think fast on your feet. You see, now nobody can doubt that I’m my father’s daughter – and I’m so proud to be one!

I’m so glad that you are keeping your spirits high and are managing to get through these crazy days with a good sense of humour :)

Today I received two! Letters from you and two from A.

You wrote that you’re in awe with Tania – I’m also writing this in every letter to her. What she’s doing for me and our whole team is unbelievable and incredible.

Please ask her, as do I, to make sure that she takes good care of herself and makes every effort to find time to rest.

And of course, the joke that your Berlingo [car] is crumbling and ageing faster than you are has also put a smile on my face. And so it should be, Dad, you’ve got no need to crumble!

Sending you and everybody a big-big hug!