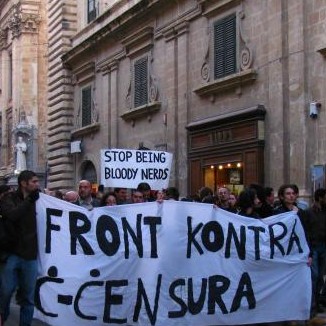 The student at the centre of Malta’s anti-censorship movement has been acquitted of publishing pornographic and obscene material in his campus newspaper.

Mark Camilleri, a postgraduate history student at the University of Malta, was facing up to nine months in jail over a fictional account of a Maltese man’s sexual conquests and degrading attitude towards women.

The trial had been hanging over him for more than a year after the University’s Rector, Professor Juanito Camilleri, banned the newspaper and reported him to the police in October 2009.

Camilleri, and the writer of the story, Alex Vella Gera, were accused of distributing obscene or pornographic material and for undermining public morals or decency, under both the Criminal Code and the Press Act. Vella Gera was also acquitted.

Magistrate Audrey Demicoli ruled that the prosecution had produced no evidence to define public morality in Malta and how it had been infringed.

She added that public morality was something which changed over time, and what offended public morals 20 or 30 years ago did not necessarily do so now.

The court’s decision is a boost for all writers and artists in Malta, many of whom are part of the “Front against Censorship” (FaC) — a protest movement campaigning to liberalise Malta’s censorship laws.

Camilleri’s lawyer Alex Sciberras welcomed the ruling but warned that the laws themselves still needed to be changed before artists could work with the same freedom enjoyed by those in other European Union countries.

“This case is a very important judgment, not only for Mark and Alex,” said Sciberras, “but also in getting a definition of what artistic expression means in this country.

“It found that they were expressing their freedom of speech and transferring their ideas and will have deep repercussions in Maltese society. It will also strengthen the case for changes in the legislation.

“But since we don’t have the law of precedent that exists in the UK there is still nothing to stop the police prosecuting another artist for the same thing. We need parliament to change the definition of obscenity and pornography as at the moment it’s too wide.”

Camilleri says his acquittal will increase the pressure on parliament to change the laws and plans to continue his campaign.

“We now have a better footing to convince parliament to change the laws. This is one of the first cases that has come out against censorship in recent months and shows we shouldn’t be treated as criminals for writing pieces of fiction. I will feel much more comfortable publishing in the future.”

It urged the government not to appeal the sentence and instead to modernise the laws on freedom of artistic expression, in agreement with the opposition.

The Front against Censorship was set up following a series of rulings in the last couple of years which have restricted artistic freedom.

The conviction of a video DJ, who was prosecuted for projecting an image of a naked woman, followed by one of the pope during his set;

– The ordered removal of nude paintings from an art exhibition.

– Revellers prosecuted under blasphemy laws for dressing up as priests during a carnival.

– An ongoing case concerns the banning of Scottish playwright Anthony Neilson’s play “Stitching”. Malta’s Board of Film and Stage Classification, which has the power to ban productions, deemed it unacceptable on the grounds of blasphemous and obscene content.
The play’s producers are currently suing the government to overturn the ban and will take the case to the European Court of Human Rights if they fail.

Charles Young’s documentary about censorship in Malta will be broadcast on Al Jazeera English next month.

Photo: Protests in February 2010, via Indymedia

One response to “Maltese student no longer faces jail for story”