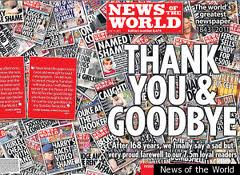 “Junk journalism is the evidence of a society that has got at least one thing right, that there should be nobody with the power to dictate where responsible journalism begins.” So said Sir Tom Stoppard, doyen of free speech defenders.

There’s a natural fear among journalists who haven’t troubled Steve Coogan recently that the News International phone hacking scandal will result in the granting of just such power to state-selected folk, via an OFCOM-type regulator for the UK press or a slew of new laws.

A panicked and exposed British political establishment is ready to strip journalists of what little expectation of exception they have left. The scandal surrounds plain criminal or civil offences under the Regulation of Investigatory Powers and the Data Protection Acts in the UK, the Bribery Act and abroad, deeply relevant to News International’s North American fortunes, the US Foreign Corrupt Practices Act.

These are acts that can’t be excused as “newsroom culture“, the bleating of privileged celebs or by the police’s inabilility or unwillingness to prosecute earlier offenders. There is no public interest defence. Without that the journalist’s crimes have no more to do with his trade than it would be if he fiddled his tax or murdered his postman.

Up until now the British media has been slow to reflect on its sins — surely the first obligation of an industry which expects the right to self-regulation — and short of examples of good practice to weigh against bad habits.

The Daily Telegraph’s expose of MPs’ expenses abuses proved a charge of handling stolen property, the confidential files they bought to get the story, could be trumped by a public interest defence.

Other arguments in defence of the media’s qualified right to occasional criminality are couched in improbable scenarios: “What if one discovered that Britain was about to launch a nuclear war on China? Who would seriously think to himself: ‘No, I broke the law on the interception of communications in this story, so forget it!’”

Inquiries into the bad behaviour of the News of the World will teach us a lot about criminality among “media workers” who hang out with detectives in bars. The danger is that it won’t take us closer to a system based on understanding of what is, and what is not “in the public interest“.

Most UK media concerned with stories in the public interest employ the kind of journalists who by and large, act ethically. The News of the World had its fair share of scoops. But it didn’t get to be the planet’s biggest selling English-language paper by writing in the public interest for 168 years. It did it with salacious gossip and by intruding on the privacy of celebrities.

Only when it turned to crime to get that gossip, compounding the offence by targeting ordinary victims of bad news as well as celebrities, was it pushed off the toilet seat and into it.

It’s in the States where the big thinking is done around law breaking in pursuit of a story. Starting from the First Amendment, US law is tolerant of illegally obtained stories with legitimate public interest. ABC TV’s repeat offence, illegally smuggling radioactive material past a fumbling Department of Homeland Security for one, or journalists using false identities to expose corporate illegality such as faking sell-by dates on meat or pressing needless medical care on vulnerable pensioners.

Even the Washington Post’s famous Watergate investigation technically broke the law by trying to secure details of evidence in a pending Grand Jury hearing.

But the First Amendment is not a licence for illegality. The Supreme Court has repeatedly said reporters who trespass, bug or break laws that apply to the rest of the public aren’t immune from prosecution just because they were gathering news at the same time.

US media can pre-test the premise to see if the story warrants breaking a law to “achieve the journalistic watchdog purpose”. Clarity on terms like “public interest” helps inform editorial meetings to discuss the appropriateness of illegal acts in pursuit of a story, but before both are commissioned.

These seem to have been the kind of editorial meetings News International executives missed, but where, quoting media ethics expert Bob Steele, news organisations can apply a six point test to decide if the journalist’s “ethical duty to reveal important truths” justifies breaking a law:

Balancing the competing interests of the public’s right to know versus the government’s claim of national security, or increasingly, the right to privacy, commercial confidentiality or right to a family life is not easy.

As the UK Information Commissioner’s Office (ICO) pithly notes: “From time to time weighing competing interests may be difficult. However, this does not mean that the nature of the task facing a public authority when applying the public interest test is unclear.”

So is there a need for a new public authority in the UK to weigh those competing interests and define what is in the public interest? To define what “public interest” ends, or back to Sir Tom, to “dictate where responsible journalism” begins?

Correct. They should be allowed to exclusively continue to do so. Handily, a court can quickly round up twelve members of the public to to hear both sides. Then leave them to decide what “the public interest” is. Case by case.

Rohan Jayasekera is Associate Editor at Index on Censorship