The decision to commute the sentences of five activists recognises that they should not have been prosecuted in the first place, but authorities should also expunge the convictions from their records, an international coalition of seven international organisations said today. On 28 November, the United Arab Emirates president commuted the sentences by the Federal Supreme Court for “publicly insulting” UAE rulers. 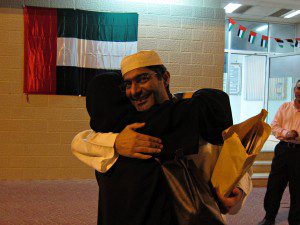 While commuting the sentences was a positive step, UAE authorities should now protect the activists, known among their supporters as the “UAE 5,” and their associates from pro-government vigilantes, and immediately investigate the numerous threats against them, said the coalition, which includes Index on Censorship, Alkarama (Dignity), Amnesty International, the Arabic Network for Human Rights Information (ANHRI), Front Line Defenders, the Gulf Centre for Human Rights (GCHR), and Human Rights Watch. The authorities should conduct an independent judicial review into their arrests and trial, which did not meet international due process standards, and compensate them for the more than seven months they spent in prison, the coalition said.

“Freeing the UAE 5 is a positive step but they should never have spent a single day behind bars, let alone seven months,” said Sarah Leah Whitson, Middle East director at Human Rights Watch. “A commutation alone will not undo the government’s terrible mishandling of this case.”

On 27 November, a panel of four judges found all five men guilty and sentenced Ahmed Mansoor, a prominent UAE reformer, to three years in prison, and the others to two years. In contravention of international fair trial standards, the detainees had no right of appeal because the case was prosecuted under state security procedures.

The men were released on the evening of 28 November, after the UAE president, Sheikh Khalifa bin Zayed Al-Nahyan, commuted the sentences. Representatives from the rights coalition who met with Mansoor upon his release said he looked frail and thin from his incarceration, which included a two-week hunger strike. Mansoor said he had lost 24 kilograms during his time in jail.

Commutation of the sentences may still leave the activists with a criminal record, a lawyer for the men said. UAE authorities should exonerate them and expunge the conviction from their records, which otherwise will make it difficult for the men to find work and travel, the groups said.

“The release of these men will not prevent such a travesty of justice from happening again,” said Hassiba Hadj Sahraoui, deputy director of the Middle East and North Africa Programme at Amnesty International. “For this release to be more than a public relations exercise, it needs to be matched by the immediate decriminalization of defamation and an overhaul of the justice system.”

The groups said that the UAE should invite UN experts on freedom of expression and on the independence of judge and lawyers. A report by a trial observer representing the coalition found flagrant flaws in the administration of this case. Her recommendations included the dismissal of charges against the five.

The activists and their families have been the targets of a vicious smear campaign of threats, slander, and intimidation that authorities have failed to investigate or prosecute, the rights groups said. In the most recent incident, on 27 November, a pro-government supporter assaulted a relative of one of the detainees and shouted threats and obscenities outside the courtroom, despite the heavy security presence after the verdict. An independent report on 25 November written on behalf of the Gulf Centre for Human Rights, with research assistance from Human Rights Watch, documented the threats by government sympathizers and the atmosphere of impunity in which they have been made.

“The UAE 5 may finally be free, but their personal security is still at risk because of a smear campaign carried out with impunity,” said Rachid Mesli, director of Alkarama’s Legal Department. “The authorities should stop looking the other way and start prosecuting those making death threats.”

The five activists were arrested in April. Their trial opened on 14 June in Abu Dhabi. They are: Ahmed Mansoor, an engineer and blogger and a member of Human Rights Watch’s Middle East and North Africa Advisory Committee and a member of ANHRI’s network; Nasser bin Ghaith, an economist and university lecturer at Sorbonne Abu Dhabi; and online activists Fahad Salim Dalk, Ahmed Abdul-Khaleq, and Hassan Ali al-Khamis. The five were charged under article 176 of the penal code, which makes it a crime to publicly insult top officials, and with using the banned online political forum UAE Hewar. The rights groups reviewed the messages allegedly posted by the accused, none of which do more than criticize government policy or political leaders. There is no evidence that the men used or incited violence in the course of their political activities. The rights groups have said that the prosecution of the five men violates the right to freedom of expression under the UAE’s constitution as well as international human rights law.

The court patently violated the activists’ fair trial rights, the coalition said. The court did not allow the defendants to review the evidence and charges against them until six months into the trial. It did not allow defense lawyers to cross-examine one prosecution witness and did not provide sufficient time to cross-examine others. Without explanation, the authorities closed the first four hearings to the public, journalists, international observers, and the families of the accused. On multiple occasions, the court denied or failed to rule on motions to release the defendants on bail, even though none of the defendants were charged with a violent offense, and authorities did not suggest that they posed a flight risk.

The UAE penal code makes the peaceful expression of critical views of the authorities a criminal offense, subject to a prison sentence, in contravention of international human rights guarantees of free speech. Article 176 of the penal code permits a sentence of up to five years in prison for “whoever publicly insults the State President, its flag or national emblem”. Article 8 widens the application of the provision to include the vice president, members of the Supreme Council of the Federation, and others.

Mansoor faced additional charges of inciting others to break the law, calling for an election boycott, and calling for demonstrations. In March, shortly before his arrest, he publicly supported a petition signed by more than 130 people advocating universal, direct elections for the Federal National Council (FNC), a government advisory board, and legislative powers for the council. Before his arrest he gave numerous television and other media interviews on the issue.

The International Covenant on Civil and Political Rights (ICCPR) holds that “everyone shall have the right to freedom of expression… to seek, receive and impart information and ideas of all kinds.” While the UAE is not a party to the ICCPR, it reflects authoritative international standards, which allow content-based restrictions only in extremely narrow circumstances, such as cases of slander or libel against private individuals or speech that threatens national security.

Article 32 of the Arab Charter on Human Rights, which the UAE has ratified, guarantees the right to freedom of opinion and expression, and to impart news to others by any means. The only restrictions the charter allows on the practice of this right are those imposed for “respect for the rights of others, their reputation, or the protection of national security, public order, public health, or public morals.” Article 13(2) of the charter also requires judicial hearings to be “public other than [except] in exceptional cases where the interests of justice so require in a democratic society which respects freedom and human rights.”

The United Nations Declaration on Human Rights Defenders provides that countries should “take all necessary measures to ensure the protection of everyone against any violence, threats, retaliation, adverse discrimination, pressure or any other arbitrary action” as a result of their participation in human rights activity.