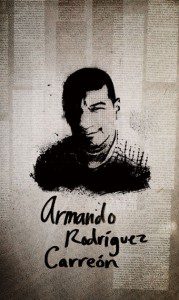 Join us in demanding justice for crime reporter José Armando Rodríguez Carreón, 40,  who was shot at least eight times in a company-owned car parked inside his garage on 13 November 2008. His 8-year-old daughter, who was in the backseat, was uninjured. Rodríguez had recently written an article accusing the local prosecutor’s nephew of having links to drug traffickers. Earlier that year, as a result of threats to “tone it down,” Rodríguez was temporarily transferred to El Paso, Texas, for his safety. But on his return he insisted on resuming work without any special protection. He said, “The risks here are high and rising, and journalists are easy targets. But I can’t live in my house like a prisoner. I refuse to live in fear.”

In July 2009, the lead investigator on Rodriguez’s murder was shot to death. Less than a month later, his replacement was also murdered. Not one of the three cases has been solved. Drug-related violence has reportedly killed more than 35,000 in Mexico since the government launched an armed offensive against drug cartels five years ago. And as reported often by IFEX members, more journalists have been killed in Mexico than anywhere else in Latin America