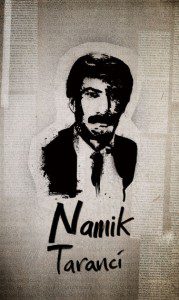 Join us in demanding justice for Namik Taranci, who worked for the leftist weekly “Gercek”, was attacked and killed by at least two armed assailants on a Diyarbakir street on 20 November 1992. One attacker grabbed Taranci by the shoulder, shot him three times in the head, and continued firing after the journalist fell to the ground. Before his murder, Taranci reportedly received a death threat by telephone. “Gercek” had reported on the Shi’ite Muslim militant group Hezbollah, which was allegedly collaborating with Turkish security forces in their fight against the Kurdish Workers’ Party (PKK).

According to the Committee to Protect Journalists, 20 journalists have been killed in Turkey since 1992.

One response to “Take action to end impunity : Namik Taranci”