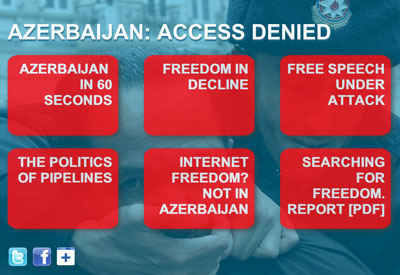 Azerbaijan’s chaotic capital Baku has been spruced up this year for the government’s two propaganda victories — its hosting of the Eurovision song contest earlier in the year, and this week’s Internet Governance Forum (IGF). That a global forum debating the future of internet freedom should be held in an autocracy (Autocracy 2.0 as blogger Emin Milli dubbed it) has raised questions over the UN’s criteria for the conference hosts. These questions are growing in volume as our hosts continue to harass local activists trying to draw attention to the country’s shocking human rights record.

The overly friendly registration staff at the IGF are members of a pro-government youth organisation and security is tight and formal. Yesterday, the IGF’s Secretariat attempted to prevent the distribution of two reports Searching for Freedom: Online Expression in Azerbaijan and The Right to Remain Silent: Freedom of Expression in Azerbaijan.

An IGF coordinator told a representative from the reports’ publisher Expression Online (a group of local human rights organisations including the Human Rights Club, the Azerbaijan Media Center and the Institute for Reporters‚ Freedom and Safety):

“You are not allowed to distribute these reports within IGF premises because the report was perceived by the Secretariat as an attempt to attack one of the stakeholder group”, that stakeholder being the government of Azerbaijan. The Secretariat staff suggested that the distributors of the report seek permission from the communications ministry to distribute the report saying: “If your government does not find the content insulting we will provide you with the booth and allow distribution of those two reports.”

While domestic NGOs are subject to strict rules preventing them from distributing literature, on Twitter #igf12 hashtag continual mention was made to Azerbaijan’s poor human rights record. There is a strange disconnect between domestic repression and a new found tolerance by the authorities for international criticism.

My visit to one of Baku’s Courts today brought home quite how autocratic the regime is. Journalist and editor Avaz Zeynalli has been held in prison since October last year on allegations of extortion made by a Member of Parliament, Gular Akhmadova (who has since resigned her seat after being accused of misconduct). Today Zeynalli and his lawyer Rashid Hajili (winner of Index’s law and campaigning award in 2010) were expecting a chance to cross-examine Akhmadova’s account.

Akhmadova failed to turn up at court. Zeynalli, held in a steel cage in front of the judges and surrounded by police, lost his temper. He has spent a year away from his family in detention. It was a scene that brought home the real Azerbaijan.

The prosecutor-general claims he has video evidence of Zeynalli threatening to publish defamatory stories about Akhmadova if he is not paid a bribe. However, the video has not been entered into evidence. Neither Zeynalli nor his lawyer have seen it; instead they have been given a written transcript of the alleged conversation. It’s evidence that falls short of judicial norms. When Zeynalli addressed the court, the prosecutor-general told the judge that the journalist was “repeating himself a lot for the internationals here”, referring to Index on Censorship, Human Rights Watch and Article 19, who were monitoring this trial.

The government of Azerbaijan makes much of the fact that local journalists and bloggers including Khadija Ismayilova (the victim of a viscious blackmail attempt) and Emin Milli (a former prisoner of conscience) can attend the IGF and criticise their government.

It’s worth noting that this is not normal. Nine journalists and three human rights defenders are currently in jail — most of their cases can be linked to criticism of Azerbaijan’s leadership. There are serious concerns that while local critics of the government are safe for the moment, when the international audience leaves Baku a series of prosecutions will follow. And it’s unlikely justice will be served.

Mike Harris is Head of Advocacy at Index, he tweets at @mjrharris

7 responses to “Letter from Baku”