Police in Kent, England have arrested a man after he posted a picture of a burning Remembrance Day poppy on Facebook. According to the Kent Police website, the man is being questioned on suspicion of “malicious communications”. 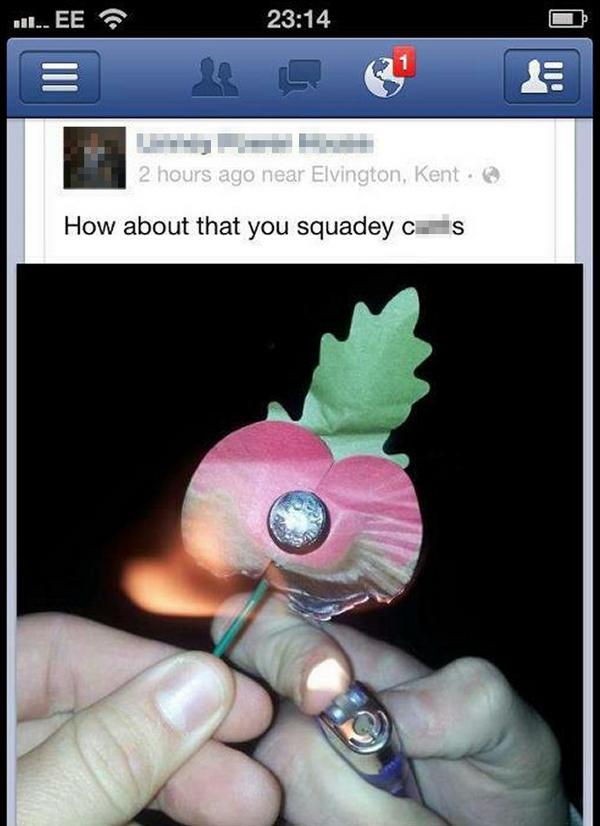 A man from Aylesham who was arrested after allegedly posting an offensive comment alongside a picture of a burning poppy on Facebook has been released on police bail pending further investigations.

Officers investigated after receiving a complaint about the posting on the social media website.

Following an investigation by Kent Police the 19-year-old man was arrested on suspicion of an offence under the Malicious Communications Act. He has been interviewed by detectives and released on police bail, pending further investigation.

Red poppies are worn on and before Remembrance Sunday in November, to commemorate those who died in war.

In March 2011, Emdadur Choudhury, a member of Islamist group Muslims Against Crusades, was convicted after burning poppies in public in London.

In March 2012, Yorkshire man Azhar Ahmed was arrested for a Facebook status update suggesting that British soldiers would go to hell.

This latest arrest comes as the Crown Prosecution Service is set to release interim guidelines for prosecution of offences on social media.

Read: Padraig Reidy on poppy burning and the invention of fetish