After the fall of dictator Muammar Gaddafi, Libya has seen a flourishing of new media outlets and NGOs. But two years on, the country still faces challenges to free expression, says Ghazi Gheblawi 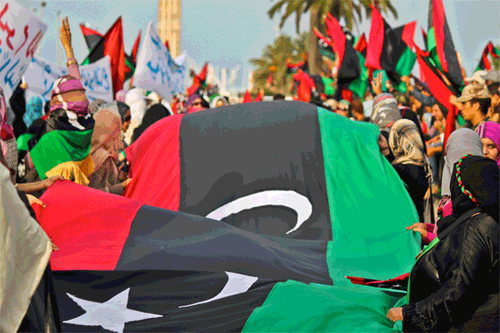 Free speech in Libya has been transformed in a relatively short period. The initial boom of diverse independent media outlets has been hailed by many observers as one of the major achievements of the Libyan uprising after decades of oppression on the freedom of ordinary people to voice their opinion and dissent.

However the initial euphoria gave way to frustration. It became apparent that developing laws and regulations that achieve the balance between freedom of speech and defamation will not be an easy task. Newly drawn restrictions to freedom when dealing with militant and fundamentalist armed groups and the religious establishment, combined with lawlessness of many parts of the country, is hindering the development of the concept of freedom of speech in post-revolutionary Libya.

In Gaddafi’s Libya, it was difficult for writers and journalists to work and publish outside the state-owned media outlets. Journalists faced banning, harassment, imprisonment, torture and death. Even when the regime attempted to improve its image, through Gaddafi’s son Saif-Islam, in what was dubbed the “Libya Tomorrow” project, the scope of freedom of expression didn’t go beyond criticising some corrupt state officials.

During the uprising independent media outlets became mostly synonymous with “resistance journalism” which focused mainly on rallying the people against the regime and documenting the many violations committed by Gaddafi loyalists.

The ability to write and publish without prior approval or censorship in newspapers, magazines, websites, or on social media was a huge leap for many writers and journalists.

The Libyan uprising produced, for the first time in many decades, hundreds of media outlets free from state control or official censorship. The state regulator and censor that was inherited from the Gaddafi era, and is yet to be dissolved, became an obsolete relic of a bygone age of oppression and censorship.

After the revolutionary fervour settled, and with the country entering a new era of rebuilding and establishing its state institutions, independent newspapers and publications found that adjusting to the new reality of post-revolution Libya wasn’t an easy task.

Many faced closure either because of lack of funding or a lack of professionally experienced journalists and writers to fill their pages, while dozens of television and radio channels found it difficult to attract audience with only revolutionary programming of discussion shows and nationalist songs, as is the case of the two state owned television channels, Al-Wataniya, and Al-Rasmiya that continue to fill their slots with irrelevant talk shows.

Protecting the rights of individuals to express their opinions peacefully and freely faced a challenge when the former National Transitional Council, bowing to pressure from certain exclusionary elements in the country, issued Law 37 to criminalise any “insult to the Libyan people and its institutions”, or glorifying Gaddafi and his regime, or any action that may harm the “Revolution” or Islam, was revoked by the Libyan supreme court and deemed unconstitutional, a decision that was supported and welcomed by many observers of freedom both inside and outside Libya.

In the post-uprising reality, newspapers and television channels that dared investigate claims of corruption and human rights violations, committed mostly by rogue militant and fundamentalist armed groups, face violent attacks; television channels have been vandalised, journalists kidnapped and tortured, or forced into silence or exile, and in some cases imprisoned and prosecuted under Gaddafi-era laws, as in the case of Amara al-Khatabi, who is accused of defaming Libyan judiciary after his newspaper published a list of judges it said were involved in corruption.

The other major challenge is enshrining freedom of expression in the constitution and protecting this right with laws that respect the rights of journalists and writers to report without fear. This could only begin by abolishing all Gaddafi era laws that infringe freedom of speech, some of which are still being used. It is expected that the long awaited constitution would protect freedom of expression and the rights of journalists and writers, and the arduous process of writing this constitution has begun with the members of the national congress (Parliament) to directly elect a 60 member constitutional committee that will be given the task of preparing the document, and is expected to be ready for a general referendum mostly by early 2014.

An official at the Libyan Ministry of Culture told me that the current government is aware of this problem and how old laws are being used to censor, ban and confiscate books, newspapers and other printed materials. But he said that changing these laws is not a priority as the government struggles to build state institutions from scratch.

The internet in general and social media in particular played an important role during the revolution, and it is still considered a major player in consolidating freedom of expression gains, and has so far not been censored or hindered except by its infra-structure which needs to be improved so it can reach more people in the country.

With the number of Facebook users in Libya approaching one million (862,060 according to Social Bakers, as of April 2013) many Libyans, are exercising their rights to criticise and debate any issues or figures in the government or other political elements, though some might argue that the lack of professionalism and accountability in social media is causing more harm than good, by spreading rumours and malicious reporting.

Libya ranked 131st in the World Press Freedom Index 2013, making the most gains in freedom compared to its Arab uprising neighbours, Tunisia and Egypt.

But the challenges ahead are daunting and the concerns that those gains can be lost are real.

Ghazi Gheblawi is a Libyan blogger, activist, author, and physician. He tweets from @Gheblawi