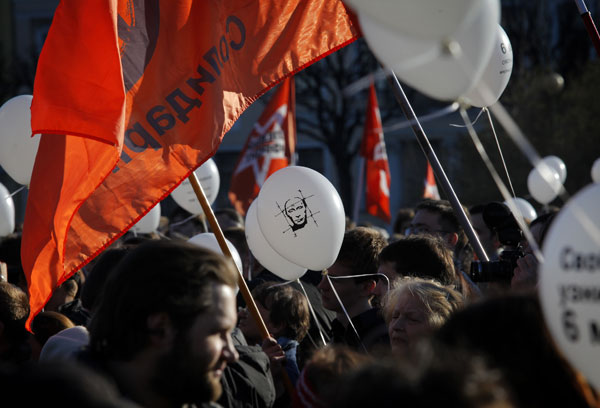 Russian opposition supporters gathered on 6 May to protest against Vladimir Putin and demanded the release of political prisoners. Photo: Elena Ignatyeva / Demotix

An organisation behind a nature reserve dedicated to the protection of Russia’s cranes has been ordered to register as “a foreign agent” under the country’s non-governmental organisation law. The case highlights how arbitrary implementation is chilling free expression in the country, Andrei Aliaksandrau reports.

The law was enacted by Russia’s Duma and signed by President Vladimir Putin in July 2012.  It requires NGOs receiving international funding to register with the government as a “foreign agent” and include that phrase in material they produce. The law also subjects registered NGOs to undergo financial audits and file twice-yearly reports on activities. Failure to comply leaves NGOs and staffers open to fines and possible prison time. The Putin government maintains that the law is intended to reduce external meddling in Russian politics, but opposition activists say that it is being used to suppress dissent.

The Muraviovka Park for Sustainable Nature Management — a non-profit studying the seven species of Russian cranes — was notified that it had to register under the law since it has received funding from outside Russia as part of several international environmental projects.  But Russian ecologists were surprised to learn the park is “a foreign agent” as politics has never been on their agenda.

This isn’t the first time cranes have become part of a political drama. In September 2012, Putin took to the air in a motorised hang glider to lead Siberian cranes on migration. But the current ruffling of feathers exposes the broad and vague definitions — like “political activity” — embedded in the foreign-agent law that allow arbitrary implementation.

Some take the warnings issued to Muraviovka Park and at least 39 other Russian NGOs as a sign that Russian authorities are continuing to wage a war against civil society.

The list of NGOs affected includes human rights groups, environmental organisations — and even an association of assisting cystic fibrosis patients. Many of the warnings stem from provisions in the organisations’ charters that suggest the NGO can represent their members at state bodies. These clauses are being interpreted as involvement in political activities by the government.

Cases have been already compiled against five NGOs. One of them, Golos (“Voice” or “Vote”), was found guilty of non-compliance with the law. The court decided it is a “foreign agent”, but failed to register itself as one. Golos was fined 300,000 roubles (about £6,250) and its leader Liliya Shibanova was fined 100,000 roubles (about £2,100).

The organisation denies the charges. It says staffers are not involved in political activity and  it has not received foreign funding. Golos was awarded the Andrei Sakharov Freedom Prize by the Norwegian Helsinki Committee, but returned the prize money. The association said it is going to appeal the court’s decision.

The foreign agents law is just one example of Russian legislative acts labelled as repressive by critics and free expression activists since Putin returned to the presidency. Laws have been enacted that create black lists of web sites dangerous to children, ban “propaganda of homosexuality”, recriminalise libel and restrict freedom of assembly.

Index and other observers note that the repressive legal framework seems to be the Putin regime’s response to growing voices of dissent to his autocratic rule. But civic activists have also faced physical violence as authorities in different regions act with impunity — taking their cue from Moscow’s increasing restrictions on free expression.

On 29 April police and private guards used force while dispersing local people protesting plans to build a power station in the town of Kudepsta, near Sochi, the site of the 2014 Winter Olympics. On 13 May officers of Patrol, a private security firm, severely beat members of a group protesting an allegedly illegal nickel mine near the city of Voronezh. One of the protesters was beaten unconscious and two more had their sculls broken. Police were present and did not intervene, according to activists.

Civil society in Russia is facing hard times — and expresses little optimism about the future.

“By about the end of the autumn there won’t remain a single independent NGO left in our country,” is a sad prediction made by Elena Panfilova, the head of Centre Transparency International – Russia, on her Facebook account. “In this NGOs issue, in the end there is a choice for everyone to make: either to close down one’s own organisation or to be prosecuted and face up to two years in prison. There are no other variants. Not for anyone. I think that not everyone understands this, but this is the bottom line.”

No word on what the cranes plan to do to comply with the law. Perhaps Putin can take to the air to show them the way to freedom.

One response to “Russian bird lovers targeted as ‘foreign agents’”