NEWS
Being a gay poet in Iran: 'Writing on the edge of crisis'

Not everyone is optimistic about the election of Iran’s new president. This article by Nogaam, a publisher of censored Iranian authors, explains why gay poet Payam Feili doesn’t share the optimism of his peers. 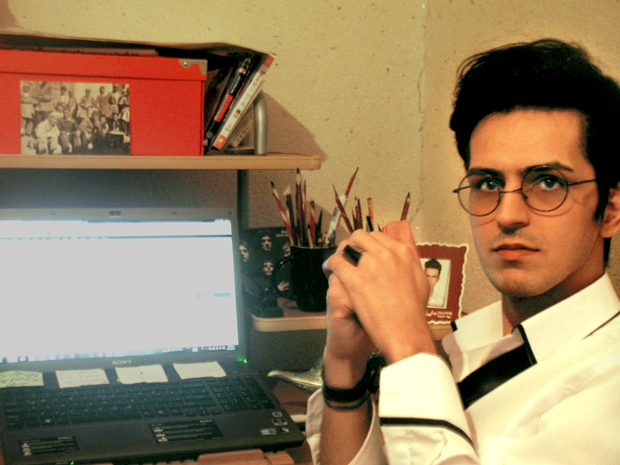 Iran’s government has been increasing pressure on writers and artists over the past few years, but its heavy hand does not strike evenly.

Iranian poet Payam Feili, who is a gay man, is the victim of a brutal system. He was fired from his job, his translator’s house was ransacked, and the censors have shunned him.

Isolated in Iran, Feili has dedicated himself to writing. He says he lives among his ideas, a citizen of his mind: “I’m writing on the edge of crisis but I think I am doing fine. I’ve gotten used to life being full of tension, horror, disruption and crisis”.

Born in 1983, in Kermanshah, a city in western Iran, Feili has faced insurmountable obstacles as an author who, with pen as sword, is fighting back against social, cultural and political taboos. Despite the endorsement of renowned Iranian Simin Behbahani and the backing of one of Iran’s biggest publishers, Feili’s work has only once emerged from the Ministry of Culture and Islamic Guidance with a seal of approval.

Feili’s first book, ‘The Sun’s Platform’, was published in Iran in 2005, but dozens of other works submitted to the ministry have been refused publishing permission. Payam is blacklisted, not just for his words, but for his sexual orientation.

“They refused my books, one after the other, without any explanation. They have a blacklist of authors who are simply not allowed to publish anything. Even my apolitical non-religious works, works of pure poetry, were banned. There’s nothing scary about them, but the state authorities are afraid of everything”

Observing his sharply delicate words falling from the pages of history unread, Feili began publishing his books outside Iran, knowing all too well that he was endangering himself. Officers from the Ministry of Intelligence ransacked his translator’s house and threatened him, forcing him to sever ties with Feili. After gaining notoriety abroad, the company Feili had worked for fired him without good cause. With the odds stacked against him, Feili insists on exercising his right to freedom of speech.

“If you read my books, it’s obvious I have not succumbed to self-censorship. My poems are bold and fearless. I don’t allow anybody, not me, not others, not even the Ministry of Culture and Islamic Guidance to censor my books”

Many are hoping for Rouhani’s presidency to bring around the cultural thaw that characterised Khatami’s two terms. Feili has not been swept up by the wave of hope that has captured his peers.

“Nothing essential has changed. The structure is still the same. It’s a play, a comic and ugly performance. They’re relying on the naivety of people to be able to succeed”

Embittered by 30 years of living in exile within the borders of his country, as a homosexual, and as a writer that challenges the status quo, Feili is now dedicating his time to securing funding to translate his poetry for audiences outside Iran.

“I’ve learned a lot and I know what’s going on in Iran. I know that when my homosexual narrative is woven through my words and there is a Star of David on the cover of my book, the censors won’t even bother opening it to find out what is inside. I just want to be published. I know the audience outside Iran is different, but I just want to be heard”.

This article was reported by Nogaam, a publisher of Iranian books and authors that have been censored, banned or blacklisted. Nogaam relies on donations from readers to publish their books for free download on their website. Payam Feili’s book ‘White Field’ was first published in Persian by Nogaam in London in July 2013. The publisher is currently seeking support to help Payam translate his poems, and fulfil his simple goal of being heard.

I Will Grow, I Will Bear fruit … Figs (First Chapter)

I am twenty one. I am a homosexual. I like the afternoon sun.

My Apartment is in the outskirts of town. Near the wharf. In a place that is the realm of seashells, the realm of corals, adjacent to the eternal sorrow of the turtles.

My mother lives in the waters. In the remains of an old ship. On a bed of seaweed. Her hair blazes like a silver crown above her head. My mother is always naked. She visits me every now and then. At my apartment in the outskirts of town.

She first crosses the wharf. She floats in the scattered scents of the bazaar. Then she pays a visit to the crowd of fishermen in the seaside cafés. Among their wares, a hidden pearl. And she leaves them and heads for my bed. Of course, along this entire route, she is no less naked.

Poker; that is what I call him. He is my only friend. We met during military training. He is twenty-one. He likes the afternoon sun and he is not a homosexual.

I consider this a threat. I have never talked to anyone about my sexual inclination. In fact, I hide it. Even from my few sexual partners. With them, I pretend it is my first such experience.

Translated from the Persian by Sara Khalili | This translation appears on Feili’s blog.