NEWS
Azerbaijan locks up journalists as it prepares for "election"

In the run-up to next week’s presidential elections, Index on Censorship travelled to Baku to meet journalists, human rights defenders, political activists, and citizens. 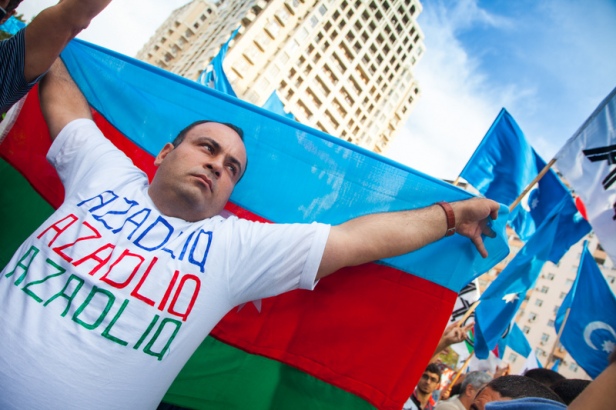 The tone was set the day we arrived in Azerbaijan, 17 September 2013. Journalist Parviz Hashimli, was arrested and detained by officers of the Ministry of National Security after a raid on the office of newspaper Bizim Yol.

Hashimli is an influential journalist as the editor of Moderator.az website and chair of the Center for Protection of Political and Civil Rights. He was accused of drugs smuggling and the illegal possession of weapons. According to the Institute for Reporters’ Freedom and Safety (IRFS) in Baku, “it is unclear exactly what prompted the arrest of Hashimli and raid on BizimYol newspaper. However, some experts believe it was linked to a series of leaks reporting on developments in the state machinery, published shortly before his arrest on www.moderator.az news source.”

Human rights activists that we met believe that Hashimli’s arrest is yet another attempt to intimidate the press in the run-up to the October election. This week, the editor of Tolyshi Sado newspaper, Hilal Mamedov, was sentenced to five years in prison.

At least eight journalists are currently imprisoned in retaliation for their reporting on sensitive issues. This is the backdrop to Azerbaijan’s election next week, an election that is being fought in one of the least free countries on earth.

Journalists are not the only group affected by arrests under fabricated charges. Youth movements have been particularly targeted since March 2013. Index met with relatives of some of the seven NIDA members arrested last March and April for “drug possession” or “suspicion of inciting violence”. NIDA is a youth movement calling for more democracy in Azerbaijan. The seven members arrested were particularly active on social media and known for their criticism of the authorities.

On 19 September, we met former Index on Censorship award winner Rashid Hajili, who is a lawyer and chair of the Media Rights Institute. “Since 2003, the situation has gradually worsened,” says Hajili. While the human rights situation is deteriorating on the eve of the presidential elections, Hajili sees the situation as the result of a decade-long “shift toward authoritarianism”. Not only have the authorities of the country ignored their international commitments – such as decriminalising defamation – but they have adopted legislation imposing new restrictions on fundamental freedoms. 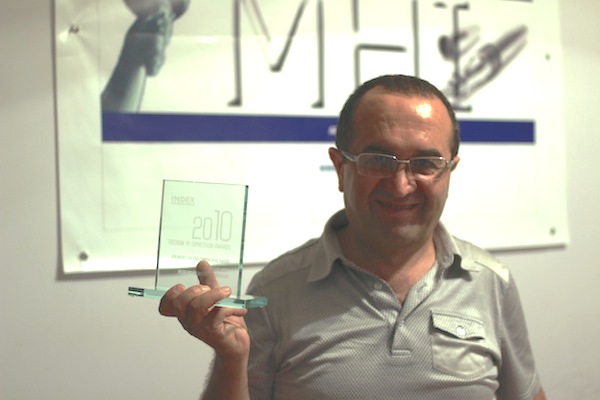 In May, Azerbaijan’s parliament adopted regressive legislation extending criminal defamation provisions to online content. Azerbaijanis now face potential fines of up to AZN 1,000 (approximately USD $1,280), or prison sentences of up to three years for items they post online, including on Facebook. The chilling effect is so severe that individuals refrain from even “liking a friend’s controversial status”, says a young Azeri. “We are aware that social media are monitored,” she adds.

As the Aliyev regime tightens the screws, space for free expression is shrinking and prospects for free and fair elections grow slimmer. Three years after receiving Index’s Law and Campaigning Award, Rashid Hajili is still busy fighting repression against the right to freedom of expression in the country. The number of his clients prosecuted for being critical to the government keeps increasing. “There is very limited space for free expression,” says Hajili. “Many independent or critical voices go online, to online newspapers and to social media”. But the online space is not safe. While many in the civil society or international diplomacy have denounced criminal prosecutions for online publications, and intimidation of journalists, Azerbaijan routinely ignores criticism of its human rights record by international bodies.