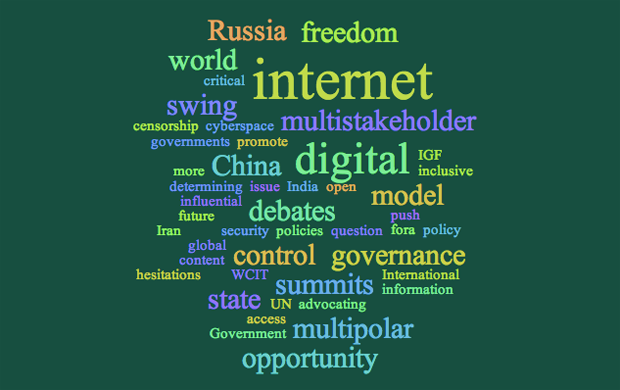 International summits and fora over the next two years will be critical in determining the internet’s future. The open and inclusive multistakeholder model of internet governance has been called into question, with some governments – namely China, Iran and Russia – advocating for more control. As an influential state in our increasingly digital and multipolar world, India has the opportunity to push policies that promote digital freedom. Yet, India is still very much a swing state in these internet governance debates.

After initial scepticism, India has now joined the European Union (EU) and the US in resisting the call for a top-down government-led approach for global internet governance. At the World Conference on International Telecommunication in Dubai in December 2012, India was one of the few countries to side with EU member states and the US in supporting the current multistakeholder status quo. This was the result of a debate in India, in which the key battle line was whether internet freedom constituted a daunting threat to security that required top-down national control or not.

India’s hesitation increased after the 2008 Mumbai attacks when Jaider Singh, Secretary of the Department of Information Technology, described the internet as “both a vehicle and a target of criminal minds”.[49] Concerns over security and spam led India to advocate for more national control over internet governance, through the creation of a United Nations committee.[50] Earlier in 2011 at the Internet Governance Forum in Nairobi, India, along with South Africa and Brazil – two other crucial swing states in the internet governance debate – proposed a similar initiative.

While such top-down control has long been advocated by the likes of China and Iran – countries with a poor domestic track record on digital freedom – it is a direct threat to internet openness and the exercise of human rights online by placing too much control of the process in the hands of national governments. The EU and US tried to address India’s concerns diplomatically by agreeing to a working group.

It is positive that India is now willing to play an important role in defending the multistakeholder model of internet governance against calls for more top-down state regulation. Yet, it is clear that with a sixth of the world’s population, it is not just important for India’s government to defend internet freedom globally, but also ensure that its domestic record stands up to scrutiny and is a model for the rest of the world to adopt. Currently, this is not the case.

India is not only setting internet policies for its 10 percent of users today, but for its 1 billion citizens yet to come online. The decisions it makes, both domestically and on the international stage, are likely to set powerful precedents for regional neighbours, and other emerging democratic powers.

[50] In 2011, India proposed a United Nations Committee for Internet-Related Policies (CIPR) be established to develop and oversee internet policies that would affect the world’s users. Techdirt, ‘India Want UN Body To Run The Internet: Would That Be Such A Bad Thing?’ (2 November 2011), http://www.techdirt.com/articles/20111102/04561716601/india-wants-un-body-to-run-internet-would-that-be-such-bad-thing.shtml accessed on 2 September 2013.