NEWS
David Satter: US journalist expelled by Russia speaks to Index on Censorship 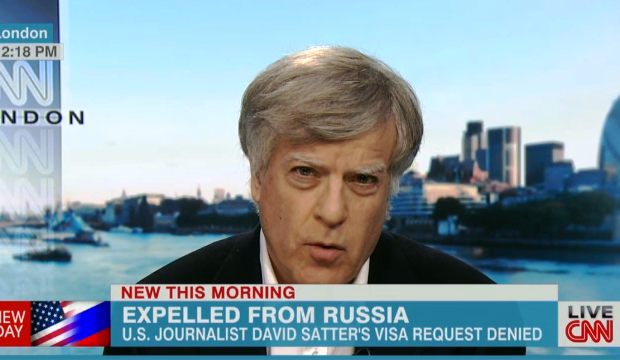 Fielding calls in the back of a London black cab, American journalist David Satter is a busy man.

Satter, who has reported on Soviet and Russian affairs for nearly four decades, was appointed an adviser to US government-funded Radio Liberty in May 2013. In September, he moved to Moscow. But at Christmas, he was informed he was no longer welcome in the country — the first time this has happened to an American reporter since the cold war.

Since Monday night, when the news of his expulsion from Russia broke, he’s been talking pretty much non stop, attempting to explain the manoeuvres which led to him being exiled from his Moscow home.

A statement issued by the Russian foreign ministry claims that Satter had violated Russian law by entering the country on 21 November, but not applying for a visa until 26 November.

Satter dismisses this as “nonsense”, saying he had been assured that a visa that had expired on 21 November would be renewed the following day, with no gap. As it happened, the visa was not renewed on time, “in order to create a pretext”, he tells Index.

To cut a short cut through a labyrinthine tale of bureaucracy: Satter says he left Russia in order to gain a new entry visa, which he could then exchange for a residency visa as an accredited correspondent for Radio Liberty.

He was repeatedly told this visa had been secured. Eventually, on 25 December, he was told that he had a number for a visa, but not the necessary invitation to accompany it. “Kafkaesque”, he calls it. The embassy official had never heard of this happening before. And, as Satter points out, he would not have been issued a number for a new visa in December if it had not been approved.

Eventually, he was told to speak to an official named as Alexei Gruby, who told him that “the competent organs” (code, Satter says, for the FSB) had decided that his presence in Russia was not desirable, language normally reserved for spies. “And now we see I have been barred for five years.”

“The point is, I urge you not to get caught up in their bureaucratic intrigues…the real reason was given to me, in Kiev, on 25 December.”

Is this just another example of FSB muscle flexing?

“Possibly. I’ve known them for a number of years, and I can’t always understand what they’re doing. Usually what they do is not very good…”

This is not Satter’s first brush with the Russian secret services. In a long career with the Financial Times, Radio Liberty and other outlets, he has experience of the KGB and its sucessor. “In 1979, they tried to expel me, accusing me of hooliganism. They once organised a provocation in one of the Baltic republics in which they posed as dissidents. I spent a couple of days with them, thinking I was with dissidents – I was really with the KGB. It’s a long history. It’s in my movie. We showed it in the Maidan [December’s anti-government protests in Ukraine]. Maybe they didn’t like that.”

Satter’s film, the Age of Delirium, is an account of the fall of the Soviet Union.

Is this expulsion a personal thing? Or a move against Radio Liberty? “It’s hard to say whether it’s me, or Radio Liberty, or both.”

Satter is concerned at leaving behind research materials and belongings in Moscow, saying it is likely his son, a London-based journalist, will have to go to Russia to collect them “unless they reverse their decision, which I hope they do”.

In spite of the recent amnesty that saw Pussy Riot’s Nadezhda Tolokonnikova and Maria Alyokhina released from prison, as well as opposition figure Mikhail Khodorkovsky, the diagnosis for free speech in Russia is not good. Alyokhina dismissed her release as a “hoax”, designed to prove Putin’s power. Meanwhile, state broadcaster RIA Novosti has been dissolved and reimagined as “Rossia Segodnya” (“Russia Today” – no coincidence it bears the same name as the notorious English language propaganda station), with many fearing closer Kremlin control.

One Russian journalist I spoke to felt that, ahead of the Sochi games, the expulsion of Satter is a message to all journalists: no matter how experienced, well-known, and well-supported you are, you are still at the mercy of the authorities.