Erdogan’s “Orwellian” 5651 legislation has been no exception 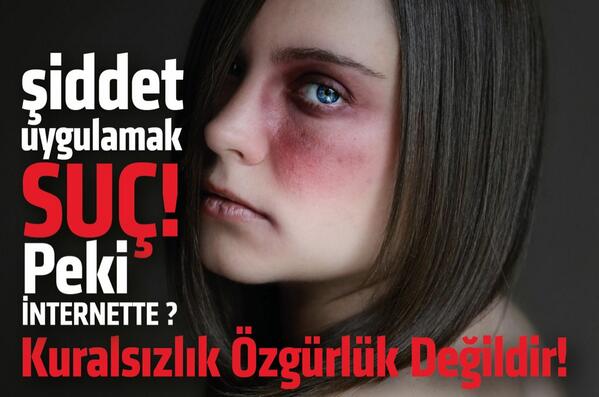 Over the past few weeks, the ruling Justice and Development Party (AKP) in Turkey has deployed a curated mix of paid-for advertising, op-eds in pro-government newspapers, tweets and off-the-cuff press statements to justify their curbs on internet freedom.

Tweets from AKP deputy Necdet Unuvar (“Today is safer Internet day, they used to call this a censure but they do not anymore,”) and another deputy, Cevdet Erdol, (“All forms of addiction: tobacco, drugs, alcohol, weed, Internet whatever they might be, we continue our struggle against them. For our kids“) sought to conjoin 5651 censorship with AKPs conservative, quasi-religious philosophy: As one analyst translated it “high moral laws: morals to protect the youth.”

The AKP also launched a paid-for advertising campaign: A bruised woman, clearly the victim of domestic violence, with the strapline “Violence is a crime. What about the Internet? Absence of rules does not mean liberty!”

Internet commentator Glyn Moody, who blogged about the bizarre campaign for Techdirt, told Index on Censorship “This extraordinary ad belongs to a tradition of regarding the online world as a kind of lawless “Wild West,” that needed to be tamed.”

Erdogan has also been keen to draw comparisons internationally. On the same day as 2000 protesters clashed with water-cannons in Istanbul, he told a journalist working for Al Jazeera TV network “Turkey is almost more free than some states of the European Union.” He justified his claim: “When you refer to the Gezi Park events, why do you not see the events in Frankfurt, Hamburg? Have you seen what the police did there? Why do you not see [sic] what happens in England?”

Prosecutors in Germany and England were accused of being heavy-handed after protests and street unrest in Frankfurt, Berlin and London in 2011 were met with long jail sentences.

Bulent Arinc has also argued, that Turkey is “freer compared to many other countries,” and “has freedom of the press,” although a week later international NGO Reporters Without Borders  slammed the nation in a global survey of journalistic freedoms, ranking it 154th globally.

Pro-government newspapers have even posited a slightly dubious economic argument : Sabah, a daily newspaper considered very favourable towards AKP, argued that Silicon Valley giants would be keener to participate in the Turkish market as the legislation removed prison sentences in favour of punitive fines.

So did all this work? It depends on how you judge success. Emre Kizilkaya, a Turkish journalist, sees censorship as a partisan issue anyway.

“Most AKP voters support it, while almost all opposition voters are against it. So, it has become a partisan issue. As such, the PR campaign probably didn’t swing votes – but it further cemented the position of AKPs own voters.”

Pinar Tremblay, a Turkish analyst and academic, thought understanding of the laws was limited. “The majority of the people are not yet aware what the law entails, because they have not yet experienced it.”

“No matter what the government may say about protecting children or stopping violence against women through censorship,” said Gurkan Ozturan, a citizen journalist and blogger based in Turkey. “everybody knows that those issues are not being addressed to in real life, physically on the street.”

He goes on “This bill has been prepared to re-initiate the government of fear in Turkey. But as with OccupyGezi protests the people have passed beyond the fear-threshold.”

If polling data is to be believed, the AKP now commands 40-50% of Turkish approval ratings. But 5651 has provoked intense street protests, condemnation from human rights groups, and even comparisons with the early days of the Third Reich.

The passing of the legislation provoked half a million tweets, according to media reports, split across English and Turkish hashtags. The pro-censorship hashtag received a handful in comparison.

Still, President Gul – who still needs to ratify the bill, has indicated he will. Turkey is going dark, soon.