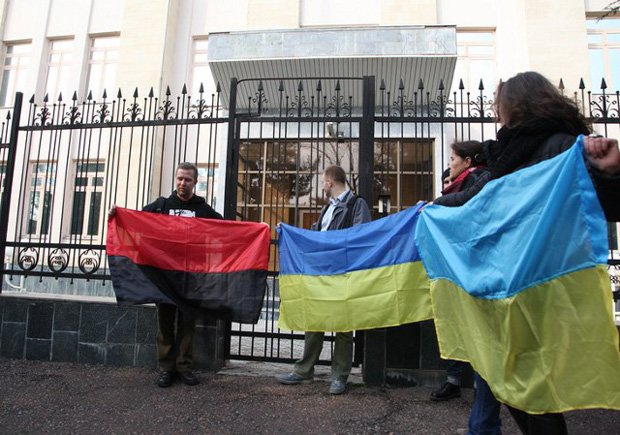 Umida Akhmedova took part in a small protest in Tashkent, in solidarity with the Euromaidan movement.

On 27 January, internationally renowned photographer Umida Akhmedova, her son Timur Karpov and seven other people took to the streets of Tashkent, Uzbekistan. Armed with Ukrainian flags, cameras and a petition, they staged a peaceful protest in solidarity with the Euromaidan movement.

Knowing they might attract unwanted attention, the group, which included one journalist reporting, posed for a few photos outside the Ukrainian embassy, handed over the petition, and quickly wrapped up the demonstration. However, their worries soon proved valid. Three days later, the protesters were hauled in one by one by police for a “short talk”. They would be held incommunicado for one day, first in a central Tashkent police station and later at a more remote location.

Karpov, a photographer based in Russia, told Index about unprofessional and aggressive officers, who called the protesters “dissidents” who were “ruining the constitution”. Passports and phones were taken away, but Karpov managed to keep one concealed to alert the outside world to their detention. It was eventually discovered and confiscated. When he got it back, it had been completely wiped. Without access to lawyers, the protesters were questioned by the SNB — the KGB’s successor — before being put through a quickie court session and ordered to pay fines of some £1,200. Three of them have been sentenced to 15 days in prison. Justice, as understood by Uzbekistan’s notoriously repressive regime.

This is not the first time Akhmedova has run into trouble with the regime of former Communist Party official Islam Karimov. In 2009, the photographer and documentary film maker, whose work has been published in The New York Times and Wall Street Journal, was charged with “damaging the country’s image” over a series of photographs depicting life in rural Uzbekistan. Similar charges were later levelled at her over a film about challenges facing Uzbek women, and in 2010, over a book about Uzbek traditions. It’s worth noting that she never intended to make a political statement with her work — the authorities’ reaction is what has politicised it. The cases have made Akhmedova a credible voice of opposition, and while her high profile provides some protection, it also means her every move is noted — as the latest case shows. 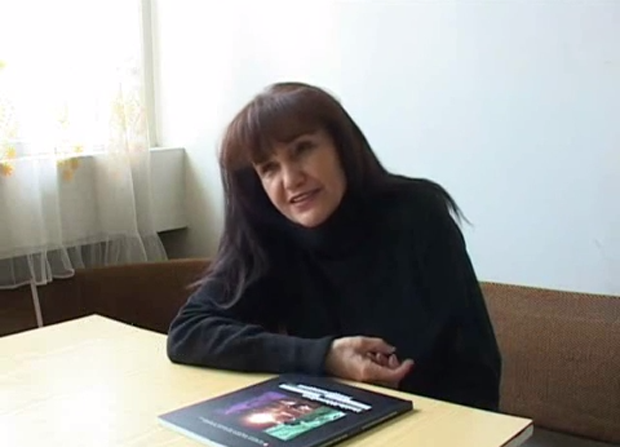 “We live in a strict, archaic society, where all unregulated acts, especially those that can cause some kind of a response in the society, are nipped in the bud,” she told Index. “In the case of our Maidan project, the authorities did not have to be clairvoyants to see the similarities between the situation in Ukraine and the one in Uzbekistan. The government has started scaring children and adults with the word Maidan and did not like it when we showed support for Maidan.”

“As for our previous case,” she adds “we were charged with slander and insult of Uzbek nation, because the government wanted to teach us a lesson that without the approval from above, we were not allowed to film anything or publish books, or generally, do anything artistic without a superior permission.”

While Akhmedova’s latest arrest hit headlines across Central Asia, the story made little impact in the west. This is not surprising. Earlier this year the soap opera-like falling out between first daughter Gulnara Karimova — businesswoman, sometimes pop star, and until recently tipped to follow in her father’s presidential footsteps — and, seemingly, the rest of the family was covered by media outside the country. But on the whole, Uzbekistan rarely commands international attention. Like many other countries in the region, it is able to carry out its repressive rule away from the global spotlight.

President Karimov, by taking a number of liberties with the country’s constitution and term limits, has been in power since it gained independence from the Soviet Union in 1991. Reports of torture and other power abuses are widespread, the darkest days of the regime coming with the Andijan massacre, where security forces killed hundreds of people in the aftermath of a peaceful protest. The country is also one of the most corrupt in the world and despite its gas resources — part of the reason for many western sanctions quietly being dropped — suffers “recurring energy crises“. But Karimov has been careful to remove nearly all institutions that might use this information to challenge his power. Uzbekistan has no official opposition parties and no press freedom to speak of. Opposition news sites that operate outside of the country are blocked. Karpov puts it simply:  “There is no freedom of expression in Uzbekistan. Absolutely none.”

One aspect of the widespread press censorship, is that developments in Ukraine have been met with near media blackout in Uzbekistan — the same way authorities dealt with the Arab spring and other incidents of popular unrest outside the country’s borders.

“From my point of view, they’re afraid. Extremely afraid of any sort of freedom,” says Karpov. ” That’s why they made the case with us. To frighten us. To show to other people that if you do this, you will be sentenced.”

Mother and son have accepted their punishment — partly because refusal to do so would lead to further blacklisting, and partly because they weren’t alerted to their appeal until after it had taken place. Unsurprisingly, the sentences were not overturned.

Despite this latest setback, and the possibility of being handed down a travel ban, Akhmedova remains undeterred. “Nothing has changed for me. I will carry on ‘slandering’ as I have done,” she says. “The state cannot help or stop me.”