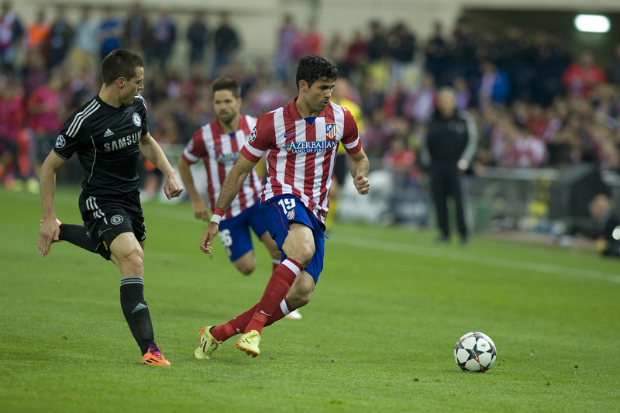 Atlético Madrid are the toast of world football fans at the moment. They’re having possibly their greatest season ever, qualifying for the Champions’ League Final and looking set to break the Barcelona/Real Madrid duopoly over Spain’s La Liga.

Sports fans love nothing more than an underdog story, and the Atlético one feels just right. Always the less glamorous team in the Spanish capital, they’re finally having their time in the sun. Only a complete killjoy would rain on the parade of super striker Diego Costa and his team mates.

Atlético’s shirts bear the advertising slogan “Azerbaijan: Land of Fire”. They are sponsored by the government of Ilham Aliyev, a man who combines the callousness of the classic dictator with the appearance and language of an aspiring sales executive who’s read one too many management manuals. His Twitter page bears the fascinatingly banal phrase: “We turn initiatives into reality.” I have absolutely no idea what that means (suggestions in the comments, please). Whatever it does mean, he’s clearly quite pleased with it, as it pops up regularly on his website.

The deal (sorry, “strategic agreement”) with Atlético came about in December 2012, and was renewed in March 2014.

The explanatory blurb on the Atlético website is packed with more nonsense of the “initiatives into reality” variety.

Atlético is not a football club, it is a “sports entity”.

“The link between Azerbaijan and Atlético Madrid,” we are told, “is much more than a traditional commercial sponsorship associated with a shirt sponsorship, because it has atremendous value, as the tool to achieve important goals, through actions of a different nature, sports, commercial, communication, marketing and corporate social responsibility for the benefit of all parties.”

This is almost poetic in its nonsense; in fact the “actions of a different nature, sports, commercial, communication, marketing and corporate social responsibility for the benefit of all parties” brings to mind no less literary masterpiece than Lucky’s monologue in Samuel Beckett’s Waiting for Godot: “…the practice of sports such as tennis football running cycling swimming flying floating riding gliding conating camogie skating tennis of all kinds…”

All this would merely be amusing if Aliyev was, say, head of a fleet car dealership in Runcorn. Unfortunately, he’s not. He’s the autocratic head of a regime bloated on oil and gas revenue that is engaged in an enormous whitewashing exercise composed of equal parts propaganda and censorship.

The censorship bit is rather less fun, as a search on the Index on Censorship website will quickly reveal.

There is the case of journalist Khadija Islamova, harassed and blackmailed by the authorities; Index on Censorship award winning newspaper Azadliq, threatened with financial ruin deliberately brought about by state agencies; Idrak Abbasov, brutally assaulted for daring to report on demolitions of houses by the state oil company. There is also Rafiq Tagi, a murdered columnist whose killer has never been brought to justice; dissident “Donkey bloggers” Adnan Hajizade Emin Milli, imprisoned for hooliganism after going to the police to report that they had been assaulted; reporter Eynulla Fatullayev, jailed for four years, and hit with false drug charges; critical journalist Elmar Huseynov, murdered in 2005.

Are these victims of Atlético Madrid? No, it would be unfair to say that. For a start, Atlético are not the only club to benefit from shirt sponsorship from dubious regimes; Barcelona, with their smug “més que un club” image, ditched UNICEF from their jerseys to sign a deal with Qatar, a country that locks up poets, for God’s sake. No one blames Lionel Messi for the fate of Mohammed al-Ajami.

Nonetheless, Azerbaijan’s deal with Atlético is one side of Aliyev and his cronies’ colossal image management exercise; and the imprisonment of critical reporters, bloggers and activists is the other. They cannot be separated entirely.

We should enjoy the football and praise the players, but we owe it to brave determined Azerbaijainis to ask some tough questions of Atlético’s officials, even as they celebrate.