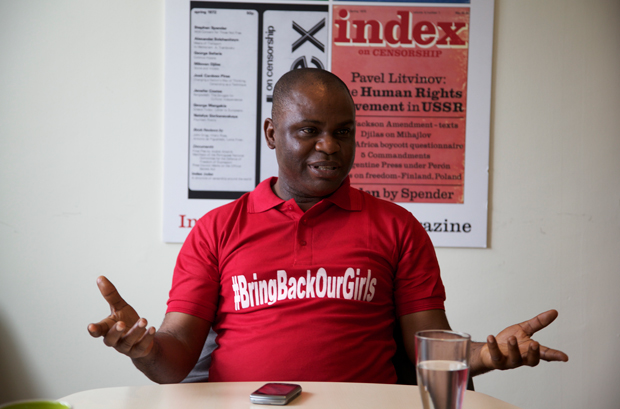 The wording of Nigeria’s recent anti-gay marriage law is misleading and has provoked a spike in hate crime towards the homosexual community, according to leading human rights lawyer Rommy Mom. The Same Sex Marriage Prohibition Act 2013, which is yet to be published since it was signed into law by President Goodluck Jonathan in January, outlaws gay marriage and relationships. It also makes it illegal for gay people to hold meetings, and outlaws the registration of homosexual clubs, organisations and associations. Those found to be participating in such acts face up to 14 years in jail.

Mom, who was nominated for the Index Freedom of Expression Advocacy Award for his work with Lawyers Alert, visited the Index office to speak about the current situation in Nigeria and the problems facing the LGBT community. “When the title is ‘Same Sex Marriage’ it’s not something many people are able to wrap their heads around…what it has done is to stir up some hate crimes against persons of different sexual preferences,” explained Mom. At the same time, the public are failing to take note of the other implications of the law to homosexuals hidden behind the title.

Mom referred to an attack on a group of at least half a dozen young men in a village on the outskirts of capital Abuja recently after the law was passed.  The men, dragged from their homes in the middle of the night by villagers, were assaulted and battered, before the local police detained them. “We have a constitution where people are innocent until proven guilty,” Mom told Index, but that wasn’t the case here, and hasn’t been in many other recent cases.

But why has one word — “marriage” —  resulted in an increase in violent crimes against the LGBT community? As Mom explained, the idea of same-sex marriage is a very Western notion (although, as he pointed out, only 19 states in America have legalised the act of civil unions) and is something the Nigerian people are uncomfortable with.

While same-sex marriage was not legal prior to the law coming into force, in some Nigerian cultures, including that of the Igbo people, women have been marrying other women for centuries for the benefit of their husbands — be it for economic or reproductive reasons. “It’s a situation that before now wasn’t there. Sexual differences have always been with us in Nigeria, we’ve lived with it and we’ve accepted it. It might come with some social stigma but people were not going out of their way to want to harm [homosexuals] or to incite hate,” Mom said.

“People have died because someone has labelled them a lesbian or a gay. But that’s what the law has cost in Nigeria.”

This article was originally posted on May 30, 2014 at indexoncensorship.org

One response to “Rommy Mom: Nigeria’s gay marriage law is misleading and harmful”