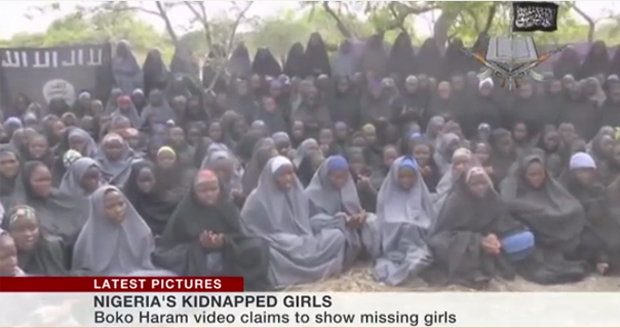 The Nigerian government has faced criticism over their crackdown on Boko Haram, the terrorist group among other things responsible for the recent kidnapping of around 276 school girls from Chibok in Borno state. The efficiency of the state’s strategy, which has included extrajudicial executions, mass imprisonments and indiscriminate targeting of any young Muslim Nigerian who might fit the profile of a Boko Haram member, has been questioned — and the “war on terror” has also been used to target the country’s journalists.

In the first half of 2013, according to Amnesty International, over a thousand detainees, many of whose affiliation with Boko Haram was never confirmed, died in police detention. The human rights organisation has condemned the government’s crackdown. Borno, Yobe and Adamawa states were put under a state of emergency, countless homes, businesses and mosques were raided, and thousands of men and boys were arrested, loaded into trucks and thrown in prison. According to many of their families, the arrests have been indiscriminate.

In 2009, Nigerian police claimed the killing of Mohammed Yusuf, the leader of Boko Haram at the time. The government said Yusuf, who was blamed for violence that killed hundreds of people in northern Nigeria, was shot dead following his capture. The official line was boldly unrepentant about the lack of judicial process. “He has been killed. You can come and see his body at the state police command headquarters,” said Isa Azare, spokesman for the police command in the northern city of Maiduguri.

In 2010, footage obtained by Al Jazeera showed deceased and unarmed Boko Haram prisoners who appeared to have been killed by government troops after “crackdown” fighting had ended. Elements of the police and army reportedly staged a follow-up operation in which house-to-house searches were conducted and individuals were apparently selected at random and taken to a police station.

The efficiency of the government’s strategy to eliminate Boko Haram has been severely questioned by security experts.

“So many young men were killed and beaten in the crackdown against Boko Haram,” said Virginia Comolli, Research Fellow for Security and Development at the International Institute for Strategic Studies, “ that police or soldiers might have developed sympathies for the group, if one of their relatives was caught up in this.”

“You wonder whether there could be complicity,” Comolli speculated.

Bala Liman, a PhD candidate at School of Oriental and Africa Studies in London and an expert on Boko Haram, pointed to further flaws in the crackdown. “Look at the $8 billion which was provided to the security forces in 2011,” he said, “most of the money was lost to corruption rather than going to fight Boko Haram. Most of the soldiers I speak to nowadays are still under-equipped.” With corruption so widespread, Liman also suggested that bribery could have been a motivation behind collusion with Boko Haram.

While international observers may have the luxury of pointing out the fallacies in such a brutal crackdown, as well as corruption (or sheer incompetence) amongst the police and military, Nigerian journalists do not: Security agents have abused the pretext of their own “war on terror” to threaten, harass, arrest, detain, and seize the equipment of local reporters.

In one case in December 2013, security forces assaulted broadcast journalist Yunusa Gabriel Enemali on the pretext he was a Boko Haram suspect, after he took photographs of a policeman demanding a bribe. “I was fortunate to come out alive,” Enemali told the Committee to Protect Journalists at the time.

In December 2012, the State Secret Service (SSS) unlawfully detained and seized the equipment of Aliyu Saleh, a reporter with the weekly Hausa-language Al-Mizan newspaper, and Musa Muhammad Awwal, the paper’s editor, allegedly over a story questioning the government’s extra-judicial imprisonment of people in Northern Nigeria.

Peter Nkanga, the Commitee to Protect Journalist’s West Africa correspondent, told Index on Censorship: “Awwal was twiced arrested and on both occasions had his equipment seized by the State Security Service. It is now over a year ago yet the SSS have refused to return his two laptops and two phones, alongside five other phones seized from his wife and children.”

Journalists covering protests since the kidnap of the Chibok schoolgirls have also been targeted. Hir Joseph of the independent Daily Trust newspaper was arrested on 9 May after he wrote a story detailing how female police officers and other security officers had joined with protesters calling on the government to do more to rescue the girls.

“Joseph refused to disclose his source for a story,” Nkganga told Index. While in custody, two police officers kicked Joseph, locked him in a cell “with hardened criminals” and was also told to simulate sex with a wall while being interrogated. The police charged Joseph in court on 12 May, accusing him of publishing “injurious falsehood”. Joseph pleaded not guilty and the case has been adjourned to 19 June. He faces up to two years imprisonment if convicted.

“Targeting a journalist for reporting on issues of public interest,” says Nkganga, “is tantamount to deliberately denying the public the right to be adequately informed about issues affecting their commonwealth. This is an attack on the society. By extension, this goes against the freedom of expression Nigerians are universally and constitutionally guaranteed.”

This article was posted on June 3, 2014 at indexoncensorship.org