Since its launch at the end of May, over 170 cases have been submitted on the media freedom crowd-sourcing platform promoted by Osservatorio Balcani e Caucaso and Index on Censorship. 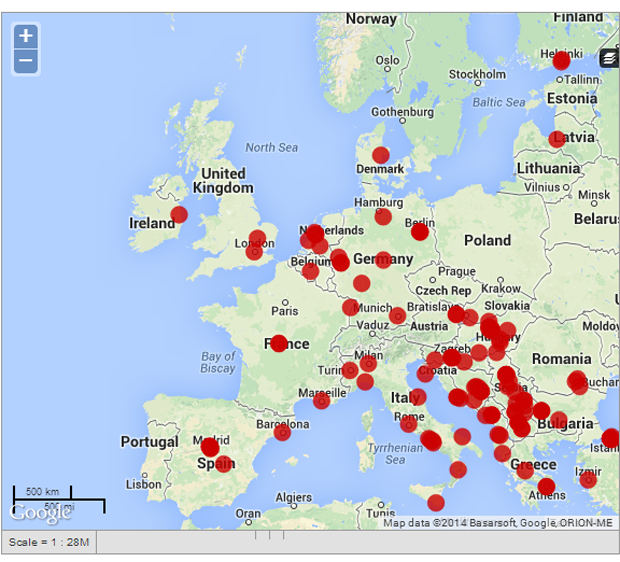 Over 170 cases have been submitted on a new media freedom crowdsourcing platform since its launch in May, while about half of the mapped cases of censorship and violations that spread in all 28 EU member states and candidate countries occurred in southern and southeast Europe.

Mediafreedom.ushahidi.com is a website that enables media professionals and citizen journalists to report and map media freedom violations across the 28 EU member states plus candidate countries. Ushahidi means ‘testimony’ in Swahili. Single cases can be uploaded through direct reporting on the platform or sent via email and be visualised on a Google map.

Information on the map reveals some common trends and similar problems across the region.

Over 40 of the reported cases involve legal measures taken against a journalist or a media, suggesting the pressing need of legal support and protection of those affect. Despite the existence of several associations and NGOs offering such support, journalists often fail to get the help they need on time, if ever.

Meanwhile arrests, verbal and physical attacks continue to be used as a tool to scare or discredit professionals. In some cases, journalists are detained in the field without clear explanation or warrant only to be released several hours later, when they can no longer report the event they originally intended.

A high concentration of violations is observed in Turkey, Italy and Serbia.

In Turkey, where 17 cases have been reported, financial and legal pressure seems to be one of the main tools used to silence critical voices.

In Serbia, where 16 cases have been reported, May’s devastating floods unleashed a series of worrying developments that made the international and local community turn their eyes towards the state of media freedom and spreading censorship in the country. For instance, several blogs experienced blockades and attacks after criticizing the government’s role and reaction to the floods.

In Italy 15 cases have been reported, with many involving threats and assault.

The Ushahidi media freedom crowd-sourcing platform has been developed in partnership by Osservatorio Balcani e Caucaso and Index on Censorship. OBC participates in the initiative as part of the EU-funded Safety Net for European Journalists project, implemented in partnership with SEEMO, Ossigeno Informazione, Professor Eugenia Siapera  (Dublin City University).