NEWS
Is press censorship in Serbia "worse than the 1990s"?

Six months after Aleksandar Vucic came to power, there are worrying signs that freedom of the media is deteriorating, Milana Knezevic writes 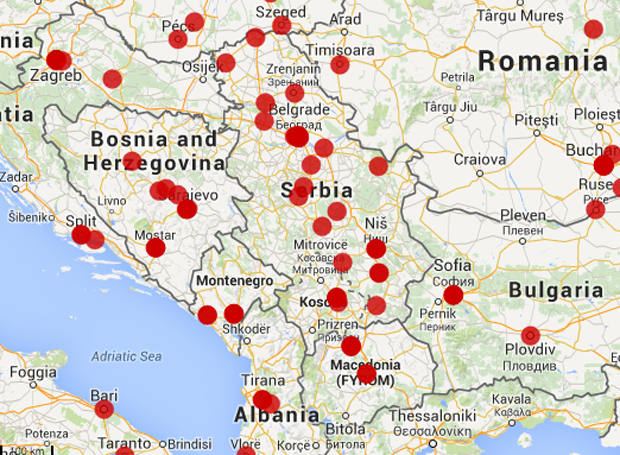 Map of censorship incidents in Serbia via mediafreedom.ushahidi.com

Serbian journalists last night gathered outside the studios of national broadcaster B92, in protest at the decision to cancel politics talk show Utisak Nedelje (Impressions of the Week).

B92 claims the popular show — on air since 1991 — has not been cancelled but postponed due to a breakdown in negotiations with its author and presenter Olja Beckovic, according to news site Balkan Insight. The channel says they had offered to continue broadcasting the show on its national frequency channel — its home since 2002 — until November, when it would be bumped to the cable channel B92 Info. But Beckovic says the show has been banned following political pressure.

“I absolutely never experienced such blackmail and pressure before,” she told website Vesti in an interview published on Friday. “And there’s something very interesting about that. People say this is a return to the 1990s. No it’s not, it’s worse than the 1990s.”

In March, the Progressive Party (SNS) convincingly won Serbia’s general election and its leader Aleksandar Vucic became the prime minister. With a chequered track record on press freedom, both as deputy prime minister in the previous government and as Slobodan Milosevic’s information minister, Index wondered at the time what impact his new role may have on Serbia’s media. Six months on, what is happening with Utisak Nedelje is just the latest addition to a worrying pattern.

It did not take long for claims of censorship to be levelled at the Vucic government. In May, Serbia and surrounding countries were hit by devastating floods. Authorities imposed a temporary state of emergency, which gave them the power to detain people for “inciting panic”. Meanwhile, online criticism of the government’s handling of the crisis was targeted. Critical articles and blogs were removed, and whole websites, including the independent news outlet Pescanik, were blocked and subjected to DDoS attacks. While it is unconfirmed who exactly was behind these incidents, they already then constituted a “worrying trend”, according to the Organisation for Cooperation and Security in Europe (OSCE).

Index has tracked the media freedom situation in Serbia since the early days of the current government. There have been reports of a journalist being interrogated by police for sharing a Facebook post, as well as physical and verbal attacks — often with impunity. But indirect control of media, smear campaigns and other methods of covert “soft censorship” also pose a serious challenge to Serbian press freedom. “Milošević never muzzled the media this perfidiously. His methods were far less sophisticated and everything was out in the open,” said Beckovic. And it seems her colleagues agree that censorship is prevalent. Ninety per cent of journalists responding to a recent survey said censorship and self-censorship does exist in Serbian media, while 73% and 95%, respectively, said the media does not report objectively and critically.

The public dispute between authorities and the Balkan Investigative Journalism Network (Birn) is one example. The group reported that the government paid significantly more than partner Etihad Airways for a nearly equal stake in new company Air Serbia. Vucic denied the story, saying it was based on an unused draft version of the contract. Days later, pro-government newspaper Informer published an article accusing journalists from Birn and Serbia’s Centre for Investigative Journalism (Cins) of stalking and spying on Vucic. Birn has called this a “campaign to discredit” their work.

“I have the impression that the situation is getting worse,” Mehmet Koksal from the European Federation of Journalists (EFJ) told Index. He cites recent reports of Serbian politicians allegedly faking academic qualifications. “In those articles you can easily measure the level of tolerance from the government to independent media owners,” he explains. He says some newspaper that pushed the story were accused in pro-government outlets of carrying out propaganda for foreign countries. “This is the kind of conspiracy theory that we used to see from different countries.” Pescanik was again brought down by DDoS attacks for reporting the story.

Recent amendments to the country’s media laws will see the state withdraw from nearly all media funding by July 2015. The move has been welcomed by many, but as think tank Osservatorio Balcani e Caucaso points out, this alone will have limited impact: “Private tabloids have been for some time the main supporters of the government, and influence is exerted indirectly, mostly through the advertising market.”

Serbia has also adopted a new labour law which was heavily opposed by trade unions. Koksal claims that union leaders have faced media attacks and smear campaigns. If certain media groups or owners have an interest developing good relationships with the Serbian government, he explains, you can “easily understand why they are doing the dirty job” of attacking opposition. But finding out who exactly funds which outlet is not always easy, as bids to increase transparency of ownership has been met with resistance from private media.

After the elections, Index spoke to Lily Lynch, the founder and editor of the English-language online magazine The Balkanist, which used to be based in Belgrade. She recently decided to leave Serbia due to the pressure she has faced as an independent journalists.

“I was pessimistic about the potential for the media situation in Serbia to worsen when the new government, led by Prime Minister Aleksandar Vucic, came to power in March. But I think the mask has slipped much faster than any of us expected,” she tells Index.

Lynch also believes international actors have a role to play in the worsening levels of press freedom in Serbia, explaining how the US embassy in Belgrade earlier this year told her to leave the country until after the election. “It seems the US embassy thought it was probably a better idea if I was gone because we were critical of the Vucic regime, which they supported pretty unambiguously.”

She also argues that international media bears some responsibility. “In the pre-election period, the English-language media was pretty uniform in its portrayal of Vucic as some kind of redemptive success story. There were headlines like ‘From Authoritarian Censor to EU Partner’, or ‘From Nationalist Hawk to Devout Europeanist’,” she says.

“Was it responsible for major, supposedly ‘objective’, well-respected publications to project such an image? I would say no, and it’s something I think we need to look at ourselves.”

Vucic has been widely lauded as a reformer, who has set Serbia firmly on the path to EU accession — the country’s main driver of reforms. In 2015, Serbia will also take over the chairmanship of the OSCE. During that organisation’s ongoing high-level human rights conference, the Serbian delegate said the OSCE region’s freedom of expression and media in will be high on their agenda as chairs. Many would argue they could start the work at home.

Correction 09:34, September 30: An earlier version of the article stated that Mehmet Koksal works for the International Federation of Journalists.

This article was published on Monday September 29 at indexoncensorship.org