Recap report: Is it ever better to censor than to cause offence? 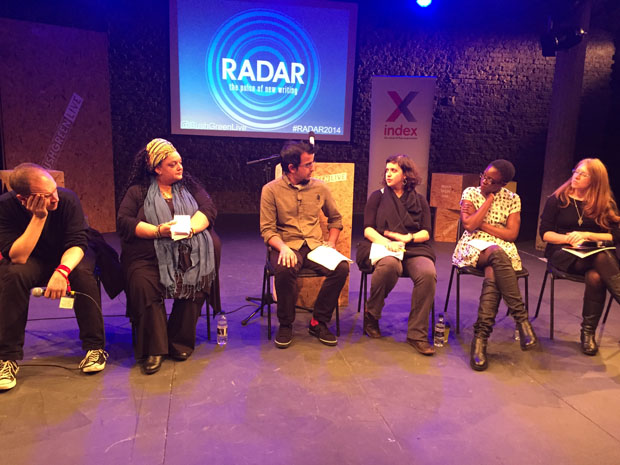 Should there ever be censorship of the arts was the subject of an Index/Bush Theatre debate, held last night. The event was provoked by the cancellation of Exhibit B in London, and Israeli play The City at this year’s Edinburgh Festival Fringe as well as controversy around this year’s Jewish Film Festival, all in the past few months.

Taking part in the debate were, among others: Stella Odunlami, artist and a cast member of Exhibit B; Zita Holbourne, artist, activist and co-organiser of the campaign to boycott the show; and Arik Eshet, artistic director of Incubator Theatre, which produced The City.

An Exhibit B performer Stella Odunlami told the audience: “We, a group of intelligent and informed actors and performers, have been censored and silenced by protestors, who truly have an ill-informed and misguided perspective of this significant and informative piece of work.

We are appalled, outraged, angry…extremely angry as artists, as human beings. We cannot believe that this is London in 2014. We are appalled that Exhibit B has been cancelled because of the actions of some of the demonstrators.”

Protester Zita Holbourne put her point of view as a poem, she said: “We said to them, Barbican please take that down, 2014 and you want to put black people in a cage? Then telling us you don’t understand our outrage!”

Read  their full statements, made to the audience, below.

It is with utter disappointment that we write these words.

Exhibit B is an important work that has given us an education into the lives of other human beings. We believe everybody has the right to their specific story being told, and this work provided that platform, through the medium of art – living and breathing. It is a shame that these stories will no longer be heard, seen, nor felt. An even greater shame that those who were open and brave enough to purchase a ticket, have now been robbed of that experience.

Exhibit B afforded us the opportunity to explore and engage with our past, while reminding and reawakening us to its impact on the present.

To the 23,000 petitioners who complained that Exhibit B objectified human beings – you missed the point.

This is the 21st Century and we believe that everyone has a choice, a right, an entitlement, to do or say whatever they deem to be right for them. We can accept someone seeing the piece and not liking it-that’s fine. What we cannot accept about the events of Tuesday evening and the subsequent cancellation of Exhibit B, is the physical action that was taken outside of the Vaults, by a minority of the demonstrators who would not even entertain the thought of seeing the piece.

We, a group of intelligent and informed actors and performers, have been censored and silenced by protestors, who truly have an ill-informed and misguided perspective of this significant and informative piece of work.

We are appalled, outraged, angry…extremely angry as artists, as human beings. We cannot believe that this is London in 2014. We are appalled that Exhibit B has been cancelled because of the actions of some of the demonstrators.

We are artists who, after thoughtful and careful deliberation, decide what projects we want to work on. Grown men and women who decided that our contribution to Exhibit B would be worthwhile and important. Who, on Tuesday, were told, by way of the protestor’s force, that we couldn’t make creative and life decisions for ourselves.

That complete strangers knew what was best for us.

For all of us.

Our voices and ideas were deemed not worthy of being shared with the world. This is exactly what Exhibit B is about: we want to denounce oppression, racism and bigotry. We want to denounce actions like this. And the fact that this is still happening in London in 2014, proves even more why this piece is necessary.

The anger and vitriol and hysteria which the protestors have and continue to level at the company of Exhibit B, astounds us.

It doesn’t feel rational. It doesn’ t feel measured. There simply has not been room for an exchange of ideas.

There’s such vulnerability in holding a mirror up to humanity. No one wants to see a representation of themselves oppressed, but it doesn’t mean that we shouldn’t look.

We welcome protest, but surely it’s best to have as much information beforehand, so your opinion is truly informed. Surely as a protestor, you have a duty to ensure your ‘peaceful protest’ really is peaceful. And, surely your right to protest should not impact another person’s freedom of thought and speech.

We are actors and performers who believe that art should be meaningful. Challenging. Provoking.

Not only for us, as participating collaborators in the work, but also for the audience who witness the work.

This project afforded us the opportunity to be the most vulnerable, most on display, silently engaging and being engaged, while exploring themes around other, sex, race, and gender.

Exhibit B was created with love and sensitivity. We are intelligent creatives who made a brave choice to be part of a thought provoking piece of work. As Londoners, we are embarrassed that this has happened in our city, as the show has already been seen by 25,000 people from all over the world, and will continue to tour.

We would like to thank the Barbican for their immense support and Brett Bailey for his inspired work.

Zita Holbourne read Prejudice, Privilege, Power: A Poem for the Barbican (listen to it here)

Barbican announced a human zoo in town
We said to them, Barbican please take that down
2014 and you want to put black people in a cage?
Then telling us you don’t understand our outrage!

Strapped to plane seats, placed in iron masks
And nobody in a whole arts institution thought to ask
Our views before taking a decision to host
Then you have the bare faced audacity to boast

We’re forced to battle daily with modern day enslavement
Power and privilege versus our self-empowerment
You are arrogant telling those of us that live with racism every day
What is or is not racist, like we don’t have a say

Blocked by institutions, so take a moment, pause
Think about the anger and pain you cause
By insulting our ancestors, our histories
Adding insult to our multiple injuries

Using the very arts that you claim to stand for
To demonstrate our strength of feeling outside the door
We made music, danced, lifted our voices in song
Displayed placards that had our beautiful art on

Yet you state that we were extreme and threatening
In contrast, press there say we were peaceful and welcoming
Police confirm there was no damage, injury or arrest
So perhaps it’s you trying to censor our right to protest

Their singing was threatening is what the headlines say
Brandishing placards and drums that barred the way
You accuse us of blocking freedom of expression
But then you call our expression aggression!

What does this say about you as a leading arts institution?
When you resort to this vicious persecution
Barbican you are cowardly and insincere
Resorting to this malicious smear

You simply confirm what we said from the start
You are defending racism in the name of art
When prejudice, privilege and power are combined
Institutional racism becomes clearly defined.

Arik Eshet, Artistic Director of Incubator Theatre, spoke via Skype about the cancellation of The City at the Edinburgh Fringe Festival

The Index/Bush Theatre debate was part of the RADAR Festival.

This article was posted on 14 November 2014 at indexoncensorship.org