NEWS
Padraig Reidy: Page 3 is an example of how free speech works
22 Jan 2015
BY PADRAIG REIDY 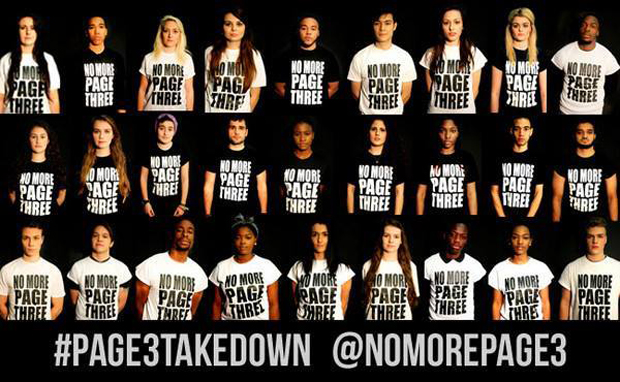 Does The Sun’s Page 3 still exist? The paper’s pagination remains, humble but resolute: the very best in British pagination. As surely as curry follows beer on this sceptered isle, the nation’s favourite newspaper will have a third page, facing the second page, on the reverse of the fourth. And despite what those who would disparage our way of life would want, it will always be page three.

Briefly, this week though, it seemed the tradition (est 1970), of putting a picture of a topless young woman on page three — the “Page 3 girl” — had ended. And then it came back. What’s going on? Is there a Page 3 or isn’t there? Or are we witnessing Shroedinger’s glamour shot?

The Page 3 girl was a typical product of the British sexual revolution. What started, with the availability of contraception to women in the 1960s, as a liberation, quickly became another way to reduce them. Freed from the terror of unwanted pregnancy, women and girls were now expected to be in a permanent state of up-for-it-ness. The popular films of the late 60s and early 70s, the On The Buses, the Carry Ons, the Confessions…, portrayed British society as a parade of priapic middle-aged men, always attempting to escape their middle-aged, old-fashioned wives, in pursuit of seemingly countless, always available, young women.

It was fun, it was cheeky, it was vampiric — depending on how you wanted to look at it.

Page 3 was part of this culture; this idea that sweet-natured young women with absolutely no qualms about sex were out there, just needing a wink and a Sid James cackle to persuade them into a bit of slap and tickle. Slap and tickle, though, is not the same as sex, or at least not sex as we might hope to understand it. The slap and tickle of the British imagination owes more to the pre-pill “sort of bargaining” described by Philip Larkin. In spite of the poet’s hopes, sexual intercourse hadn’t really begun in 1963.

The phenomenon survived the attentions of feminist campaigns of varying strengths. Page 3 perhaps peaked in the 80s, when it was possible to move beyond the tabloids to become an actual star, even with clothes on (80s Page 3 icon Sam Fox is still, apparently, in demand as a singer in eastern Europe). This, ironically, coincided with an era of politically correct criticism of Page 3 led by senior Labour MP Clare Short.

In the 90s, new laddism, spearheaded by James Brown’s Loaded magazine, somewhat rehabilitated the Page 3 girl, or, more accurately, made looking at topless models seem respectable to men who would never buy the Sun (“men who should know better” as Loaded’s tagline went).

As the post-Loaded rush for young men’s money descended into boasting of nipple counts, the focus of feminist campaigning switched to the weekly Nuts and Zoo magazines. The Sun’s Page 3 carried on, outliving the rise and fall of Nuts (somehow, Zoo is still going), but is now taking a severe battering from the No More Page 3 campaign, led by young feminists. The very fact that there is uncertainty over the future of the feature is testament to that campaign’s success.

It would be easy to look for a free speech angle on this and come up with “killjoy feminists” versus, decent honest yeomen of England.

But it would be false. In truth, what we have here is an example of how free speech works. The No More Page 3 campaign, as it has pointed out, has a right to call for an end to something they don’t like. They make the argument, they are criticised, and that’s absolutely fine. No one gets hurt, no one goes to court, no one tries to pass a prohibitive law (yet).

Meanwhile, there are some half-hearted defences floating around, mostly attempting to claim that Page 3 is a PROUD BRITISH INSTITUTION, like ugly dogs or barely suppressed tears.

“Tradition!”, the defenders shout, like a legion of leery, thigh-rubbing Topols. The Daily Star, which runs pictures of topless women on its own Page 3, but has escaped the ire of campaigners for the fundamental reason that no one really cares what’s in the Daily Star, proclaimed: “Page 3 is as British as roast beef and Yorkshire pud, fish and chips and seaside postcards. The Daily Star is about fun and cheering people up. And that will definitely continue!”. But really, it all seems a bit half-hearted.

Fundamentally, this week’s wind-up aside, The Sun’s topless Page 3 will cease to exist because people don’t really want it to exist, and no one can really think of a good reason for it to exist.

It’s not censorship, or prudishness, that will eventually kill Page 3. We’ve moved on, regardless of what the editors of The Sun do or say. It’s not them; it’s us.

This article was posted on 22 January, 2015 at indexoncensorship.org.