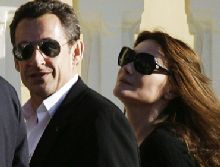 As President Nicolas Sarkozy visits Britain, Natasha Lehrer looks at the changing relationship between France’s political elite and the media

In a radical break with French tradition, the amorous antics of the country’s President have lately become fair game for the French press. Famously, de Gaulle was the only post-war president to have remained faithful to his wife. President Mitterrand’s mistress and daughter lived in elegant anonymity for 20 years in a stunning rive gauche apartment, with rent was paid by the state, untroubled by any press intrusion into the couple’s private life whatsoever. But since Sarkozy came to power the hallowed French tradition of respect for the private lives of the famous and powerful appears to have begun to change.

As recently as last May, the old pieties regarding privacy were still being spouted when it was ‘revealed’ that the presidential candidate, Segolène Royal, had officially split up with her long-time partner, Socialist Party (PS) leader François Hollande. That there was trouble in paradise between the first couple of the PS was one of the worst kept secrets in Paris, but sticking to the old-fashioned Mitterand principle, no mention of it had ever appeared in the media, even in the outlets who favoured a win by Sarkozy. Worse, when it did come out, in a press release from Royal herself, there was a palpable sense of outrage amongst the Parisian chattering classes that the cardinal rule that the hoi polloi has no business knowing anything of the intimate lives of those in the public eye had been broken.

In 2006, when Sarkozy was Interior Minister in former President Chirac’s government, he apparently put pressure on business tycoon Arnaud Lagardère, head of Hachette Filipacchi Médias (HFM), which owns Paris Match, to fire the editor of Paris Match after the magazine published photographs of Cecilia Sarkozy in a clinch with Richard Attias, the man she recently married in New York. Yet a little more than a year later the new president seemed, in his enthusiasm to adopt a more Anglo-Saxon way of doing things, keen to participate in shattering some of the old privacy taboos. The now infamous photo opportunity with Carla Bruni at his side at Disneyland Paris, the quease-inducing shots of them sunbathing on an Egyptian beach, all seemed to be part of a revolution in a country which has long relied on a set of quaintly Gallic patrician values that in Anglo-Saxon countries might be more rudely known as hypocrisy.

Vivienne Walt, the Paris correspondent of Time magazine, has said that she thinks there has been ‘a fundamental change’ in the French media, brought about largely by Sarkozy himself.

‘Most newspapers are doing exceedingly badly and are under pressure to be a lot more feisty, a lot more critical and to compete with glossy magazines on the newsstand. At the same time, Sarkozy is very close to a lot of media barons and he has managed to create for himself a sort of phenomenon. He has almost become an icon, a complete media animal.’

The latest story to have the airwaves buzzing, the mysterious affaire of the pre-nuptual text message to Cecilia, suggests that old habits die hard. In an echo of his Paris Match intervention, Sarkozy announced that he was going to sue a journalist at Le Nouvel Observateur after the magazine published a text message purportedly sent from Sarkozy to Cecilia offering to call off his impending marriage to Bruni if his ex-wife would take him back. (Cecilia denies having received the message and the journalist in question admits that he didn’t actually see it, so frankly the fact that the story got up Sarkozy’s nose isn’t entirely surprising.)

Though all of these faits divers are perfectly fascinating, the stories of who the president is, or wishes he were, schtupping, risk turning the focus away from real and serious issues in France regarding freedom of the press. Anglo-Saxon assumptions — impossible to imagine the British tabloids keeping their fangs off a prime ministerial candidate whose married life was known to be a total sham — about freedom of the press are simply not held here. Witness the occasion when, on 26 March 2005, L’Express newspaper reported that the prime minister’s office had made a call during the 2005 referendum debate ordering France Television to withdraw an invitation to José Manuel Barroso, then President of the EU commission, to appear on television, saying the debate would displease then president Chirac. Where was the uproar? There was none. No opinion pieces, no outrage. This is how things are done in France, appeared to be the message of the all but non-existent reporting of the affair; not a single journalist spoke out against the principle of intervention in the workings of the media by the president.

Perhaps the text message affaire is after all more than just a fait divers. It may turn out that Sarkozy’s clumsy attempts to manipulate the press are finally going to turn the media, who have so long accepted the cosy relationship with the Elysee Palace, against him. Perhaps in their offended fury at being so clumsily manipulated by their self-serving president they will begin to cast a self-critical eye on the self-censorship that has for far too long been the habit of a great swathe of the French media.