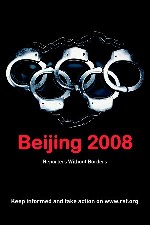 The increasingly farcical Olympic torch relay made its way to California yesterday. Lucie Morilllon of Reporters Without Borders was there

After the London and Paris demonstrations that disrupted the Olympics torch relay and angered Chinese officials, the world’s eyes were on San Francisco — the next city scheduled to welcome, 9 April, the symbol of the most controversial Games since Moscow 1980. A large proportion of the city’s population is Asian. The day before, exactly four months before the opening ceremony in Beijing, thousands of people attended a pro-Tibet rally and vigil with speeches by Desmond Tutu and actor Richard Gere. Other demonstrations had taken place before that event, including one involving activists who climbed the Golden Gate Bridge to display ‘Free Tibet’ flags. Protesters were warming up for the next day, as were the San Francisco police, the city’s officials, and the Beijing Olympic Committee. The route had already been shortened from eight to six miles, and was announced at the last minute in a clear attempt to prevent demonstrators from making plans well in advance. San Francisco Mayor Gavin Newsom had made sure that he would have some flexibility in addressing the issue. He said that the route could be changed at any time, depending upon how the situation evolved.

The torch relay was originally scheduled to start off at 1pm from McCovey Cove, follow the waterfront to Fisherman’s Wharf, and head back to Justin Herman Plaza. I decided to go out to keep track of the demonstrations at about 10.30am. My hotel was a couple of blocks from the Embarcadero. As soon as I left, I bumped into a group of pro-Tibet demonstrators, all carrying flags and posters. I followed them down the avenue. On our way, we encountered groups of pro-Chinese government protestors carrying huge Chinese and Bejing 2008 flags. The Chinese authorities had obviously decided to play the PR game and send their own people to counter the visibility of their opponents. The closer we got to the Justin Herman Plaza, where the closing ceremony was supposed to take place, the more the various groups of protesters began to intermingle and confront each other, sometimes resorting to verbal provocation and insults. A group of Olympic supporters came across some Tibetan monks and started yelling at them. At this stage I was worried that even a single gesture could turn the situation violent. But the Tibetan monks went on, while their followers made peace signs. The pro-Chinese protesters were playing drums to drown out the loud heckling on one side and cheers on the other.

There weren’t many police officers around the plaza, which I interpreted to mean that we would not see the torch there. The police looked nonchalant. I know San Francisco is accustomed to protests, but still! A friend stationed at the relay starting point called me to say that it was a different story over there. Two ranks of policemen, standing shoulder–to-shoulder, were stationed in front of the protesters.

As 1 pm drew closer, the crowd thickened and grew louder. The Tibet supporters outnumbered the Burmese, Uighurs, ‘Save Darfur’ campaigners, and other human rights groups. Different slogans could be heard: ‘Free Tibet,’ ‘China lies, people die,’ ‘Human rights in China,’ ‘China, out of Tibet, NOW’. At one point someone with a Chinese flag was pushed out of the crowd into the road secured by the police. As they began to arrest him, people got agitated, but not for long. When the police realised he didn’t do it on purpose, they let him go after escorting him out of the crowd.

At about 1.20pm, the police put their helmets on, and the crowd started shouting even louder, expecting the torch to arrive. Suddenly the police gathered and ran westward, out of the area, and away from the waterfront. This enabled the demonstrators to step off the sidewalks where they had been contained and invade the road, but they soon realised the police departure meant that the torch was not heading their way. All sorts of rumours were spreading around: the torch was being carried by boat, the relay had been cancelled, and so on. Total confusion reigned. Nobody knew what was going on. I had been texting a few reporters who told me they had no more clue than I did. I wished I could be in one of the helicopters flying over us to learn more. I called a friend and asked him to use the Internet to find out what was happening. He called me back a few times with conflicting information, before he found out that the torch had been on a bus, then in another street, and was at that time on its way to the Golden Gate Bridge. Some people were still hoping that the torch would be carried back to Herman Plaza, where the closing ceremony was supposed to take place. I found a good spot to stand, where I managed to set up a banner for Reporters Without Borders’ campaign. We waited and waited. At 3pm the crowd was growing more impatient. By 3.30pm, a couple of dozen police officers were around us. More of them arrived on bikes to block the progress of a replica tank built by Team Tibet that was moving down the road. It was surrounded by fake monks being beaten up by fake Chinese police.

By 4pm, the general frustration intensified as it became clear that the Olympic torch was not coming at all. Demonstrators milled around for a while. Insults were exchanged between supporters and critics of the Chinese regime, but soon afterward the protesters began to leave. I could hear some of them grumbling that they had taken the day off for nothing, that the mayor of San Francisco had been a coward to keep the torch out of sight, and what was the point anyway of letting a torch go through a city if nobody could see it. The disappointment was palpable. I walked around for a bit, before stopping at a rally set up by the Free Tibet group in a nearby park. People were sitting on the grass, listening to speakers and cheering again. Later, I found out that a few very minor incidents took place. The fear of violence suddenly seemed overrated.