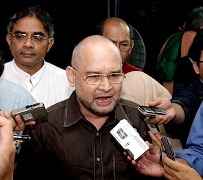 
Tan is a young Malaysian, newly employed in the private sector. Like many Malaysians his age, Tan is a product of the Mahathir era, having heeded the call to get a degree, and help Malaysia develop into a knowledge economy. Tan is bright and discerning. And Tan is unhappy with many things happening in Malaysia. He does not write to a local newspaper with his complaints. He posts them on his blog.

Like many young Malaysians, Tan is well-versed with the Web 2.0 functionalities. Shunning mainstream news, whether it be print or broadcast, young (and some older) Malaysians obtain information, exchange ideas and have forums online. The emergence of Tan’s generation has left the authorities in a dilemma. Having been so used to controlling what makes the news, authorities were ill-prepared for the amount and range of information the Internet has given the population. In what appears to be a hasty post-election afterthought, calls for the establishment of a media watchdog have been resurrected.

In June 2008, Malaysia’s Home Minister, Syed Hamid Albar, was reported to have announced that his ministry had plans to meet with media organisations to formulate a policy for the creation of the proposed press council. Following this, the Foreign Minister, Rais Yatim, called for bloggers to be monitored by some form of watchdog council.

Calls for a Malaysian Media Press Council were mooted as far back as 2001, both by the government and opposition. A bill was drafted by the Malaysian Press Institute, planned for tabling in Parliament in 2003. The bill was criticised by many groups, for example, Article 19, which stated that the bill did not really establish an independent body, separate from the state and politics. It was also reported that Malaysia’s National Union of Journalists did not accept the bill, as its members feared that journalists were not well represented in the council and that it might impose more restrictions on local media.

Because of this lack of support, the initiative lost steam until 2005, when the call for a media watchdog was again revived.

In the initial bid, the then Information Parliamentary Secretary, Zainuddin Maidin, had stated that one of the most important functions of a Malaysian Media Council would be to ensure the journalists toed the line on political and social sensitivite issues, so that chief editors could contend with problems like ‘company bottom line, staff salaries, bonuses, misuse of courts by con-artists, legal practitioners out to make a quick buck and the opposition’. Meanwhile, opposition stalwart Lim Kit Siang stated in a 2001 press release that an ‘independent high-powered media council’ was needed to promote free and responsible press, with powers to expose all instances of irresponsible foreign and local reporting.

Now the media landscape is quite different. While blogs and Internet news portals were not that popular in 2001, they are the source of news for most urbanites. In fact, news sourcing from the Internet has given people such a different view of local politics that many credit the Internet with causing the ruling coalition party to fail to secure two-thirds majority in parliament during the election of March this year.

It was a matter of both demand and supply. While Malaysiakini has been the main alternative online news site for close to a decade, together with the controversial Malaysia Today news portal (the editor of which, Raja Petra Kamaruddin, is currently being held by police on suspicion of ‘dissent’), the months leading to the March 2008 elections saw two more news sites, Malaysia Votes (now transformed into the Nut Graph), and the popular the Malaysian Insider, come into being. At that time, personal blogs also experienced high hit counts.

Information from the Internet was printed in pamphlets and disseminated, or referred to, during the election campaign talks and rallies. The Merdeka Center’s director, Ibrahim Suffian, said at a press conference on 4 September that this was how news reached many rural communities during the March 2008 election.

It is also the case that Malaysians have grown bolder since the March elections. Having failed to get two-thirds majority in parliament, the ruling coalition may find it a challenge to pass a bill or amend the federal constitution. Emboldened, bloggers have been expressing their anti-government views online. For example, blogger Bakaq, aka Penarik Beca, recently spoke up against the police, and is now being investigated for sedition. Another blogger, Sheih, aka kickdefella, expressed indignation at the loss of jobs due to a new ruling regarding petrol kiosks, requesting other bloggers to post the Malaysian flag upside down as a sign of distress. He too is now being investigated for sedition. Of course, blogger and news site editor of Malaysia Today, Raja Petra Kamarudin (or RPK), is subject not only to sedition charges, but also to several defamation suits. His news portal was also recently blocked by the Malaysian Communications and Multimedia Commission (MCMC), although this decision was subsequently found to have breached Malaysian law, and the site was reinstated last week.

But for the government, the situation seems to be getting out hand, explaining perhaps why Foreign Minister, Rais Yatim, has called for a watchdog on online media.

It appears that the development of a media council in Malaysia is at a stalemate for both government and journalists. There is currently a barrage of legislation already curtailing media freedom, namely the Printing Presses and Publications Act 1984, the Official Secrets Act 1972, the Internal Security Act 1960, the Sedition Act 1948, the Communications & Multimedia Act 1998, the Computer Crimes Act 1997 and the criminal defamation provisions under the Penal Code. The press and some of the public are reluctant to support a media council without the other forms of regulation first being abolished.

Some don’t consider the prospect of abolition of these controls likely, because many of the legislations listed above fall under the portfolios of differing ministries. For example, the Printing Presses and Publications Act 1984 comes under the auspices of the Home Ministry, while the Communications & Multimedia Act 1998 is under the Energy, Waters and Communication Minister’s portfolio. Meanwhile, the calls for a press council have been from the Information Ministry. As such, if or when the press council is established, many are sceptical if any of the other ministries would willingly give up their sway on information.

The press and the public can hardly be blamed for being sceptical about a press council. For example, while the Communications & Multimedia Act 1998 disallows the censorship of the Internet, and the Multimedia Super Corridor (MSC) Malaysia’s Bill of Guarantees promises no Internet censorship, the authorities were still able to block the Malaysia Today news portal, albeit briefly. As such, it seems the trust between Joe Public and the authorities has eroded to the point where nothing promised is believed until and unless it is actually executed.