NEWS
Webmaster trial in Thailand: A case of 'shooting the messenger'
21 Feb 2011
BY JUDITH TOWNEND

The case of Chiranuch Premchaiporn, the webmaster on trial in Bangkok, has far-reaching implications for freedom of speech – not just in Thailand, but in the wider region too, argues Gayathry Venkiteswaran 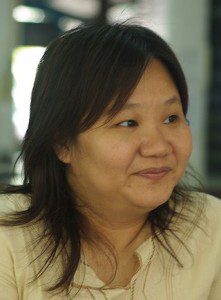 Chiranuch Premchaiporn of the popular website Prachatai.com, stands accused under Section 15 of the act for not taking down allegedly anti-monarchy comments from the website fast enough (Photo, right: Premchaiporn, via Oso on Flickr).

The trial has drawn international attention for its potential impact on freedom of expression, not just in the country, but also on the cyber community around the world.

An uncertain political climate in Thailand (confrontations followed the military coup in 2006 and elections are expected in 2011) makes this case’s implication on freedom of speech very important.

Chiranuch, known affectionately among her friends and colleagues as Jiew, faces the bleak possibility of a 50-year prison term for facilitating public expression.

It’s a typical case of shooting the messenger. Intermediaries are explicitly held responsible for content offences under the Thai law; a situation condemned by freedom of expression and human rights advocates.

Prachatai is a popular website that, at its peak, had 450,000 hits per week. The website was blocked during the emergency period declared in April last year following political clashes, and it has had to find alternative platforms to publish.

Its message board, however, is the subject of the trial. The charges against Chiranuch relate to ten forum topics posted at different times in 2008, for anonymous comments deemed lese majeste.

Even though Chiranuch took down the posts and the authorities acknowledged the response to their interventions, they charge she should not have let the comments go through at all.

The harsh reality of the CCA is that it hinges on the country’s Criminal Code, in particular, offences regarding national security, one of which is defaming the royal family.

Article 112 of the Criminal Code states that whoever insults, defames or threatens the royal family, if found guilty, can be subject to imprisonment of three to 15 years. Non-Thai residents are also subject to the law.

According to a December 2010 report released by the iLaw Project on the control and censorship of online media, between July 2007 and July 2010, 185 cases were recorded under the CCA, of which 37 cases or 20 per cent involved lese majeste content and national security.

Other cases have also shown that there is a fine line between libel and criticism, making it extremely challenging for civil society, individuals and the media to navigate political discourse.

This is reflected by the minimal local media coverage of the case, in contrast to the foreign interest in the issue. In the current political climate, local media strives to avoid accusations of bias towards the government critics.

The media has maintained that it is able to operate freely in Thailand but it is threatened by the exploding popularity of internet technology, as blogs, websites and social networking sites take up political and social issues aggressively.

During the emergency period last year from April to December, Freedom Against Censorship in Thailand reported that there were more than 400,000 websites that were blocked, but none have been referred to the court after the lifting of the emergency decree.

Apart from Chiranuch, others have also faced trial and conviction for lese majeste under the CCA. One of them, website designer Thanthawuth Thaweewarodomkul, was recently tried under the same law for allowing posts deemed defamatory to the King on his web forum, and is awaiting judgment. 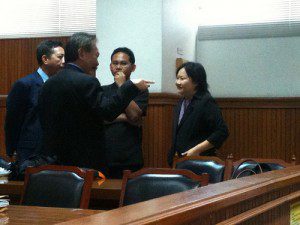 On Friday 11 February 2011, five of the 11 prosecution witnesses – representing the Ministry of Information and Communication Technology and police investigators – testified in Chiranuch’s case, providing an insight into the procedures for determining defamatory content and conducting investigations related to the internet.

The trial, which was scheduled to end on 17 February, has been postponed to September and October to accommodate the long list of witnesses (Photo, left: Chiranuch Premchaiporn in court with her lawyers, via boellstiftung on Flickr).

Criticism of the law

The trial has given rise to criticism of the law: it gives vast powers to the authorities to investigate and gather evidence in computer related offences, but the application of the powers are not clearly spelt out. Disclosure of vague procedures and guidelines may cast doubt on the thoroughness of the recommendations for Chiranuch’s arrest and charges.

For instance, the ministry’s lawyer admitted that it was convenient to go after the intermediary because it was not as easy to identify those who have posted comments with pseudonyms and that internet protocol (IP) addresses may be manipulated.

The prosecution witnesses also admitted there were no clear guidelines on what constituted inappropriate comments; that recommendations for court injunction were not accompanied by hard copy evidence of the violations; and that the defendant had always cooperated with the authorities either by complying with the request to take down posts or during the investigations.

The defence is expected to focus on arguments that intermediaries like web owners and internet service providers (ISPs) should not have the same level of responsibility for content posted by third party users, a common trend in countries where freedom of expression is more restricted.

Netizens and freedom of expression advocates argue that the CCA, which came into existence after the military coup of 2006, is a tool to suppress opinion. It authorises the blocking of websites on the grounds of security and good morals, they say.

The trial is relevant for the wider region too. The Southeast Asian Press Alliance reported in its year end report for 2010 that bloggers and internet activists in Vietnam who wrote about controversial issues such as the government award of a bauxite mining concession to a Chinese company, have been arrested and harassed by the authorities.

In Malaysia, the government is seriously considering amendments to press and sedition laws to cover cyberspace, including social networking tools like Facebook.

In Indonesia, the government is considering a new law to address the convergence of the media and telecommunications industry, in a bid to regulate content. The proposal includes licensing of content providers, such as the online media, which goes against the freedoms set out in the 1999 Press Law.

The Singaporean government recently issued a gazette order to The Online Citizen, a popular citizen journalism news site, under the Political Donations Act. It brings it under closer scrutiny of the government and limits the site’s freedom to write about politics at a time when general elections are expected.

One response to “Webmaster trial in Thailand: A case of ‘shooting the messenger’”